California Citrus growers were up all night trying to protect their crops from an “epic” cold spell which is dropping temperatures into the twenties and as cold as twelve degrees. Temperatures twenty to thirty degrees below normal are also stranding motorists and threatening zoo animals.  A headline in Silicon Valley’s Mercury News proclaimed that California has gone from “golden to frozen.”

Extreme weather in the United States?  We read the news reports with great interest looking for the obligatory mention of climate change, but since it’s cold, forget climate.  We don’t even get the ever fascinating ‘warming is making it colder’ line of distorted reasoning.

“This is definitely a polar outbreak,” the LA Times reports California climatologist Bill Patzert as saying and goes on to report his prediction that their will likely be record lows.

Record cold is killing people and livestock in Russia and China with China experiencing its coldest weather in decades and Russia the coldest since 1938 — colder than the winter of 1941-1942 which helped destroy the invading German army.  “Rare” snow shut down Jerusalem.

Yet, the media is not reporting that California’s deep freeze, nor the destructive cold in eastern hemisphere countries, provides evidence of a new ice age, global freezing, nor final disproof of the theory of man-made global warming.  Rightfully so, as nothing of the sort would be valid.  What we have here is naturally variable weather, the kind of harsh winter we prepare for and cope with when it strikes.

Yet that same media does not hesitate to attribute unseasonable warmth as evidence of global warming.  The  New York Times just attributed an overall pleasant U.S. winter in 2012 to the “backdrop of global warming caused by the human release of greenhouse gases.”  This conveniently ignores the fact that the U.S. occupies less than 2% of the globe.  It also conveniently ignores natural weather variability.  Focusing on one year of U.S. weather (a year with the kind of winter most people prefer) tells us nothing about global or long-term climate trends. 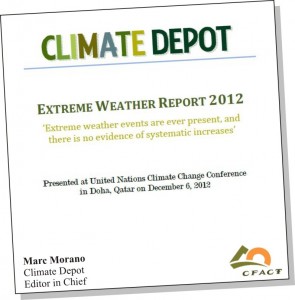 weather in 2012 to global warming and blaming it for severe storms, despite the fact that storm activity in recent years is in no way unusual and in many ways unusually mild.  See CFACT’s Climate Depot extreme weather report in which Marc Morano thoroughly debunks the “extreme weather” myth.

Claims that 2012 was the U.S. hottest, may well fall apart when we look at the way the data has been adjusted to make it seem so and 1934 may regain the crown.

Global warming campaigners and their media echo chamber can’t have it both ways.  They can’t continue to report warm weather as evidencing global warming while treating cold weather as natural.  ‘Crops destroyed, people dying of cold?  Nothing to see here folks, move along.’

So long as the media continues to hype the warm, downplay the cold and attribute storms to global warming, public trust in their reporting will continue to erode.  Similarly they should end the sloppy practice of reporting extreme statements by radical climate campaigners (for instance WWF) as scientific fact.  When scientists engage in similar propaganda the damage is worse — shaking public confidence in science itself.

CFACT knows the difference between weather and climate and remains prepared to continually educate those who cannot grasp the distinction.