Ronald Reagan used to say the closest thing to eternal life on earth is a government program. If true, the UN climate change bureaucracy presently gathered this week in Bonn is definitely a case in point.

The UNFCCC was created to carry out the climate change agreement first forged in Rio back in 1992. Since that time it has carried out its mission through regularly scheduled “conferences of the parties” every year – usually held in glamorous cities like Copenhagen, Cancun, Marrakech, and The Hague, among others. In its heyday, the UNFCCC produced a binding treaty, the Kyoto Protocol (the U.S. never joined), which, although poorly designed and scientifically meaningless, at least provided the climate bureaucracy some raison d’etre. But the Kyoto Protocol expired in 2012 shortly after the best attempt to create a successor to it crashed and burned in Copenhagen a few years before. Since that time, Kyoto’s only been extended for those interested in continuing it (which aren’t many), and there’s been no meaningful replacement everyone can agree on. Of course, this hasn’t kept this climate bureaucracy from continuing to try.

It’s becoming apparent that so long as there’s taxpayer money and nice venues to hold conferences, there’s probably going to be no end to these regularly scheduled gatherings of international bureaucrats attempting to clamp down on our economy and regulate the weather. The confab here in Bonn has dreams of a new climate change treaty by 2015. They don’t have all the particulars down yet, but they have found a suitable city in keeping with their refined tastes when it’s ready to be signed – Paris. 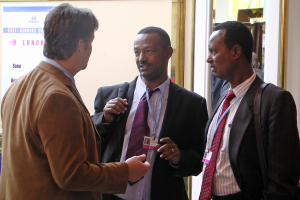 To get them there, they’re relying on two different ad hoc groups working on different aspects of the new treaty. One is called the Subsidiary Body for Implementation (SBI), which looks at the proposed action plans nations are making to deal with alleged global warming. The second is called the Subsidiary Body for Science and Technological Advice (SBSTA) which reviews emissions inventories, compliance and other scientific methodologies the climate bureaucrats say is necessary for carrying out their new proposed treaty. Needless to say, the subject matter for both of these ad hoc groups can be rather tedious and technical — exacerbating the impact of any jet lag one might have experienced getting to Bonn. But they are both important to follow.

Yesterday, those involved with SBI took a day off, as the Russian delegation threw a bit of a temper tantrum and held up releasing the agenda. Since there was no agenda, there was no discussion, so delegates were free to go enjoy a German beer if they chose. A Greenpeace spokesman surmised the Russian action was probably a result of their protest over what has become known as the “hot air” controversy stemming back to the negotiations last December in Doha. It was in Doha that the UNFCCC pulled the plug on all the emissions credits Russia had acquired under the first Kyoto agreement and told them they couldn’t carry them forward into the a treaty. Russia, which said it wasn’t going along with a second Kyoto and probably a new treaty, still wanted to keep its credits anyway – presumably to sell them to whomever decides to sign aboard. The dispute was supposedly resolved when chairman Christiana Figueres informed the Russians any new document would include language they would like – but it’s unclear if the Russians were still completely happy. Yesterday it may have signaled otherwise. and a host of other similar, technical matters. Particularly vocal were small island states like Saint Lucia and Tuvalu, which repeatedly spoke up and voiced concerns that parroted green calls for greater oversight of developed nations. A spokesman for the Philippines also commented that “climate change needs to be seen in the broader goals of sustainable development,” jargon that is increasingly common for those pushing the radical green agenda. The actions of the chair, however, was to simply pass down to various subcommittees all these items for “further discussion.” Perhaps as the conference goes on it’ll become clear how these various items pan out.

Of course, missing in the whole discussion here in Bonn is any mention of the evolving science that casts doubt on the need for a new treaty. Many of the climate models that were first used to create panic in the early ’90’s have proven to be abysmally wrong. As CFACT’s Marc Morano has shown in his Extreme Weather Report 2012, there have not been the increases in catastrophic weather events (hurricanes, tornadoes, wildfires, and the like) global warming alarmists feared would happen, and in fact the Hadley center has not recorded any increase in global temperatures in 16 years – nearly as long as the global warming bureaucracy has been in existence!

CFACT will hold a press conference on Wednesday bringing out many of these points, but it’s likely to fall on bureaucratic deaf ears here in Bonn. They have a vested interest, as Ronald Reagan noted above, in seeing their climate program go to “infinity and beyond.” We remain optimistic though that the public and policy leaders will eventually catch onto the game being played. Clearly government spending priorities and the public interest are better served by not footing the bill for bureaucrats to attend expensive conferences, like this one in Bonn.

For now their intention is clear — A fully binding climate treaty signed in Paris in 2015 with the U.S. on board.