On September seventh Australians tossed out their government and provided Tony Abbott, their new Prime Minister, with a sweeping mandate to scrap the (justly) hated tax on CO2.

This week Abbott was able to assemble a coalition in the Senate which voted 39 to 32 to eliminate the tax.  Abbott’s Liberal/National bloc controls 33 seats to Labor’s 25, but a proportional voting system awarded 18 seats to smaller parties.

In a television interview Abbott said, “People will notice a significant difference when they get their next quarterly power bill. We’ve had a number of power companies writing to their customers, advertising today, saying that prices will come down and those reductions will be backdated to the 1st of July.” 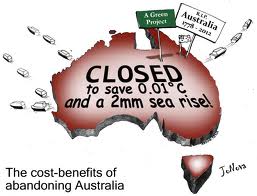 Even if climate computer models were spot on, and we’ve reported many times that they have never been right, under the modelers own assumptions, the Australian carbon tax was completely useless.

Like just about every “solution” global warming ideologues push on the rest of us, the Australian carbon tax imposed crushing economic burdens while providing no meaningful benefit to the environment.

Australia’s move represents a significant rollback of a useless global warming policy by a major nation which spotted the folly and took action in time.

Let’s hope others learn from their example.

Good on ya, Australia!