Why Was $66 billion spent on renewables before the Texas blackouts?

The oldest maxim in politics is “follow the money.” That maxim also applies to electric grids.

Following the billions of dollars that have been spent on the Texas grid explains why the state continues to have electricity shortages. On Monday, ERCOT, the state’s troubled grid operator, asked Texans to reduce their electricity use. That request came exactly four months after Texas residents were asked to conserve electricity due to a massive winter storm.

Before going further, I’ll give you the punchline: As I explained in these pages in April, about $66 billion was spent on wind and solar in Texas in the years before the deadly February storm that left millions of Texans without electricity. In return for that $66 billion, the wind and solar sectors collected about $21.7 billion in local, state, and federal subsidies and incentives. That first figure comes from the wind energy and solar energy lobbies. The latter number comes from a report published last week by veteran Texas energy analyst Bill Peacock of The Energy Alliance.

Thus for every dollar spent by the wind and solar sectors in Texas, they got roughly 33 cents from taxpayers. By any measure, this is an outrageous level of subsidization. And Texans are learning that the tens of billions of dollars spent on wind and solar are not translating into reliable electricity. As you can see in the graphic above, when power demand in Texas spikes, as it has this week, large segments of the state’s vast fleet of wind turbines – some 32,000 megawatts – like to head to Cancun with Sen. Ted Cruz for some vacation time. 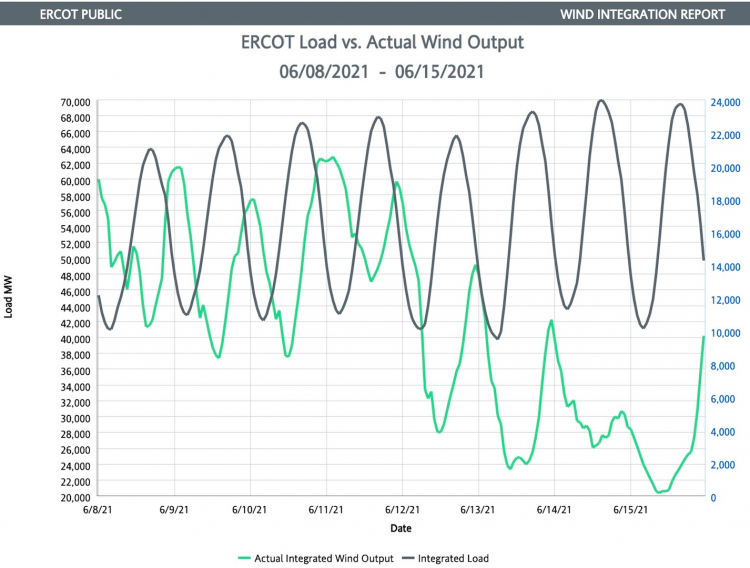 Therein lies the biggest challenge facing Texas regulators and policymakers. The tax abatements, subsidies, and tax credits that are being doled out at the local, state, and federal levels favor the deployment of intermittent wind and solar. But during times of high demand, wind and solar often disappear and all of the load is expected to be met with traditional generation plants. But those traditional plants (nuclear, coal, and natural gas) don’t get the lavish subsidies being given to renewables. Further, those plants aren’t as profitable as they used to be because during times of fair weather (good wind and lots of sun) renewables are crowding out the juice that would ordinarily be produced from those traditional plants.

In his analysis, “Subsidies to Nowhere: A Year-By-Year Estimate of Renewable Energy Subsidy Costs for Texas and for the U.S.” Peacock says that Texas is “being overrun by renewable energy generation.” In 2020 alone, he found that Big Wind and Big Solar collected local, state, and federal subsidies worth about $2.3 billion. Further, he found that since 2018, 79% of all the electricity generation capacity built in the state has been from renewables while only 19% has come from “generation that can be dispatched, and all of that comes from one source, natural gas. The lack of diversity that has resulted from this overreliance on renewables has come at a great cost to Texas.” He continued, “Wall Street bankers and investment firms have partnered up with renewable energy companies from all over the world to chase the billions of dollars available if the companies will pick this form of energy favored by politicians and bureaucrats across the globe—including the state of Texas.”

How costly is the state’s lack of generation diversity? As I reported last week in Forbes, Texas ratepayers are being saddled with about $38 billion in excess costs in the wake of the deadly February winter storms that killed at least 200 Texans. Last month, BuzzFeed News reported that the actual death toll, when including the medically vulnerable who perished due to storm-related disruptions, could be as high as 700. The $38 billion in excess costs will increase the energy burden on low- and middle-income Texans, many of whom were already struggling to pay their utility bills. The bonds being issued to cover some of those excess costs will be paid for with fees tacked onto ratepayers’ bills.

On Wednesday, Peacock told me that wind and solar developers in Texas get “a third of their money from the government. That’s a nice deal. I’d like to get some of that.” He then said the reason the state isn’t building more gas-fired power plants is simple: “Wall Street investors aren’t getting a third of the money they need for those plants from taxpayers.”

The bottom line here is obvious: If Texas is serious about increasing electricity reliability and cutting greenhouse gas emissions, it should be building nuclear plants, which proved to be the most reliable generation during the February freeze. For $66 billion, the state could have added another 6,000 megawatts or more, of new nuclear capacity. Alas, that’s not happening. Instead, about 35,000 megawatts of new wind and solar capacity is slated to be added to the ERCOT grid by 2023. Of that new capacity, about 11,000 megawatts will be new wind projects and 24,000 megawatts will be solar. Thus, over the next three years, the amount of renewable capacity in Texas will nearly double.

But if what’s past is prologue, adding more wind capacity to the Texas grid won’t do much to help meet demand during hot summer days. (See the graphic above). And adding more solar won’t help during extreme cold spells like the one that crippled the state back in February because during the blizzard, solar panels were covered with snow.

Berkshire Hathaway vice chairman Charlie Munger famously said “Show me the incentive and I’ll show you the outcome.” The ERCOT grid shows that tens of billions of dollars in tax incentives have resulted in the addition of tens of thousands of megawatts of generation capacity to the Texas grid that does precious little to provide power during periods of peak electricity demand. That’s a bad outcome.

Robert Bryce is a visiting fellow at the Foundation for Research on Equal Opportunity, the host of the Power Hungry Podcast, the co-producer of the documentary Juice: How Electricity Explains the World, and the author, most recently, of A Question of Power: Electricity and the Wealth of Nations.