How does anyone write this?

How Does Anyone Write this?

Disclosure… I do not read this paper, but people are emailing all the time, this showed up, so I could not pass up a chance to comment on this, with some questions. So some questions come to mind.

Does this person know what the actual global temperature is?

Does this person know where and when the vast majority of the warming is occurring (hint its not where a lot of life is). This is the recent November-March period in 7 warmest years in the satellite record, the bulk of the warming is where it is frigid. Which if the person understood the correlation between. WATER VAPOR AND TEMPERATURE, he would understand co2’s role is limited. even with the warming. Would the author like to see how much he would “burn up” trying to survive in those red areas btw?

Can this person tell us the ideal temperature for the planet, given population and the average persons income is moving upward in tandem made possible by fossil fuels? The author obviously has not read Alex Epstein’s book, The Moral Case for Fossil Fuels, or a whole slew of books (mine included though maybe he has since he is a perfect example of weaponization in a phony war) that debunk his missive and make it embarrassing to even write this. But I guess it will get a lot of clicks given the myopic agenda driven nature of his audience.

How is a burning world greener than it has ever been in the satellite era? 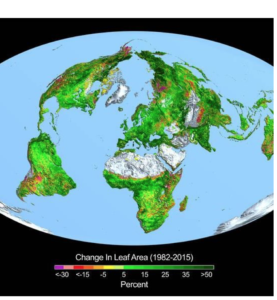 So is this person against a greener planet (an actual green new deal)?

And by the way, how much cooling does the author want? Does he have any idea the repercussions of sudden cooling given the planet and its life have adapted to the very gradual warming that is taking place? We have over 7.5 billion people. Has he considered what would happen if we suddenly quit “burning up”?

And by the way we are not “burning up” and anyone using that term to describe the best time in human history obviously is pushing an agenda that runs counter to the facts.

Given that periods as warm or warmer than today were known as climate optimums due to the positive results on life, how is this somehow a climate emergency?

Would this person consider 59 or 60 degrees burning up?

Can he tell us the perfect level of co2, given plants ( hint we use them for food) grow best and can take stress best at almost 4x the current amount of co2?

How does this person explain the vast over prediction of modeling and the closest one being a Russian Model with no co2 attribution. Believe me this is the tip of the iceberg (yes they still do exist, even in the authors burning world).

And what also exists is another side of the story which either the author has no idea of, or if he does, chooses to purposefully ignore it.

Now what could the possible reason for that?