Why? Increased water vapor raises the base temperature of the planet overall in a distorted manner. Think about it, Suppose you are in the sauna and the dry bulb temperature is about 194 ( which is what our thermostat goes too). Suppose someone comes in and throws water on the unit. The unit maintains the 194 base temperature, but what happens when that water all goes into the air. 3 things. 1) alot of guys clear out. 2) Fools remain. 3) The wet-bulb rises toward the coil temperature. Since there is no incoming cooler air into the sauna as the sauna dries out, what happens to the temperature if the energy is conserved? I’ll tell you what. It rises all the way to 213 which is what I have seen my buddy get it to in there.

Note that he does not bring in co2.

Saturated air warms at the dry adiabat once if comes away from being saturated. Take a parcel of air off the Pacific in winter coming in at a 40 wet bulb and lift it to 10 thousand feet. It may drop off at. 5.5 degrees/thousand feet the first 1000 feet, but then its. 3 degrees. So lets say its 34 at 1000 feet, then take it up another 9k. That’s 27 degrees lower ( 3 DEGREES/1K FEET)  than 34, so at 10k feet it might 7F. now let us take it back down to sea level, As soon as the temp comes away from the DP it starts warming  5.5 degrees/thousand feet. So give it the first 1k and get it to 12. Then add 47.5. ( 9X5.5) So the same air saturated at. 40F on the west coast with no new energy added or subtracted, getting lifted then coming downhill, will find itself at nearly 60 degrees at sea level again. (. at 2k feet in the plains you see how the chinook works only new air masses can mix in and warm it even more

In any case what happens when a La Nina shows up. The global temperature drops right? But that moisture doesn’t magically disappear, something has to be conserved. 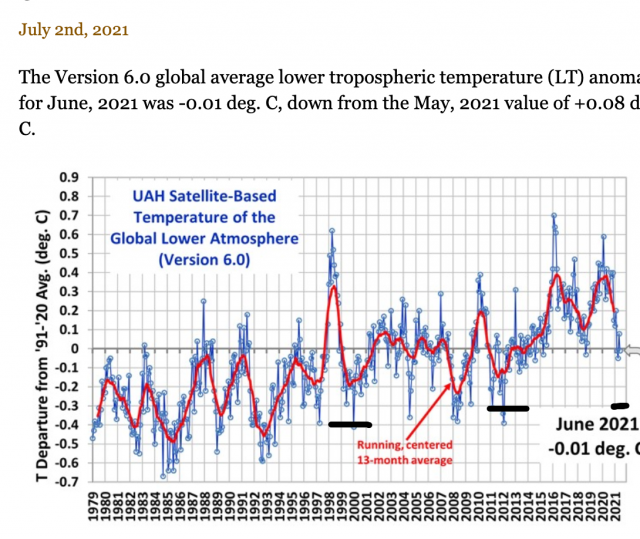 The black lines represent drop-off after major spikes. We finally got a big drop off vs the super nino spike as you can see recently what happens in the 3 years behind the 97-98 super nino and then the strong event of 09-10: 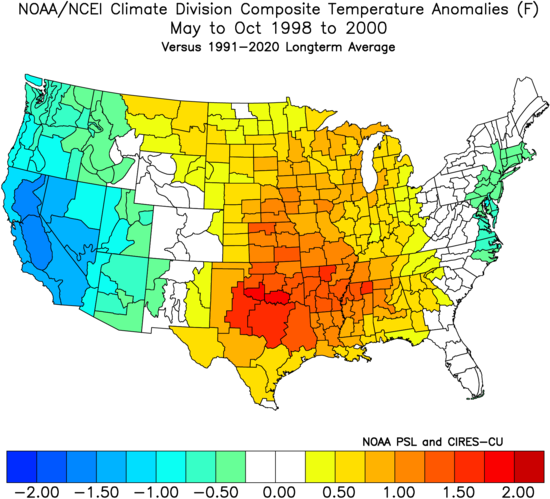 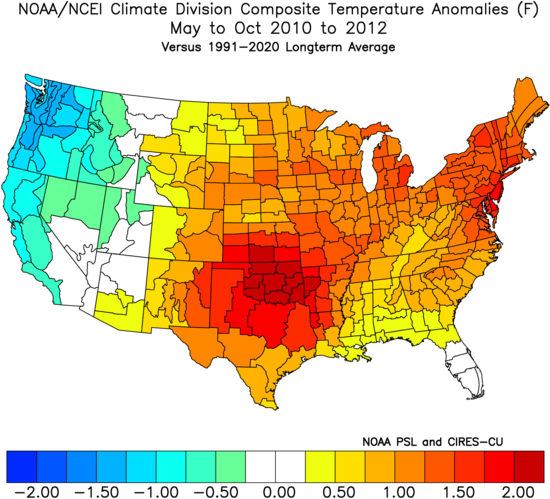 somebody gets hot and dry over the US. A lot of it depends on the pattern going on at the time in other areas, but someone is going to have a stretch of hot dry weather. Why not.. It is downwind from the greatest source of planetary heat, the Pacific ocean.

Now this year so far its been in the west 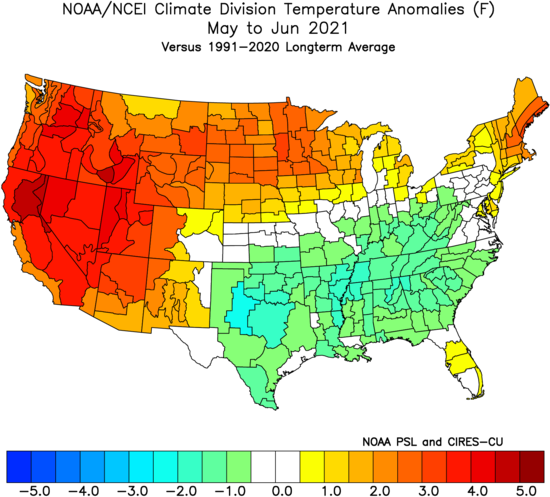 I suspect it IS because both of the la Ninas before had much greater drops in the SST, they were stronger so the effect may be more wide-sweeping leading to the events being further east, The Nina of 98-2000 was quite strong and 10-12 was strong but not as. This current cooldown does not compete with either, but the fact is that the drop due to the extreme warmth of the spikes before was enough to set in motion this idea.

and all the way the planet is cooling but pockets of warmth show up that go wild,

Water vapor is a fun thing to play with, If we really want to quantify the climate we should go to mixing rations or at the very least wet bulb temperatures. Of course, they will explain some things a lot better than just regular temperatures and that has been Dr. John Cahirs argument for what has been decades now. Too bad it is not 1978 when Dr. Cahir was ruling the department at PSU ( we all knew who the real power behind the throne was as far as getting things done)

The heat actually will set up where the spring dryness starts, Another PSU rule of thumb. Drought breeds heat, heat breeds drought and once you march into Summer it is very tough to break a pattern.

Instead, we hear heat domes and climate change and blah blah blah.

But the unmoved mover is always there and the ocean sun relationship is magnificent to watch in this case.. as the sun does its dirty work and beats down and the sudden removal of the extra water vapor input leads to the dry pockets that can develop and feedback, and barring a reversal we may see a similar situation next year

Cooling, sudden cooling, is a bigger headache than what is going on now with the relatively adaptable warming.. Just trying to cool the planet. Warmth is easier for the system to adapt to as there is natural destructive interference from pre-existing conditions and Le Cheteliers is always at work to adapt, But just leveling the input causes problems SO imagine a sustained cutting of it so true cooling starts. And imagine all the adaptive processes that are easy to do when things are gradual and restricted ( obviously when you look at the actual increase in temps vs modeling there has not been the kind of runaway warming that was opined) 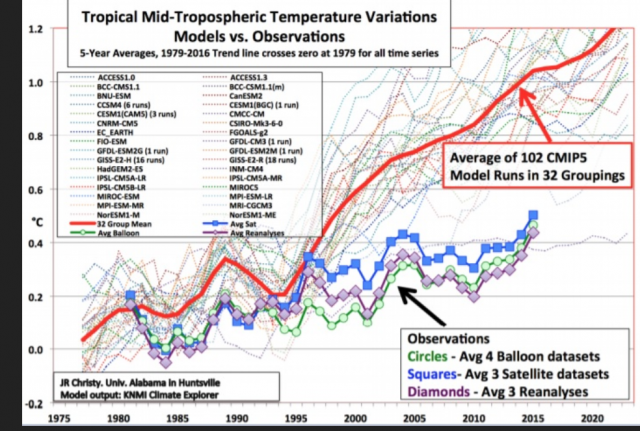 Now, what happens if with all these people and all this great food production there is a sudden downturn?

Here is a classic example of Weaponization In my book I talk about how there were loud cries after the above-mentioned heat of 2010-2012 for a new dust bowl. I never could understand how the clickbait meteo media reporting did not ask, well how did the last one start?  In any case, we all know how bad it is in the west this year, right, Well look at what the last 8 growing seasons have looked like nationally AFTER THAT NEW DUST BOWL WEAPONIZATION FORECAST 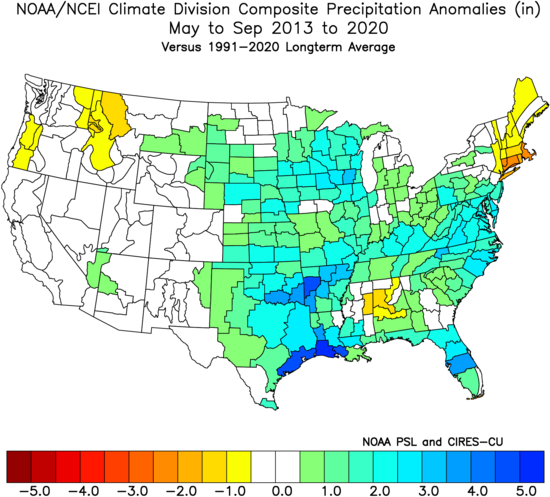 But, notice what goes on with the drought index 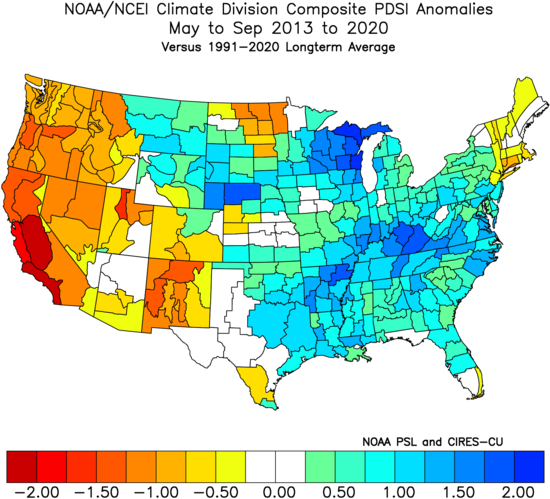 the same period of near-average precip in the west has a drought index thru the roof. Now why would that be?

Demand is a key component in the Drought Index. So what happens if there is much more demand?

But here is the point, in the last 8 years much of the west in the heart of the growing season has been near average with precip. And much of the nation targeted for a dust bowl has been wetter than average. But given the agenda-driven ideas today, such things are not brought up, never mind led off with to maintain some kind of balanced perspective.

Here is a forecast.  The forecaster who hits it will likely go the way of the guy who nailed the 38 hurricanes that no one listened to. Since its likely quite a ways off, It ain’t me babe, but someone out there is going to have an interesting time if he or she sees it coming given the entrenched ideas now.