Prominent skeptical climate scientists, experts, authors, and activists gathered from around the world, to attend the Heartland Institute’s 14th International Conference on Climate Change (ICCC) in Las Vegas, Nevada. CFACT co-sponsored the event, and was proud to have several CFACT experts participate in panels and discussions. A showing of CFACT’s groundbreaking Climate Hustle 2 film also filled a room of conference attendees. The ICCC is the largest annual gathering of those skeptical of a so-called “climate crisis.” Indeed, despite continued challenges to travel from COVID restrictions, many flocked to the conference from across the United States, including international attendees and experts from Canada, Chile, and Germany.

CFACT President Craig Rucker moderated two panels at the conference. One was titled, “‘How to Oppose Woke Capital, Activist Investors, and Financial Regulators’ Efforts to Cancel Traditional Energy.” Rucker gave insight into how he participated in the now infamous shareholder meeting of Exxon Mobil where activist investors successfully ousted three board members to replace them with climate activists. Rucker and the other panel experts explained how this should be a warning bell to people every where; the radical Left is using economic institutions to achieve their dangerous agenda.

“The Left is clever. It used to be that big business and the Left were sworn enemies,” Rucker said. “Now, the Left can’t get enough of big business. Huge corporations are bending over backwards to go as woke as possible, and they’re using regular freedom-loving Americans’ investment money to do it, most of the time against their will or without their knowledge.”

CFACT’s Marc Morano gave a rousing speech addressing, “Degraded Science and the Coming Great Reset.” Morano pulled headlines and quotes from mainstream media outlets that advocate for climate lockdowns ,which mimic COVID lockdowns in the name of, “saving the planet.” Under a climate lockdown, Morano explained, there would be limited air travel, no new clothing, no private property, no meat consumption, and of course, no use of traditional, reliable fossil fuel energy.

“If you’ve loved the last year and a half of living under COVID lockdowns, you’ll LOVE the coming climate lockdowns,” Morano sarcastically quipped. 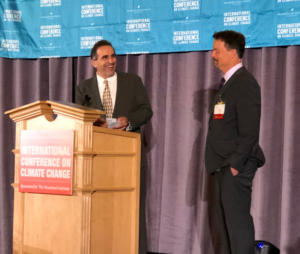 On day two of the conference, CFACT presented its coveted Dauntless Purveyor of Climate Truth Award. The award is given to the climate change expert, spokesperson, or scientist who has done a great deal of work and boldly advocates for the facts behind climate change, despite incredible attacks and opposition from the Left. Previous winners of the award include Lord Cristopher Monckton Third Viscount Monckton of Brenchley, Col. Walter Cunningham, Dr. Fred Singer, and Dr. Jay Lehr.

This year, CFACT gave the Dauntless Purveyor of Climate Truth Award to Marc Morano, for his bold commitment to spreading the truth on the climate issue. The catch was that Marc didn’t know this—even though he was the one opening the card announcing the winner! CFACT surprised Marc with a tribute video outlining his achievements throughout the years that can be watched here. Well over 100 attendees watch CFACT’s Climate Hustle 2: Rise of the Climate Monarchy at the culmination of the conference.

At the culmination of the conference, CFACT’s groundbreaking film, Climate Hustle 2: Rise of the Climate Monarchy, was shown to conference attendees. Well over 100 people packed the showing room to watch the movie—some for the second or third time, but many for the first time.

The film outlines the corruption behind the climate change issue, as well as the money and power involved. Leftist elites, activists, scientists, foundations, and politicians are making trillions off of the issue—all while refusing the same restrictive rules to themselves—but want the common people to follow them.

The film was well received, evoked many laughs as it ridiculed the Left’s hypocrisy on the climate change issue, and was given a loud ovation at its conclusion.

“Well that was a treat!”, said one attendee at the conclusion. Another said “It almost makes you angry—thinking about all of this and what we’re up against.”

“The film was educational and comedic in a great way,” said Priscilla Houser, a conference attendee and CFACT volunteer. “My favorite part was when Vaclav Klaus, the former president of the Czech Republic, presumed his warnings about how we are repeating the descent into communism through environmentalism. It was very alarming.”

Additionally, attendees thronged to get their own copy of the film at CFACT’s table at the conference. It was so popular, CFACT volunteers were sold out of DVD’s! Left: Attendees flock to CFACT’s table to get their copy of Climate Hustle 2. Center: CFACT’s Marc Morano and Craig Rucker with astrophysicist Dr. Willie Soon address the crowd after the movie showing. Right: Marc Morano participates in a contentious interview with Siobhan Kennedy of the United Kingdom’s Channel 4 News.

In addition to CFACT’s efforts at the conference, dozens of experts gave impressive presentations. Climatologist Dr. David Legates discussed his tenure working in government, as well as his climate research. Heartland Institute President James Taylor gave motivating speeches about the climate fight, and encouraged attendees to keep fighting in the face of record censorship and opposition.

Astrophysicist Dr. Willie Soon also gave a notable presentation, explaining the complicated concept of sunspot activity in a way that even lay-people could understand. Anne Jordan, Vice President of the Canada Health Alliance and a nurse in Canada, explained how modern medicine cannot exist without fossil fuels—they help manufacture single-use plastics, pharmaceuticals, and thousands of other products that come from hydrocarbons.

Finally, Dr. Holger Thuss and Wolfgang Muller, leaders of the European Institute for Climate and Energy (EIKE), a German-based climate skeptic group, gave chilling discussions on the state of energy in their home nation of Germany. Thuss and Muller examined the failed government push to force renewables on the country, and how Germans have to now deal with forced blackouts in the cold winter since the grid has become so unstable.

CFACT’s delegation to the conference was interviewed by several media outlets and writers. CFACT’s Rucker was interviewed by the Epoch Times as well as French TV, while Morano gave a contentious interview with a news reporter from the United Kingdom. The United Nations (UN) is going “full steam ahead,” so to speak, with their radical climate agenda, and President Joe Biden continues to push Green New Deal style policies through both legislation and regulation. Despite these challenges, there still exists large opposition from  experts in the science community against these climate alarmist actions in government.

CFACT  will continue to fight the good fight by publishing expert articles and reports from these prominent scientists and authors, and making appearances on television, radio, and internet programs to dispel climate myths. CFACT is also attending the UN’s Conference of the Parties (COP26) in Glasgow, Scotland to expose the radical agenda that will be discussed there, and to act as a fly in the UN’s climate alarmist ointment.

Stay tuned for more updates on these efforts.