This is typical clickbait gibberish.

First of all, how the heck does anyone know what the weather is going to be like in 2050,  Years ago when I was working I was told to quit looking at long-range forecasting as the place I was working was never going to do it—this was in the 1980s.  Well here we are and I see that very place with 90-day forecasts that are trying to pin days down. I guess pinning down a week, a day, or even 6 hours is so easy now that it is not worth it; lets just now write things like this, about 2050 with absolutely no basis in believing you can nail such a thing.

Remember back in 2000 how snow was supposed to be “a thing of the past?”

But if you want to give the Olympics to a repressive regime so they can showcase their country, that’s the business of people who make such determinations.  But when you then try to use that, and make what is nothing but speculation or as I put it, clickbait gibberish, I will stand up and challenge you.

So how warm has China been? Not very warm. In fact, it has been a colder than normal winter in much of the country (since it’s cold and dry anyway where the Olympics are taking place). 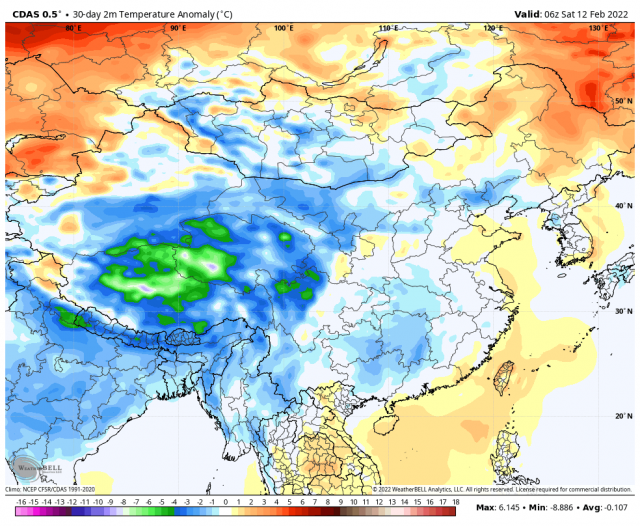 It has been near normal precipitation wise. CHINA IS A DRY CLIMATE IN MOST PLACES IN THE WINTER.  How do people who are trying to make a point here not know this? It is not the Alps., Norway or wherever. When they assigned the Olympics to China, I made a comment that there is likely to be a  snow problem.  The fact is if in 2050 there are 4 places where the Olympics are fine without a worry, its likely those are the same 4 places now. 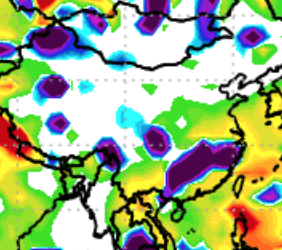 Why are those deviations from dry to wet so sharp in the southeast? Because it is such a dry climate in winter that just a bit above or a bit below average precipitation will lead to that. China is a big country. What a shock it must be that some places are wetter than average, and some drier—must be climate change (sarc).

Now, let’s say you wanted to have the Olympics in Scandinavia.
Even with it warmer than average, there is still plenty of snow with precipitation not that far from average.

Same thing applies in the Alps. Even a  “warm” winter is still going to have snow.  It’s safe now and it will be in 2050.

So why would you try to make any climate link to a place where even if they have a normal winter, it’s still likely to be a problem?
Its so you can push climate change, that’s why.

And how about the Super Bowl? A classic display of head fake nonsense. A spot temperatures on one day breaks a record, right? That is climate change? It’s far more impressive if someone wants to actually write on climate, like how cold the eastern tropical Pacific is—a large area near or below the record cold for the time of the year. 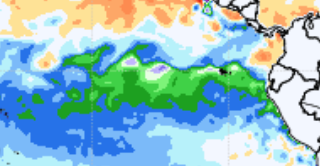 However, I am not saying, ‘aha this is global cooling’. It is part of the back and forth that the planet is a bit warmer, which is known.  But the narrative that this is causing some type of disaster is the opposite of what the facts say.  In 1930 with 25% of the people on the planet, climate and weather-related deaths were over 20 times greater than they are now. In what world is it worse now? We adapt and move onward and upward, not shackle ourselves to some fear-driven agenda designed to limit the upward mobility of the people.

Anyway, there is one day that gets very warm as it does sometimes in the winter in California when there are ridges on the west coast. If we were holding the Super Bowl in let’s say Philly this year, it would have snowed for it.  One of the reasons we have the Super Bowl in the places we do is because we like it warm for the Super Bowl. However, suppose the Superbowl was played in a few days and it is in the 60s. As it is, the US Model has Lax at 79 below the 1973 record warm Super bowl of ’82. Of course, everything is based on the temperature at the Civic Center, so I am sure they will find a way to get it to 90 degrees on the field (I am writing this on Saturday). 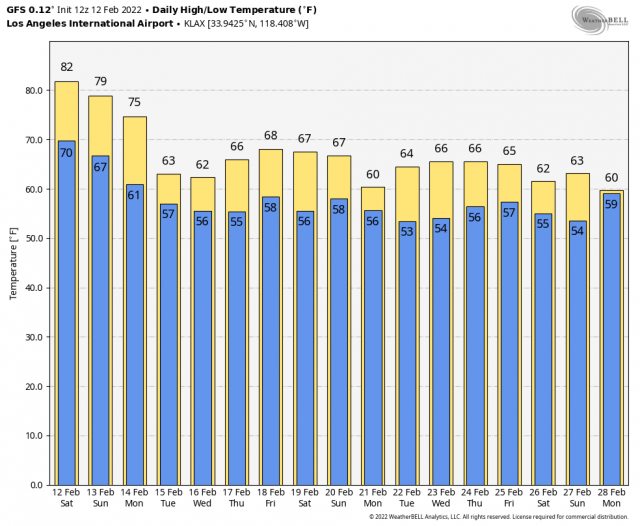 Well, it got to 82 in 1973 in an El Niño year?  That is more mind-boggling for southern California than a la Niña year, that has some warm spikes like this, and that was a strong one, though are usually cool and wet in California.

So if it gets a couple of degrees warmer than it did 50 years ago on a day that a football game happens to be going off, that is a sign that the planet is burning up?

But why is no one bringing up how cold that water is in the tropical Pacific, a far more important area as far as climate and weather implications than a spot record on Super Bowl Sunday?

But this is the world today: China is having a slightly colder than average winter, and overall a near-average winter precipitation wise,  People notice the lack of snow so the weather weaponizers waste no time in projecting what is an average event onto a screen that says a disaster is lurking, and the Superbowl is warm. But, has anyone brought up how cold ENSO 1.2 (El Niño-Southern Oscillation) is?

You can use our website weatherbell.com to go back 40 years and find that in those 40 years, that may the coldest that part of the Pacific which is crucial ENSO area, so much so forecasts on it are done out to 9 months.
Nine months? This is child’s play where you can whip up hysteria about almost 30 years—and no one will call you on the fact that 20 years ago we were hearing the same thing about no snow—except in areas where my Salt clients have made a lot of money again this year because it is snowing.

As COVID wanes, climate hysteria gains. The weather weaponizers are chomping at the bit and behind their masks. I am sure they have sharpened their fangs.