The heat we have seen in Europe has been transient so far this summer, met with reversals to much cooler. Be it France or Scandinavia, relief arrived but now that transient pattern that led to a back and forth appears to be evolving into the mean upper ridge parked over Europe and in tandem with other ridges setting up for the heart of the summer season in other areas of the world. When the jet is at its weakest is when these features lock-in and in summer it means consistent heat where they do.

The 30-day European temp forecast mid-July to mid-August says to me that heat comparable to 2003 is on the table for southern and central Europe, e.g. like in 2003 France could be in the middle of it. 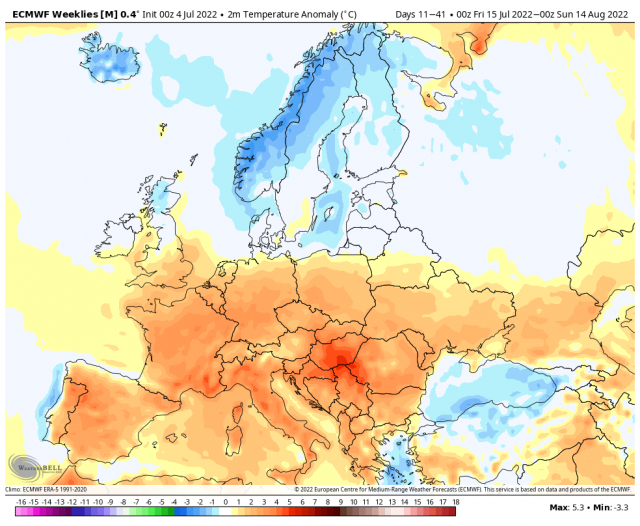 My clients are warned. I have also  been on Twitter, just like before the Texas freeze, trying to get the attention of people that may be able to help plan for this. But in talking to some of the experts in the field on this matter, there  may be little we can do to avoid a situation that could be disastrous on an economic and humanitarian scale.

It would be man-made too, but not via what the left pushes and will of course blame.  It’s the weather doing what the weather will do every 20 years or whenever you get to summer and ridges form and feedback at the height of the summer.  Instead it is the insane policies of the western “democracies” and their obsession with the phony climate war that has put us into this position.

The US abdicating its supply role has led to price surges globally. Do you think it’s bad here? You ain’t seen anything compared to Europe where “Green” energy policies and suppression of competition have put them in a position where power prices are 3-4 times higher than the US. We are near what Europe was paying when Obama’s energy secretary announced he wanted Euro-type gas prices. So that was about 10 years ago and the policies I see being enacted here will send the US toward what is going on in Europe now.  So let us look at what could go wrong here, and while I am speculating on the result, I am not on the weather. In my opinion, steady unrelenting type heat is coming (compounding the problem further down the road would be the early cold winter I am also talking to clients about).

While Europe does not have the kind of air conditioning demand we do, given that most of the time when it’s hot like this the wind dies down, this takes the wind energy off the table to come to the rescue. Putin, with his situation, knows he has them by the throat. Either he comes in and saves the day for people who have stated they want him destroyed, or he does not. Prices rise even further—so much so that people can’t pay them.  The government comes to the rescue, but someone has to pay. So is it the provider who is regulated strongly now, or the governments?  Inflation is running rampant in Europe anyway. What will they do? Print even more money to pay it. You are talking Weimer Republic inflation in the extreme.

I will make the same point I made in the Texas freeze, but given what they are about to do with a report on August 15th that will likely advocate for more of what Europe has been doing that has gotten them there, no one will listen. Instead, the US is mimicking the same policies that in this case could lead to a collapse in Europe. Rhode Island for instance has to be 100% renewable by 2033.  It is laughable if it wasn’t so disastrous. YOU CAN NOT STOP THE WEATHER FROM DOING WHAT THE WEATHER IS GOING TO DO.  You can adapt to it, mitigate it and prepare, but the idea that enacting policies that can limit the very methods that can do that will prevent the weather from doing it. How can I be nice here? This is a recipe for misery.

Let’s go back to 2003. The humanitarian aspect was immense.  That many in essential services in France cherished their vacation more than helping to mitigate the extreme, which did not help. But they did not have the demand they do today. And with failed renewable experiments that have led to hardships that were not needed in these countries, instead of adapting and advancing proven methods, the ante is upped.

If Nuclear power plants were all over Europe, and were the prime source of energy, many problems, even phony ones would be solved.  Instead it is the opposite.

Suppose power prices surge so high there is simply no way to pay for them?  This turns into more than a ripple, it turns into a tidal wave.  Meanwhile sitting to the east is the energy powerhouse—like it or not, Russia—that the West has sought to isolate, demonize and destroy due to their actions, which were initiated in response to the surge in prices that helped them feed their coffers and the dependency on the Russian energy. Just what did you think is going to happen when you shut down the US energy machine while allowing Russia to become even more dominant. I keep hearing these people screaming “Russia, Russia, Russia,” but then they hand them the foundation to do what they are doing.

And like the spoiled child on the playground (or one that is used to getting a trophy for nothing), they turn around and blame everyone else for what they helped cause go wrong.

American LNG exports can help, but what if a hurricane gets into the gulf and stops the flow for a few days (I would be surprised if that does not happen) or worse yet, takes some of the facilities offline for more than that?

The best-case scenario is I am wrong about everything. It is not as hot as I am portraying but I have a lot of confidence in the forecast. But the results I am speculating on are not as bad.  Again the policies that are pushed in this phony climate war are how a man-made disaster can occur. Energy prices in Europe are already sky-high, but they can go even higher. What happens if they can’t be paid? The ripple turns into a tidal wave. I guess if they simply go back to the dark ages with blackouts they may be able to avoid it. But they have set their own table and the REVERSAL of the aggressive US energy policies under Donald Trump has added to all this.

I guess if there is complete collapse and no one uses energy, the energy situation becomes moot.

Of course, the left will blame climate change for the heat, the meltdown, etc. But would that not help accelerate the great reset? And I am not talking about Hillary’s plastic button with the Russians when she was Secretary of State. How did that work out? Would this not accelerate the tearing down of the existing system? With a couple of hurricanes and Europe pushed to the brink, Biden has his climate emergency declaration and overrides the supreme court with their EPA ruling. THEY USE WHAT THEY CREATED, BLAME SOMETHING ELSE, THEN SIMPLY DO AS THEY INTENDED.

Far fetched? We shall see. I pray I am wrong. You should too.