Sulfur dioxide (SO2) emissions have decreased markedly since 1970 and with great benefit to the quality of the air. See the graph below: 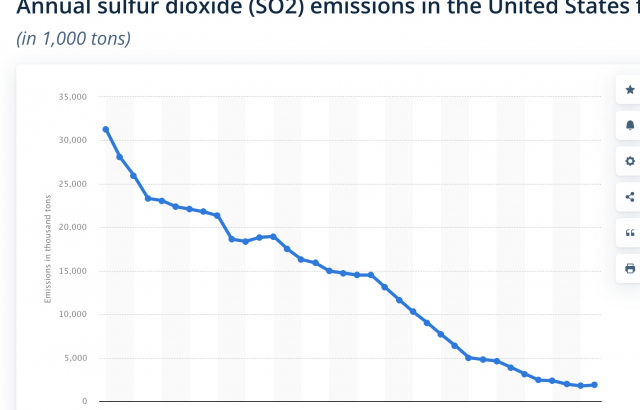 What this means is we are throwing less trash up into the air.  Yes SO2 is trash.  It leads to more smog for one and dims the sun a bit. Humans do not exhale 100x more SO2 than they take in, nor do plants use this to become stronger and put oxygen back in the air. If this were fishing, SO2 is a Trash fish. Its a weed in the garden of clean air.

We have seen the left slam away at the increase in CO2 and temperatures. Let’s review.  CO2 has been increasing in the atmosphere. Temperatures have gone up, but not nearly as much as models said they were. See graph below: 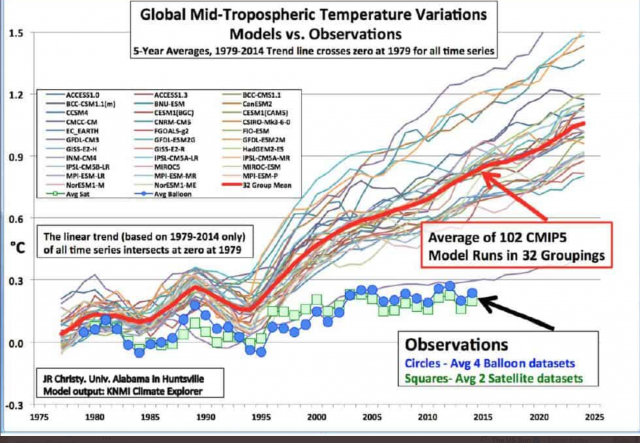 The model that hit what warming there did not incorporate CO2 forcing, is but a minor detail to the left. Besides as I understand it, it was a Russian model so we don’t want any more collusion.

In addition, what was once a climate optimum in the geological record, is now a climate emergency? See graph below:

Since we know there is a direct correlation between Water Vapor and temperatures, its why meteorologists use saturation mixing rations. Saturation mixing ratios and their accurate global quantification is vital to any study of climate. In the table below, you can see how small amounts make such a big difference where its the coldest and driest temperatures: 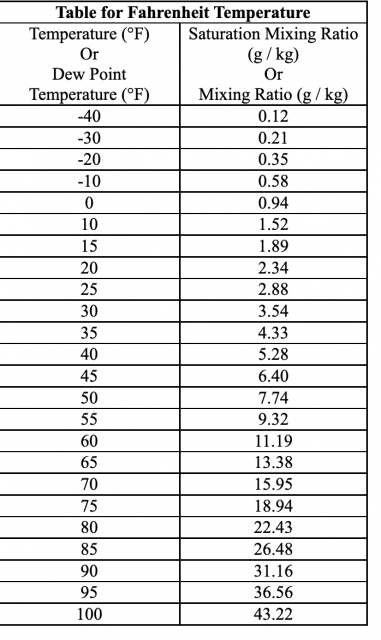 We know water vapor has a lot to do with it. Again CO2 is increasing. Temperatures have increased, more where its cold and dry. Lets for instance, take a look at global temperature anomalies from 1948-1978. It was much colder in the Arctic and Antarctic at that time, which means the lion’s share of the warming is in the coldest areas. So if it was coldest there, then it means it would have had to warmed vs, the 1991-2020 averages which we are using here.

Please notice the warming where most people live is hardly strong enough for the average human to detect over that period. How AOC claims migrants from central America can do it, should be studied, since it would mean they have some genetic predisposition to be able to measure temperature. In the world of AOC, that may indeed be possible. 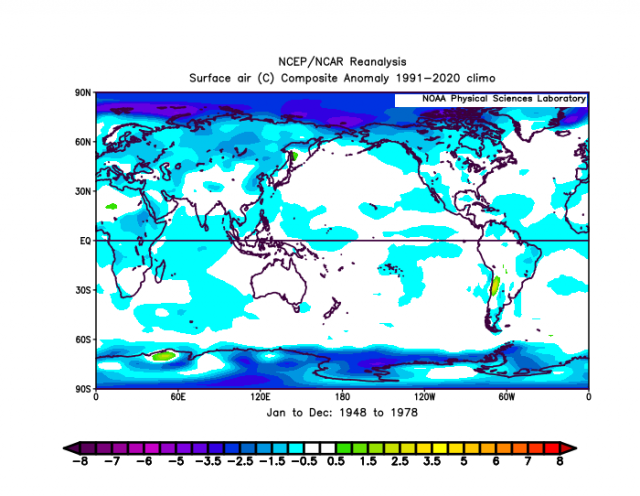 But wait, there is more.

Let’s look at the Arctic winters and Antarctic summers: 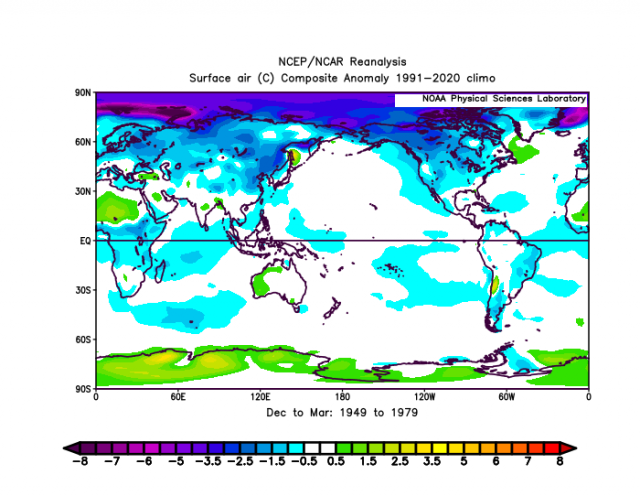 The warming is greater and what do we have we here? Cooling in the antarctic summers. Now how does CO2 do that? Water vapor would if there is a slight increase it would show up in the coldest and driest areas, but have much less of an effect where it is warmer.  Let’s now flip it to the Antarctic winters.

We see they have warmed. Again, because it was so much colder then, it means its warmer now. See below: 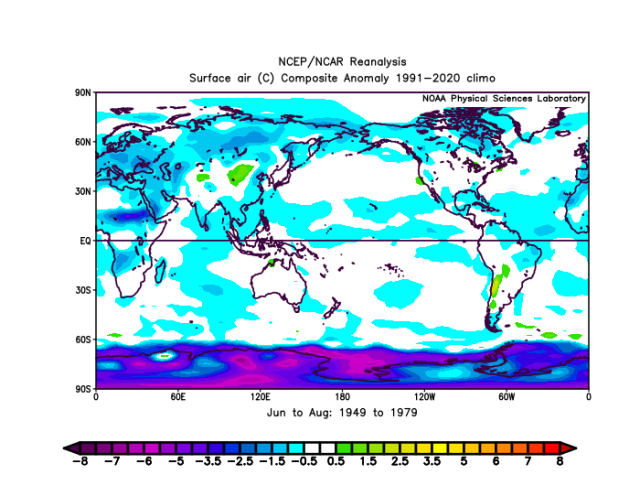 Also, the warming is much less in the arctic. In fact, if we look at actual data since 1958, summers with the red line are certainly not warming: 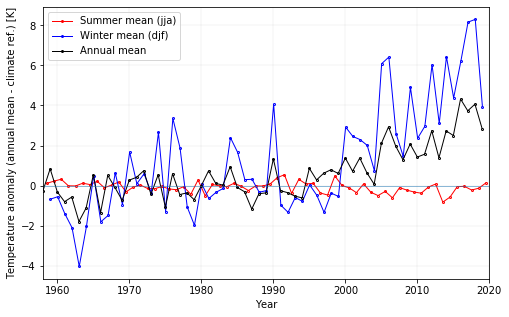 All the warming is when it’s most frigid. For instance look at this year, its has been mainly below averages for the last 4 months: 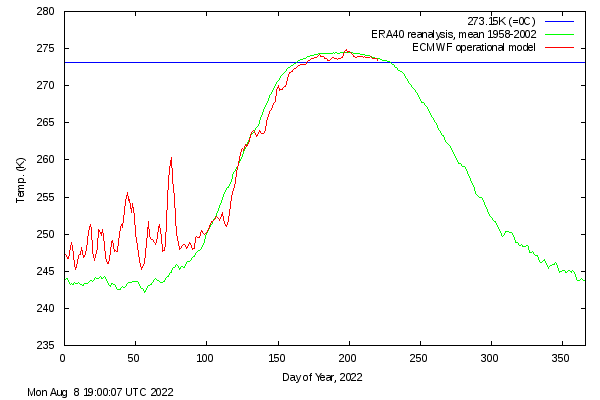 Ever hear anything about the ice cap being gone anymore?  No, and for good reason. Since the Gore/Kerry, et al hysteria, Northern ice has been increasing, so much so it is above the 10-year mean now and way above hysteria levels. See graph below: 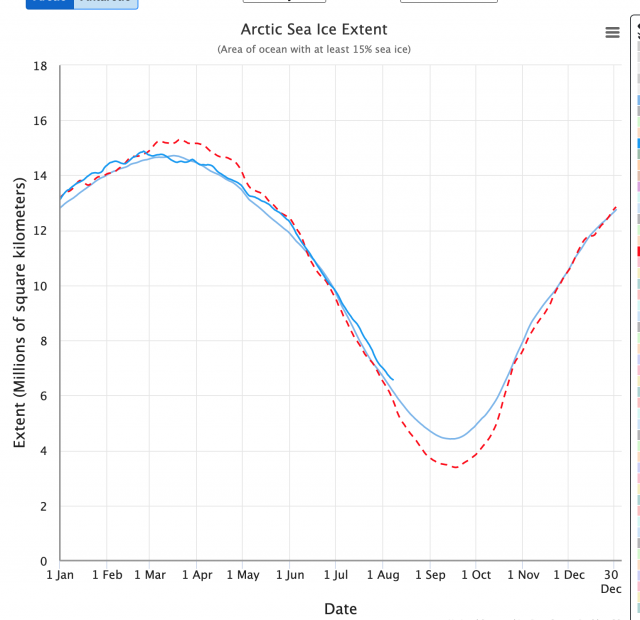 But let us get back to the trash gas, SO2. China, India, and Russia lead the world in SO2 spewing. Waiting for the ultimate climate warrior John Kerry, to quit bullying his own people and stand up to the real polluters. The reason I showed all this is to at least give you a chance to contemplate the fact that correlation is not the same as causation. CO2 levels cannot cause Arctic areas to warm so much in the winter, but not in the summer. We have no CO2/temperature correlations in meteorology. We have a nice theory that has arguable validity as far as attribution, but if things were changing so fast, how come the laws we use in meteorology are not being updated? Because the basic drivers are not. Despite the screaming and yelling about CO2 heat-trapping and changing the density of the greenhouse gas (GHG) blanket, it has to still be negligible. The so-called “back radiation” has to be boxed in by the larger drivers and the question is where the boxing in occurs because chances are by what we are seeing it is reaching its limit which is the rise we have seen over the last 100 years.. Mostly in the coldest driest areas during their coldest driest seasons. THAT IS WATER VAPOR LINKED. Its distorted warming and the lack of quantification of the global saturation mixing ratios  renders temperature a thrice removed climate metric, wet bulbs better, and the aforementioned saturation mixing ratios the best.

But suppose I wanted to play the same game the CAGW side plays with SO2.  You saw how we have cleaned it up right? That means there is a brighter sun. That means the earth can absorb more sunlight. Where would that affect the most? Western summers, right? After all, there are still pollutants, real ones, being spewed into the air (take a ride on the Jersey turnpike sometime). Or look at China.

What has happened to summer temperatures in China since 1948-1978. See image below: 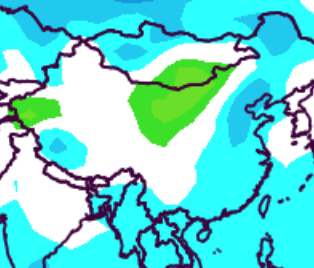 The blue was where it was cooler.  But in the heartland, it was warmer. Increased SO2 may be helping to cool it since they dump it in the air along with India. The eastern part of China is cooler here, but Pacific SST temps were cooler back then and China’s economic explosion in these areas may play a factor. So cooler then remember is against the last 30-year means, meaning its warmer now.

Look at the daily maxes. 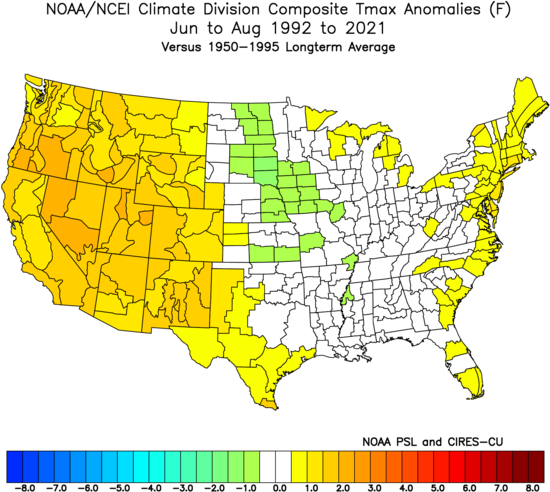 The heating in the west where the air is drier is obvious. It’s been raining more further east and that limits summer max temps. 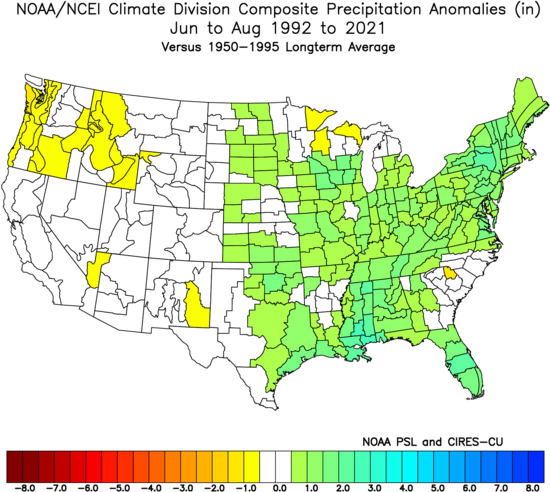 But in the west clearer air due to less SO2 could contribute to the warming. 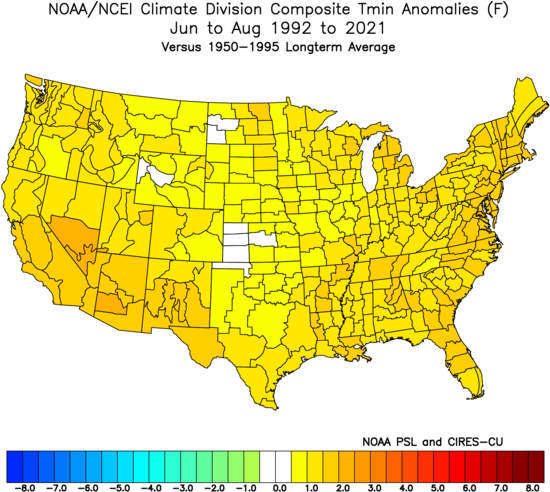 Well isn’t that special? Warming all over the place. But in the west, the drier area, the warming is about the same in the morning noon, and night. Shall we blame that on the reduction of SO2? Further east, what happens when high temps aren’t increasing and low temps are? Well, the mean goes up, but the range lessens. It also means that once above the boundary layer, the warming is not strong enough to offset increased WV and so it rains more. The finger is pointed at WV, but the rain means there is resistance taking place. The fact is, the southwest is still seeing as much rain overall as you can see in the 30-year average.  but population and land usage have skyrocketed.  With SO2 lower, days can get hotter via more direct sunlight and though nights may cool as much as they did, they start from a higher point brought on by cleaner air and brighter sun. But for much of the country, the so-called runaway warming is not that at all, as days are not getting hotter. Put it this way, not that someone over a 30-year period can tell unless they are acclimated to media hysteria and the fact we have air conditioning.

The real feel is such and such emphasizing how miserable you are and how put upon you are and you are the victim of runaway warming. Even if there is no such thing going on.

But should I play the left’s game and start yelling reduced SO2 is causing the west to warm and we have to stop it?  I can correlate the price of  stamps to temperatures (I stole this from Dr Willie Soon). 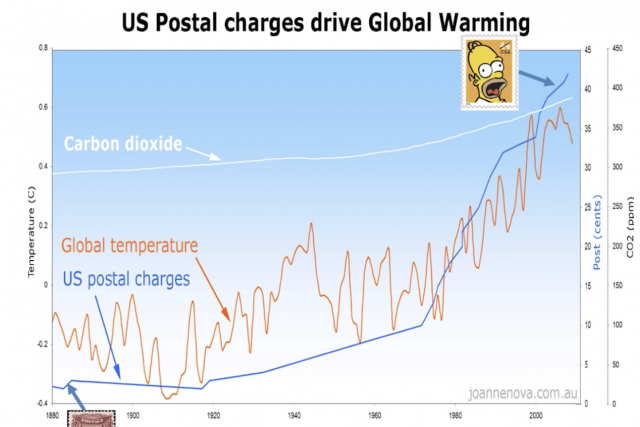 Shut down the post office. They are causing warming.

This means when you look  below the surface at what you see and hear from a meteo misinformation media, the immortal words of Homer Simpson do come to mind: