A possible explanation (excuse) for 2022’s lack of hurricanes

Since my forecast came out on March 7th, that many echoed later, the only thing that has happened is I HAVE BEEN WRONGEST, LONGEST.

And of course, this means my methodology as successful as it has been, has to be questioned. Theories are nice, but if one thing blows them out of the water, then there is a problem. Looking at it, I may have been guilty of not taking what I have been saying about the distorted warming to the extreme. So here is a blog of me, questioning me.

My dad used to say, “If you are right, you have a reason, if you are wrong, you have an excuse.” Right now this is an excuse. But in a recent set of posts on Weatherbell.com, I have been pointing out the extreme warming of the NORTHERN OCEANS. This may be enhancing the distortion of the global weather pattern that I have spoken about so often as a limiting factor to GLOBAL  tropical activity. We certainly have seen no net increase in Global activity despite the warming.  And the biggest climate link if you wish to link tropical cyclones to climate—which the left loves to do when one shows up is the western Pacific which is on pace for its lowest 3 year accumulated cyclone energy (ACE) on record.

What I am disappointed with on a personal level is that I could have caught it by simply taking what I have been saying and taking it to the extreme, because this is an extreme.  The difference in temperatures in the Pacific and Atlantic between 50 north and 20 north is unprecedented. In the Pacific Basin, it’s 3-5℃. Between 50 north and the equator, its an outrageous 7℃ But that would help explain the West Pacific (WPAC) shutdown, despite the very warm water near the coast. 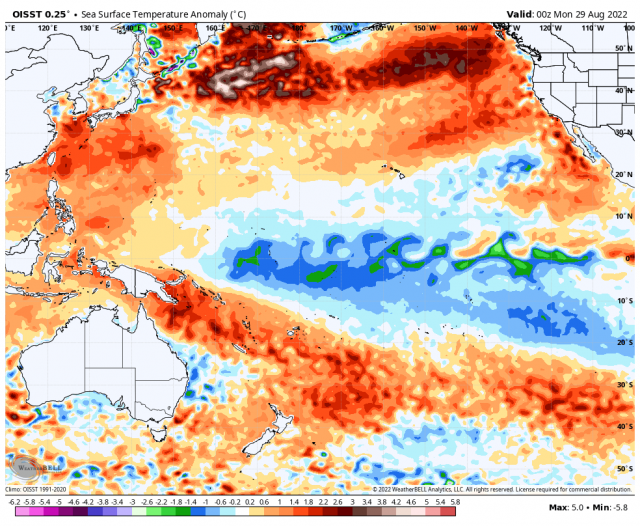 Until now the WPAC has been very quiet. Even with the current super typhoon which developed abnormally far north, it is less than 50% of the average. Given this is the number one area in the world for tropical cyclone production, it’s a very important figure. The Atlantic is even worse—it’s less than 10%. But we see the same warm over cooler structure.

The cool over warm structure south of 30 north is actually positive! But that kind of warmth further north is likely distorting the pattern enough to disrupt the normal tropical cyclones. The total heat is SPREAD OUT. It’s not focusing in the tropical. Look at 2017 versus this year. 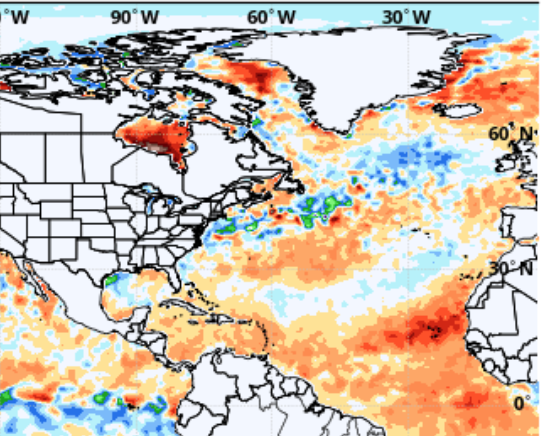 This is hugely disappointing to me on a personal level. It is not the best so far, but the weather teaches humility. But it’s that the very thing I have been pointing out for the demise of long-tracked storms (storms tend to develop in close and are more compact), I did not take into account. I could have used what I have preached, but did not have the intuition to do so. I have told people countless times that I am not as intuitive as my dad was as far as what he always preached, “what is the weather trying to tell you?” Here it was saying the spreading out of the warmth was essentially taking away the reason for tropical cyclones. If their function is redistribution of heat into the temperate regions, and that is already being done, then what is the use?

It has been so strong it actually overwhelmed phase 2 of the Madden Julian Oscillation (MJO) where all the major in close developing hurricanes have occurred in.

But it does not mean the season is over.  Though these severe anomalies may persist once into the fall, there is natural cooling of the actual temperature in the north, and the tropics stay warm. We may still see the frenzy. In fact, the European 30-day precipitation forecast mid-September – mid-October looks almost identical to the years Florida is hit later in the season. See below: 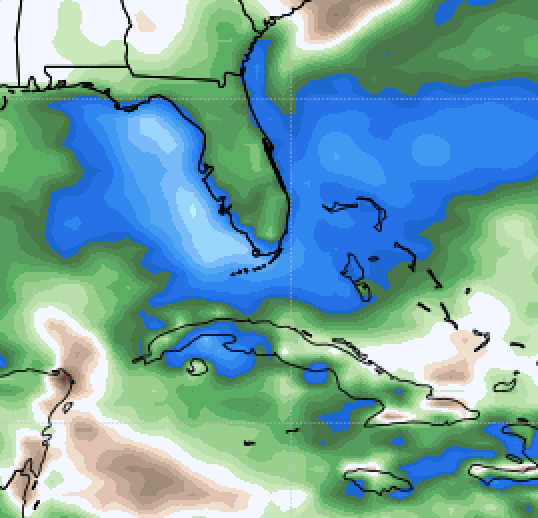 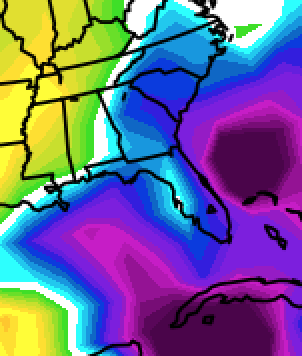 While today (Aug 31 as I’m writing this) is the anniversary of Hurricane Carol in 1954, many storms did not come until later. For the US east coast, years with near average numbers are the years that there have been the biggest storms. The seasonal variation of the same pattern may suddenly set this off. In other words, the temperature anomaly may not change, but because the season changes, you get a different response.

What this also says to me a(nd I have been saying this for almost 2 decades), is the way we are warming—more in colder climates than warmer—is decreasing the zonal potential energy (the gradient is less).  This has to have an effect on every weather/climate metric. Pulling warmth further north has positive effects on man in many cases.

While not over, I feel readers should understand I don’t run from errors. My strength has always been in response to mistakes and so far this has been one. But I am on top of it, not denying it. Hopefully, when the season is done, we get an explanation, not an excuse.

By the way, do you see those years with that kind of October rain in Florida?  Well, the month is warm, in line with our endless summer idea for fall in the US, but what follows is our worry about the fast start to winter. See below: 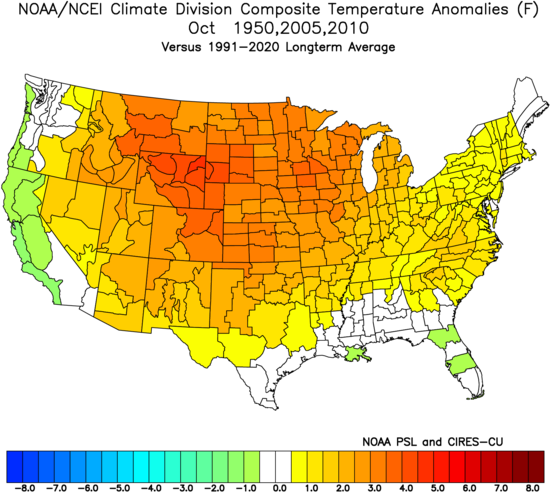