The President falsely attributed a host of natural weather events to climate change and then went on to detail a massive laundry list of wasteful climate spending and destructive regulation.

The President said that:

In the United States, we’re seeing historic drought and wildfires in the West, devastating hurricanes and storms in the East.

Here in Africa — here in Africa, home to many nations considered most vulnerable to climate change, food insecurity [and] hunger follows four years of intense drought in the Horn of Africa.

Meanwhile, the Niger River in West Africa, swollen — swollen because of more intense rainfall, is wreaking havoc on fishing and farming communities.

Seasonal livestock migration routes have been used for hundreds of years are being altered, increasing the risk of conflict between herders and local farming communities.

All of this is natural weather.  Government policy can help people suffering the impacts of extreme weather, but nothing on this list was meaningfully caused by our use of energy.

Floods, droughts, fires, storms, even African “livestock migration” are historically normal and not your fault.

Watch President Biden’s full COP 27 remarks at CFACT.org and read the full transcript and judge for yourself.

In addition to Biden, Friday saw a presentation at COP 27 by the Republican “Climate Caucus,” who many see as “useful idiots” playing into the hands of the climate-Left.

As CFACT’s Adam Houser posted to CFACT.org: “by participating in this ‘Decarbonization Day,’ these Republican lawmakers have legitimized the UN’s message of collectivism, massive taxes and government spending, corrupt and alarmist science, and centralized power. In their attempt to be part of the conversation, they have only eroded the conservative message.”

President Biden’s climate and energy agenda is based on unsound science, would lead to massive erosion of national sovereignty, individual liberty, and prosperity that will weaken the free world and empower its adversaries.

Yet what lies in store for those of us with the courage to marshal the facts and correct the record on climate? 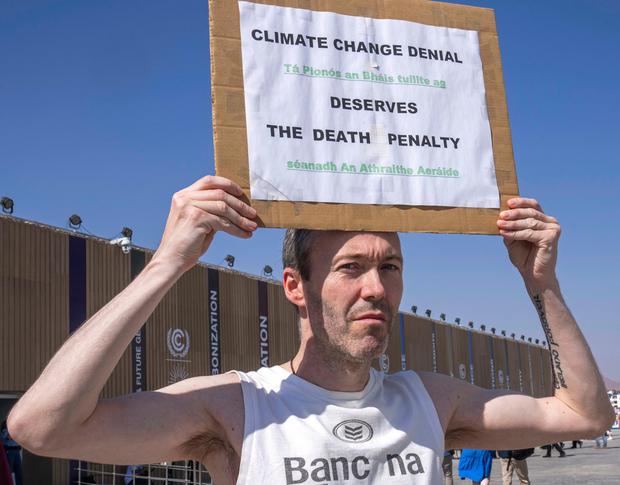 Take a look at this photo Marc Morano posted of a climate radical calling for the “death penalty” for “climate deniers” to CFACT’s Climate Depot.

If world leaders go on shamelessly egging them on, could climate radicals go from attacking great works of art to attacking people?

Joe Biden and John Kerry are pushing bad science at the UN climate conference in Egypt as justification for terrible climate and energy policies.  Thank you to our fantastic friends and supporters for making it possible for CFACT to expose their false narratives and push back with solid facts.  We cannot do it without you.  Please make the strongest contribution you can right now.