South Australia survived the big scary sunny day yesterday, but had to shut off solar power and throw all those sacred green electrons into a thousand open circuits.

Yet again, another spooky voltage spike appeared, suddenly leaping from 245 to 257 volts in less than three minutes and shaking down any impertinent solar panels. That was at 10am. From then on, despite the growing sunlight, the combined solar output of South Australia stayed flat at around 1.2GW. Compare this to last week — before the safety cord to Victoria broke — then, solar generation was peaking at 2.1 GW. So the great renewable wonderland is managing to keep the lights on, but nearly a billion watts of solar power is sitting uselessly on rooftops and in fields every sunny day at lunch time.

This is not the cheap and efficient golden path to the future, but the Bolshevik elephant that eats your retirement plans. Despite the oversupply of unreliable generation, yesterday the state was using fossil fuels to supply between 20% and 80% of their electricity.

Mark Jessop recorded the voltage and commented: “Lovely sunny day here in islanded SA, which of course means  @SAPowerNetworks has bumped up the voltage again.“

The question-of-the-day is whether South Australia Power Network (SAPN) is deliberately using voltage spikes to trip off household solar panel inverters, thus stopping the world-saving-photovoltaics from flooding the grid with electricity the system can’t handle. It would be a brutal and rather desperate cowboy tool for grid management. Shame about the surge hitting all those other appliances, eh? But it’s just a little sacrifice on the road to perfect weather.

The voltage spike could be due to many solar panels suddenly ramping up production, like, say, a cloud bank lifted off Adelaide at 9.51?

For the next four hours after the spike, as the sunlight peaked for the day, the solar production stayed flat seemingly “capped” at 1.2GW. Uncanny how the grid solar farms (red) maintained a constant output… 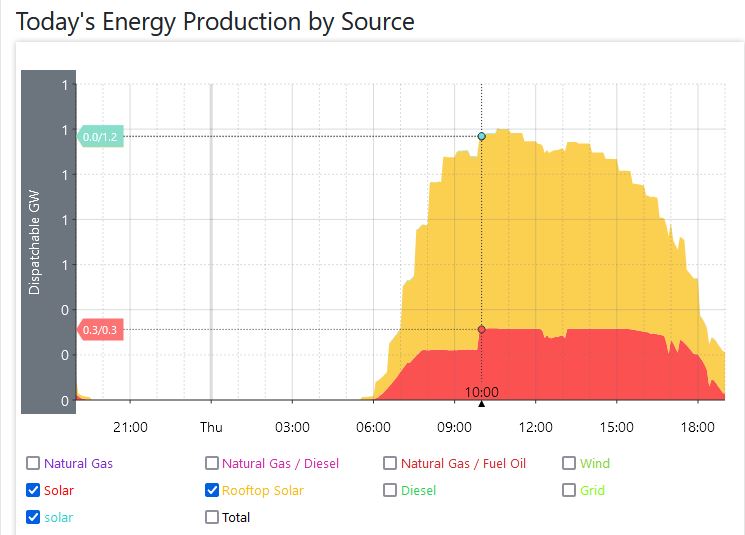 Two years ago, the SA Government knew they were headed for the deep belly of the Duck Curve, where solar midday over-supply threatens grid stability. Rather than stopping people adding more solar panels, the government decided all new solar systems had be able to be remotely disconnected. Naturally this situation, where the owners brain is superseded by a bureaucrat managing a duck was called the Smarter Homes Regulation.

But all the panels installed before Sept 2020 can’t be turned off by the government, and were thus rogue operators that possibly needed to be shaken out with voltage shocks.

The big test of South Australia’s “renewable grid” yesterday is like a road test of our renewable future. It showed that without the help of the other states to keep the frequency stable, the massive solar influx at midday is largely unmanageable unless the Minister of Electricity controls your solar panels, and everyone is happy to pay for hi-tech equipment that sits around neutered on a sunny day.

The Australian grid is permanently “Islanded” by virtue of being an island. There is no one to rescue us.

In theory, it would take $90 billion dollars worth of batteries to stabilize the South Australian grid, and that’s only 6% of the national one, so we’re doing a trillion dollar experiment here with no life raft.

Three more days to go! The big interconnector to the rest of the network will not be fixed now until Sunday evening.