Cash, Trump denial and Fiji at the climate conference

The UN climate talks in Marrakesh, Morocco, finished with demands for more climate cash, which the bureaucrats call accelerated or enhanced commitments, and pleas for incoming President Donald Trump to keep the U.S. within the UN climate regime and send over the cash.

The Paris Agreement calls for developed nations to transfer $100 billion per year to the UN for climate redistribution and funding.  The delegates to COP22 claim this is not enough, but are fearful the Trump Administration will send only token payments or nothing.

A group of European nations sought to calm the fears of developing nations by together sending an additional $80 million to the UN adaptation fund.

Back in the U.S., Gavin Schmidt, who heads NASA’s Goddard Institute for Space Studies, threatened to resign unless President Trump in effect gives him a free hand to keep using the GISS as a center for climate propaganda.  In 2012 the work of James Hansen to move NASA away from hard space science and into global warming campaigning prompted a group of American astronauts and ground crews to send a letter to NASA asking the agency to knock it off.  Schmidt is Hansen’s heir.  What would happen to the climate campaign if NASA stops adjusting its data to fit the warming narrative?

Ordinarily the host nation presides over the COP. Next year will be a little different.  COP23 is scheduled to be held in Bonn, Germany, but presided over by the island nation of Fiji.  The idea is to cast science and rational policy aside and replace them with an emotional appeal in the name of island nations allegedly sinking beneath rising seas.  This is fraught with problems, mainly that sea level rise has not accelerated from pre-industrial times, but continues to rise at merely one to three millimeters per year, the width of a paper clip or less.  Natural, miniscule changes in sea level are not something that will sink island nations where new seaside resorts are being built at a rapid pace. 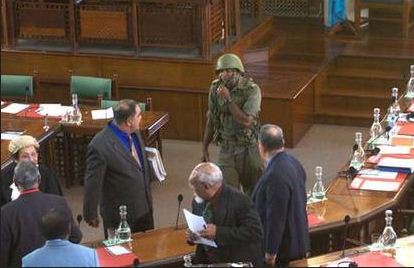 seized control of Fiji in a military coup.  With a decade having gone by, presiding over the UN climate talks could be just the thing to help legitimize the island autocrat.

While climate politics may be unable to meaningfully alter the thermostat of the Earth, it retains its ability to greenwash away your sins.  Has the UN completely abandoned its founding human rights mission?

As COP22 ends, all eyes are on incoming President Trump.  Will he pull the U.S. out of the UN climate agreement?  Will he keep it in place, but minimize the pain for the U.S. under it?  Will the UN and outgoing Obama Administration be able to convert President Trump into a globalist?

We shouldn’t need to wait long to get the answers.

President Trump’s victory depended on Midwest workers anxious to bring industry back to their communities.  This will require abundant, affordable energy.  It does not seem likely President Trump will subordinate the interests of American workers to the UN climate agenda.