A record-low 759 tornadoes formed in the U.S. so far this year, according to the National Oceanic and Atmospheric Administration’s Storm Prediction Center (SPC).

Through Oct. 3 of this year, SPC recorded two fewer tornadoes than the

previous record-low of 761. Tornado activity has been unusually low in recent years, according to SPC data, which goes back 65 years.

“This lack of tornadic storms in recent years should also correlate with lesser severe thunderstorm activity in general in the U.S., since the conditions which produce large hail and damaging winds are generally the same as are required for tornadoes,” Dr. Roy Spencer of the University of Alabama-Huntsville wrote on his blog. 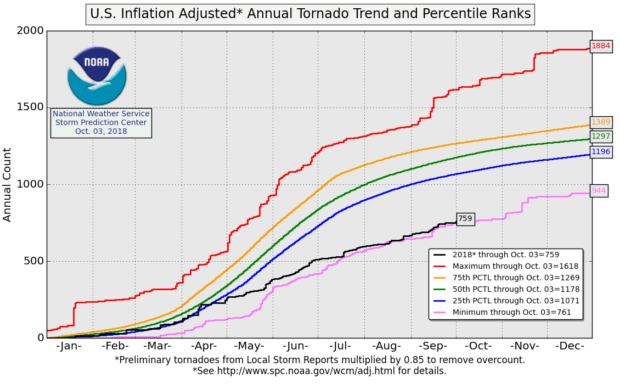 Meteorologist Steve Bowen noted on Wednesday there’s been 1,961 consecutive days without an F5 tornado in the U.S., based on the Fujita tornado intensity scale. Bowen tweeted this is the second-longest streak without F5 tornadoes since 1950.

Today marks the 1,961st consecutive day without an F5/EF5 tornado in the United States. Currently ranks as the second-longest streak since 1950. pic.twitter.com/hqjpKz6k17

An F5 is the most extreme category of tornado, bringing wind speeds as high as 318 miles per hour. An EF5 tornado, based on the Enhanced Fujita scale, can do “incredible” damage to areas it hits. The EF scale was created to estimate wind intensity based on the damage a tornado causes.