Hurricanes have always been bad — why aren’t they worse?

With hurricane season upon us, it is predictable that almost all storms which threaten the U.S. will be attributed to global warming. The next two hurricane seasons, given the political climate, will likely  mean some cat 5 bloviating no matter what the case. As I like to do, I have decided to explain why something may happen, beforehand, and why it’s perfectly natural.

I took 3 areas and some selected sites to review some notable storms, what happened, and why something worse could happen.

I strongly advise you to arm yourself with hurricane history to resist the onslaught of hysteria in store.

Here is the northeast map with examples for southern New England, around NYC, then south down the coast: 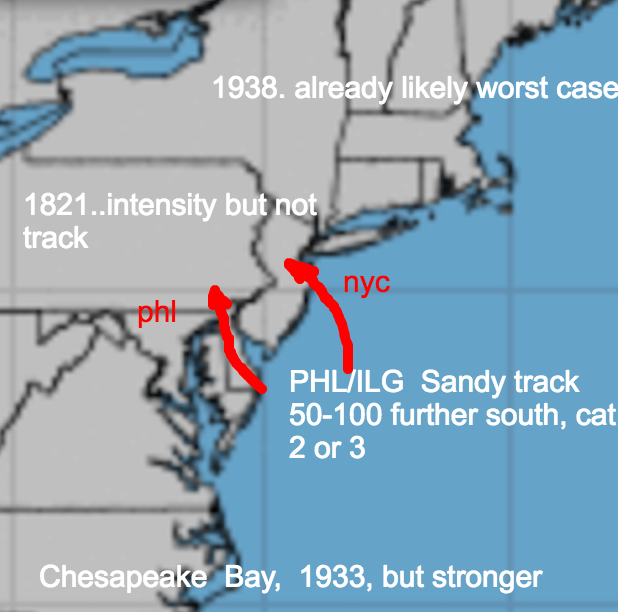 The 1938 hurricane is one of the greatest extremes that far north I can imagine.  Its intensity approaches the high limit for a hurricane in that area.  If one clocked in a bit stronger, perhaps a cat 4, that would be within natural variation given we have seen something like this before. 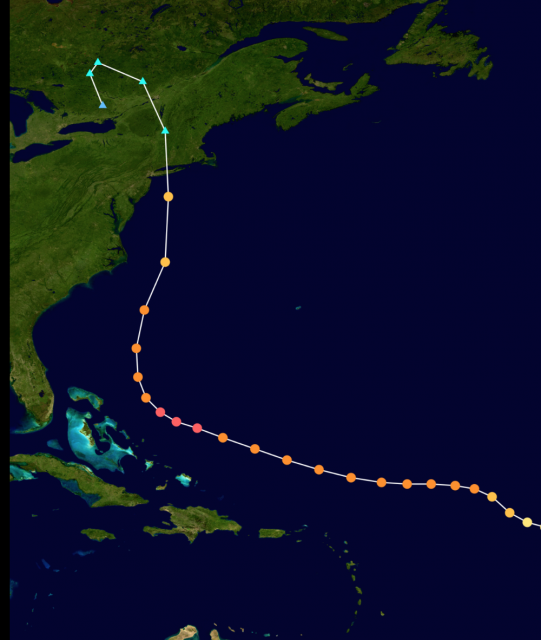 Not mentioned here, but potentially even worse, would be the Carol/Edna tandem of 1954. Two majors in 11 days, yet Edna veered over Cape Cod and spared areas further west that were still devastated from Carol. Two major hurricanes in 11 days on the New England coast is far worse than anything we have seen since, and 1954 was also the year of Hazel, meaning three majors in one season on the east coast.

1821 had the intensity, but not the prime track for NYC. A storm of that intensity hooking NW with a landfall south of the city would be the worst case ( red in map above). 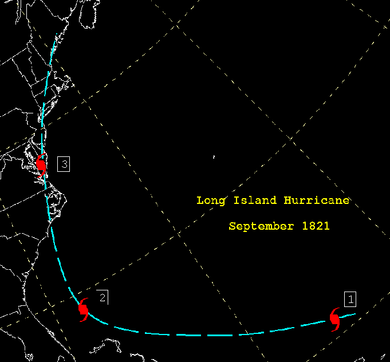 I drew  a second red  track needed for the worst case for Philadelphia, Wilmington , and the south Jersey shore. The track would be, south of Sandy’s track. There is no reason why a storm cannot be a cat 3 or 4 doing that, ( as strong as 1821 but again coming from the SE as its caught in a trough to its southwest If you can get an 1821 that strong with a track over or near land then a storm coming from the ocean can be also).

For Chesapeake bay including tidewater, and up to DC/BWI, the 1933 track was nearly worst case. A stronger version of that can certainly occur and is well within the realm of nature. 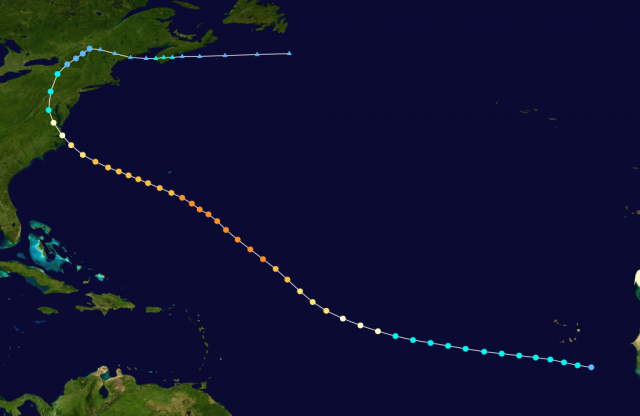 A word here on what may be the greatest display of total hurricane prowess. Donna, which hit SW Fla in 1960, was larger and stronger than Charley and Irma.  It brought hurricane force winds to every state on the east coast, a fete never recorded before, nor since.

Donna was a 4 in FLA, a 3 in the Carolinas, then a 2 in New England.  Unlike Irma and Charley, Donna walloped a much larger area. 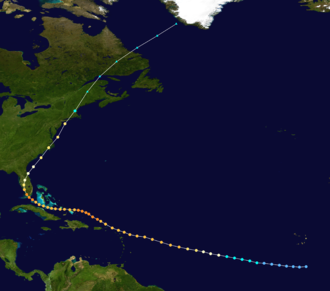 Lets move to the southeast: 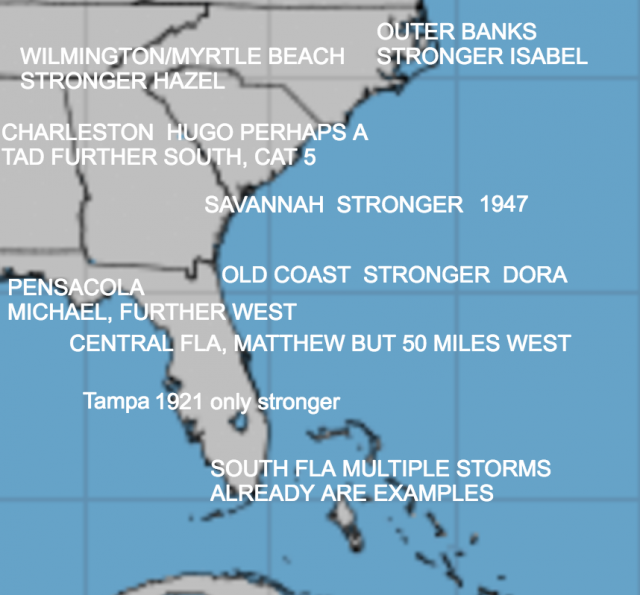 In the southeast, Isabel in 2003, stronger would be the worst case for the Outer Banks: 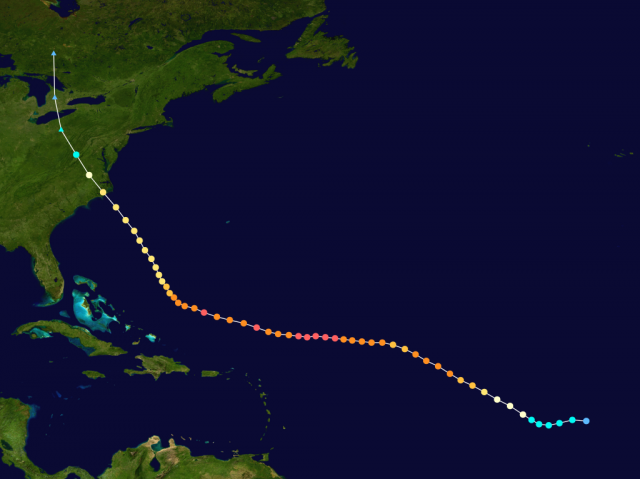 We have been fortunate that storms like this, and more recently Florence, have weakened as they reached the the coast. Obviously, the hurricanes of 1938 and 1821, did not. Certain patterns are more favored for in close intensity, as we saw with Michael last year. They have been the exception rather than the rule.

Myrtle Beach to Wilmington saw the Cat 4 Hazel in 1954:

Hazel came in October. In September, a similar track could easily have reached cat 5. Again the storm we have seen, plus intensities we have seen, argue that any given storm could have a higher intensity,

Hugo, a bit further southwest, with its hit near Charleston, and a bit stronger, would be the low country’s worst case, going in SW of Charleston: 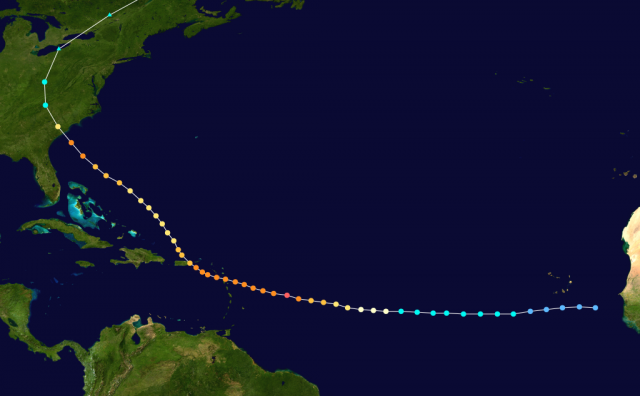 Savannah, a stronger 1947 hit from the east, would be a worst case. It is tough to hit the coast from the east from Savannah to St Augustine:

Further south, its 1964’s Dora. The storm stalled and weakened before coming in.  Had it kept coming, or should some future hurricane do so, it would be as bad as it gets:

It is very hard to drive a hurricane ashore in central Florida, as frictional effects try to keep the storm offshore. Matthew would have been a giant bulldozer on Florida’s central Atlantic coast, had its track been 50 miles further west: 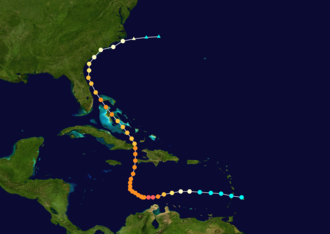 In deep south Florida, past major hurricane are too numerous to name.  Ever wonder about the old joke, “if you believe that, I have some land to sell you in Florida?”  You can see why.   Why people build on the beach, then blame co2 for what inevitably happens, is beyond me.  What is more amazing is that other people buy in.  The last major hurricane to hit from the east was Andrew in 1992. Wilma came from the southwest in 2005. I can name storm after storm.  To understand how bad things can get in deep south Florida, look at the tracks of the major hurricanes that hit the area in the 1940s!

The absurdity of believing the time we are in now to be the worst, does not stand up when put in the historical perspective.

The 1921 Tampa hurricane, the only major hit recorded there ( it’s very hard to hit the Florida coast between Tampa and Apalachicola), is another track where had it ramped up a bit in intensity coming to the coast like Michael, could have been a worst case: 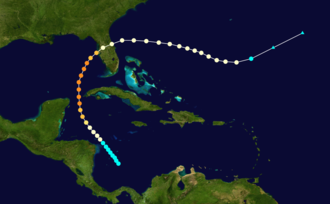 For Pensacola, a Michael further west is certainly in the realm of possibility, and for Mobile Alabama too, or a Katrina or Camille further west.

Which brings us to New Orleans.

Katrina was not a worst case. That would be a more intense version of the 1947 hurricane track which was Ft Lauderdale’s worst 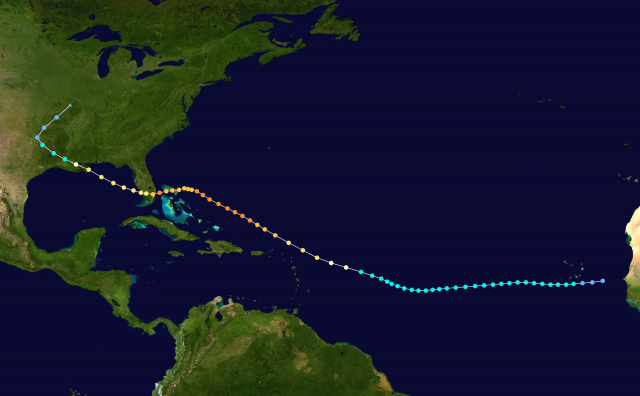 It was not nearly as strong when it hit New Orleans, but that track, with the intensity of a Camille or Katrina, would cause greater devastation to New Orleans than Katrina. The angle of attack and intensity is crucial.  The 20-25 surge would come back into Lake Pontchartrain and then into the city, as opposed to only 9-13 feet with Katrina, and the storm moving away rather than over the city. Betsy in 1965, caused severe damage, but did not hit north of the mouth of the Mississippi as the 1947 hurricane did.

Quite frankly, New Orleans is as bad as it gets, when I add in other factors.

Further west lets take a look at the map: 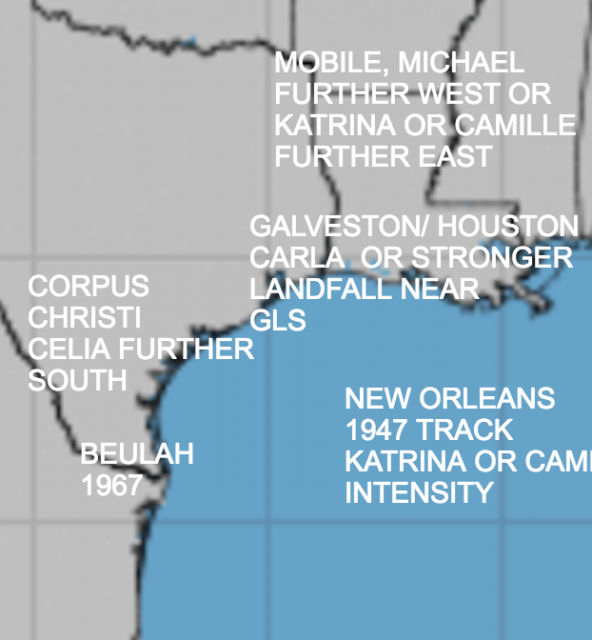 For Galveston and Houston together, a storm as big and strong as Carla, which gave hurricane-force winds to all the Texas coast but hit further down, would outdo 1900 in Houston and be comparable in Galveston: 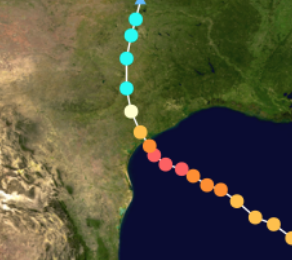 Superimpose this track up the coast, with the storm moving NW then NNW over Galveston and then near or over Galveston bay, and that could be the worst case. Harvey stalled, of course, due to a cold trough.  One can one imagine want a monster like this stalling near or just west of Houston will do. The stalling of Harvey by a  cold trough was in part responsible for the extended period of heavy rain around the Houston area, but in terms of size, Harvey cannot hold a candle to Carla which had wind gusts to 170 mph where it made landfall.

People need to understand how bad it can get. The town of Indianola Texas was the number one port on the gulf coast until two hurricanes devastated it in very short periods of time. The first one hit in 1875 and they tried to rebuild then the second hit in 1886.  Then they gave up.

You can read about it here.

Further south, Celia in 1970 went in just north of Corpus Christi and had deepened from a Cat 1 to a 945 MB cat 3 in the last 18 hours, Highest wind gusts reached 161 mph at Aransas Pass: 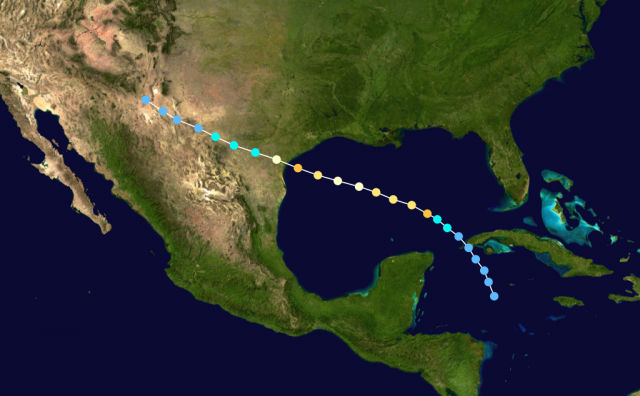 For the Lower Rio Grande Valley, the prime example of how bad it can get is Beulah in 1967, but she weakened to a cat 3. The same track maintaining intensity would have been even more devastating: 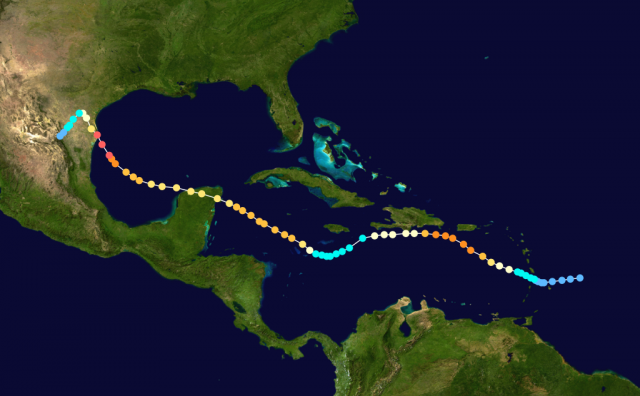 The point of this is to prepare for hurricane season, with perspective on how bad it has been, but also how bad it can be. While there are limits to what any one system can do, nature has produced storms that came in stronger and more frequently in the 30s,40s, and 50s than we have since. There is nothing that says a storm cannot move a certain path with even stronger intensity, simply based on what has happened before. Attribution to man-made causes, which is going to be ramped up even more as we approach 2020, should be viewed very skeptically. Above all, if you really want to understand what these storms have done, go back and read about them,
Some men look at things and ask why, when I see what nature does with hurricane, I ask why not, and why can’t it be worse?