I never judge a person by their weakest day. The totality of the journey is what matters most to me. Unfortunately, in today’s world,  no one cares to see what got the person to where he is, but just whatever appears last.

I am saying this because I have publicly disagreed with President Trump on his ideas that computer models from Aug 28 were forecasting a hit in Alabama. I have no idea who briefs him, but in the world of modeling: garbage in, garbage out.

Storms in their embryonic stages are particularly hard, because modeling can’t get a handle on exactly what the storm will do until it matures.  Our company said loudly that when it turned west it would intensify rapidly and told our Bahamas clients this would be the worst storm to ever hit Abaco and Grand Bahama, while Nassau would escape.

The day before the tweet this was our forecast; and keep in mind that was 3 days after the model runs in question: 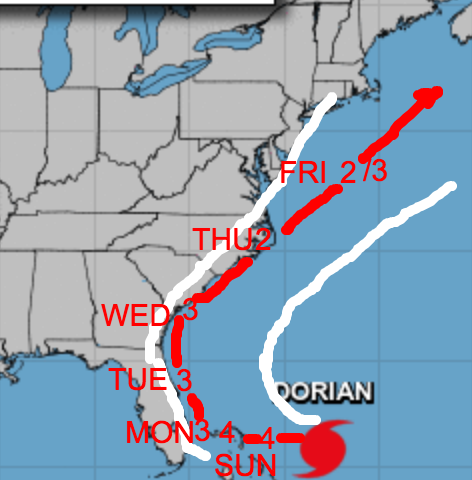 The president, while using maps from Aug  28 (when the day of the tweet the storm was obviously not coming to Alabama) is a position I cannot defend.   In fact, if you even go by what he was looking at, how was that storm going to get to Alabama without being much weakened?

Whomever is advising the President should know that. 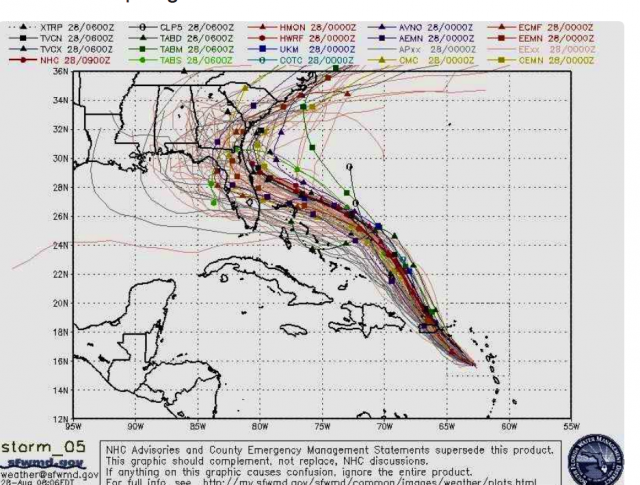 Even getting back over the water, it would be out there for a short time and its very difficult for storms to reorganize that fast and regain their previous power. With the spread of the models of 1000 miles, the core of them were to the east. This would mean that while Florida would have problems, this would be a much weaker event in Alabama even if it did go back there.

Again, by the time the tweet came out, this same product was already united well to the east. And besides, this is modeling: It seems strange to quote this model, yet at the same time trash climate models. Anyone working in the field knows how wrong both can be. No one owns the future when it comes to nature.

But also the fine print on the bottom of this says it all:

President Trump used to wrestle. And as a wrestler, he is tough and stubborn and wants to win every scramble.  I know that.  But sometimes you have to say “so what?”
A guy scored a point, so change positions so that you can get a bigger advantage. I know he doesn’t like to get “scored” upon, and I admire that, but if you give a point to get into position to pin your opponent, isn’t that better?

Here is the real shame in all this: the media, of course, is obsessed with any mistake he makes and has covered up all the good that is going on. President Trump, however, should know that. And this is a HUGE example of holding a position too long – it detracts from the bigger picture of the ignorance and arrogance on display in the 7-hour climate crisis event.

First of all, there is no climate crisis. Life has never been better on planet earth, but I am not going to get into all that. The president, by obsessing over this, missed the opportunity to absolutely destroy the Left’s position by using their own words against them. The economic suicide pact they advocate in various forms looks like a delusional exercise in narcissism; to believe you can control the atmosphere.  But then again you would have to forecast the weather every day globally to understand how big this all is.

Let us remember that President Obama’s own EPA said their draconian measures would only save .01 degrees Celsius over 30 years, but as Gina McCarthy, former EPA director said in testimony before the Senate when asked about their plan only saving .01C:

“[W]e see it as having enormous benefit in showing sort of domestic leadership as well as garnering support around the country for the agreement we reached in Paris.”

She would not answer the question.

So it is feelings over facts. Form over substance. We are going to show the world how to behave, by committing economic (and where do you think your freedoms are going to go) suicide.

So, in essence, the hysterics on display at the climate Crisis town hall are feelings over facts to save .01 degrees Celsius at the expense of our economic lifeline.

So instead of defending his Alabama position, the right move going forward is to hit them with their own hammer. You want to crash the economy over .01C?  That can’t even be measured reliably as even now, different devices come up with different answers.

So that is where he should be focused, letting the public know that no matter how you feel about the cause of the current warming cycle of the planet, the plans being advocated do nothing.  Just what are they against? The Earth greener than ever in the satellite era?  More food grown than ever,  personal GDP and life expectancy skyrocketing, climate-related deaths plummeting.

Yet you have 10 candidates that represent 1 of the 2 major parties advocating for the economic downfall of the country with their plans.

These subjects are where you score your points; not by defending a position that even many of your supporters have a problem with.

If the president needs a source to give him an “in” on the weather, I would always respond to the call of my President. He wrestled, so did I.  Smarter paired with tough is better and it is all about preparation and being ready at the time.

He knows that I am hopeful his mistake will not be made again. That town hall opened a world of opportunity,  however, and that is where your offense should be.