Since the 1800s, the US has warmed slightly.   The headline on the Washington Post, seen here, deserves questioning:

“2°C BEYOND THE LIMIT: Extreme climate change has arrived in America.”

Of course, they made sure this comes out in a record-breaking heatwave (not 10 days from now when much of the nation is below normal)

Lets take a look at this map 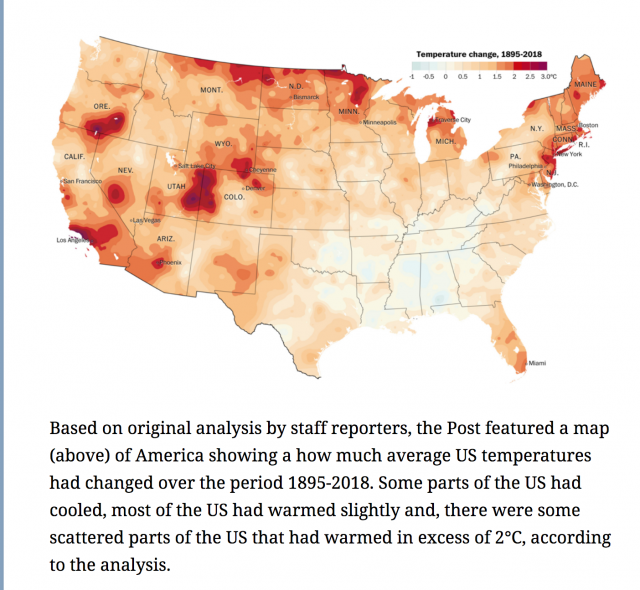 This is taken off this link

I am going to dig into this a bit more than just calling it “fake news”  I think its one-sided news. It has merits, but raises questions about the cause, and those  questions seem to be ignored. Even though when I first read it I was taken aback by the lack of questioning in the article written here, I have learned not to just write stuff with an immediate reaction. So I worked out, sat in the Sauna with my life support group, the coaches of the Nittany Lion Wrestling Club,  updated  my clients on the new European weeklies which is  showing a much cooler pattern, showered, ate dinner and now here I sit.

The Serenity Prayer comes to mind before writing things like this:

First of all, it has warmed, but only a few places have warmed 2c since the 1800s. In addition, this is comparing Cantaloupes to Honeydews (not quite apples to oranges). By that I mean the temperature measurement is 2 different measuring techniques of the same thing. Temperatures before  the satellite era, which have been subject to massive reanalysis ( which is a very valuable tool for all of us, but does have inherent risk) involves the adjusting DOWN of previous temperatures. The lower it was before, the more modern warmth appears warmer.  But in the satellite era, the warming has been on the order of  .4C. Keep in mind it is distorted, with much more warming in colder, drier areas, than in the warmer more moist areas. 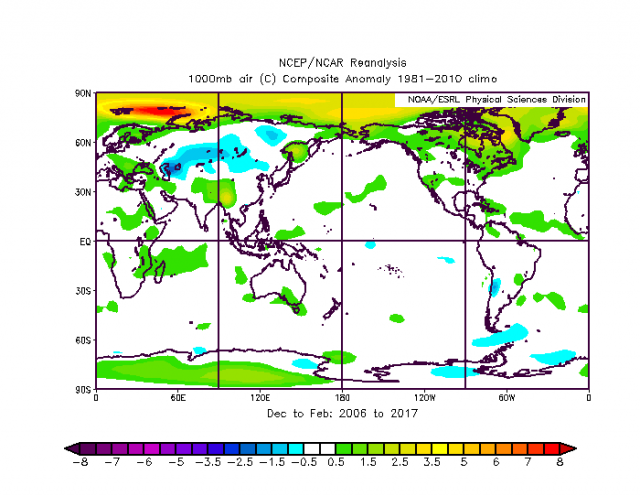 Water Vapor increase below. Notice how small amounts make the biggest differences in cold, dry areas, where the bulk of the warming has occurred

Right off the bat, the warming can be traced to the effect of Water Vapor (and rightfully so given its the number one GHG) with the distortion of warming in the coldest driest areas as one might expect if it was water vapor, butter water I will get to that in a moment.

But let’s just say that the map above with all the US warming is right. Again only scattered areas in higher elevations that are notoriously dry and without much accurate data in earlier times have warmed 2c. That is hardly representative of the entire country

But warmed is a relative term. See that’s the problem, we use warm and cold to describe temperatures because that is how we feel as humans. Temperature is a physical quantity which describes how quickly molecules are moving inside a material.

In addition, an average temperature is made up of nighttime lows and daytime highs,  What if it is the nights that are warming more and the days are not. Can that point at co2? Or is it water vapor?

And here is where the article refuses to explain other plausible causes of warming. It is highly unlikely co2, but increased Water Vapor. In addition this is all part of natural climate cycle theory, which people like me were taught way back in the dark ages (coming ice age, in the 1970s) that increased WV would warm the coldest driest areas by creating more clouds since slight amounts of moisture would lead to extra clouds and precipitation in very cold dry air and the air would warm (more cloud cover keeps temps up in polar areas, and at night in are further south). But the same increase, providing the overall profile of the atmosphere was not warming would lead to more daytime clouds and limit temps. This was all driven by the cycles in the ocean which are dependant on many things. The sun being a big influence of course as over many years if total solar irradiation is high there should be a buildup of heat in the oceans.

Dr Willie Soons work on this comes to mind,  showing the relationship of TSI to WV.

The oceans warm, more water vapor in the air, the earth temperatures rise, but do so in the coldest driest areas more. 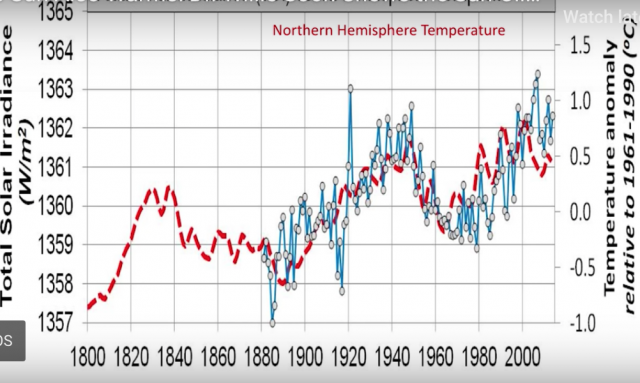 But the warming is in the coldest driest areas where it starts to snow more (it warms, but is still very cold). We are seeing that in the HHEM snow cover. 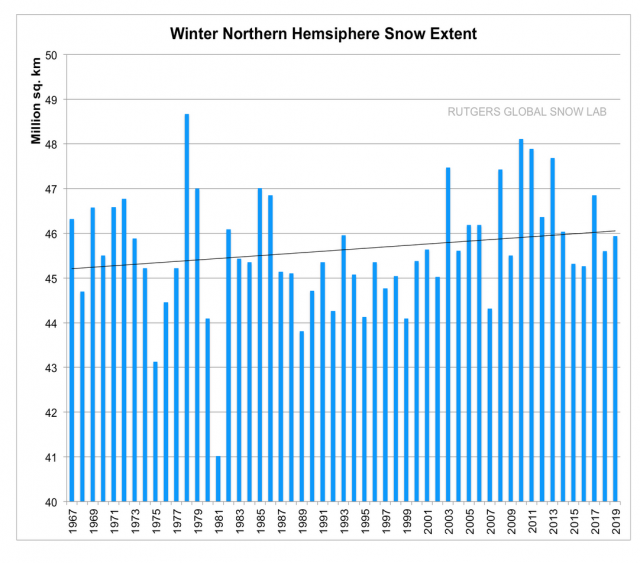 And the proof in the pudding is that  ITS NOT GETTING HOTTER IN THE SUMMERS ACROSS THE US, THE WARMING IS COMING AT NIGHT! 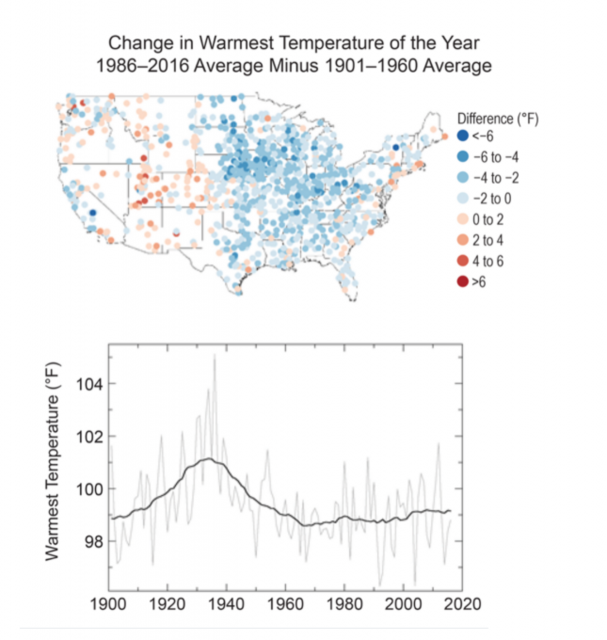 The worst heat was plainly seen here in the 1930s.  So the heat today is being distorted, just like hurricanes today are being distorted, when the frequency of major hits was much higher in the 30s, 40s and 50s. The common thread is only report one side of the issue and do so when there can be attention to it because an event is occurring. I call it Weaponizing the Weather, which is a chapter in my book.

We are warmer in the notoriously dry areas of the Rockies, but where increased moisture is available from warmer SST’s in the Gulf of Mexico and the Atlantic, as prevailing winds across the US turn into the south from the plains east in summer, daytime maxes have been cooling!

You can see that in the last  6 summers for instance.

Here are the maximum temps, for a large part of the nation it’s not getting hotter Very important given the pronouncements after the  3 scorching summers of  2010,2011, 2012  which resembled closely the summers of  1952-1954.

Very warm water off the west coast is enhancing the western temperatures, but is the ocean, home of  99.9% of the heat capacity of the planet being driven by slight increases in co2 and its feedback processes? Questionable at best,  and most likely, unlikely.

Now look at the nightly lows. 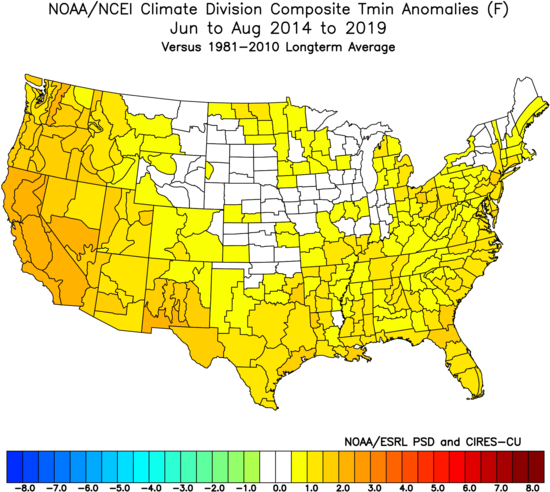 They are higher. More moisture in the air, higher dewpoints meaning the temps don’t drop as much at night, and so the average is warmer, but the heat of the day is lagging. 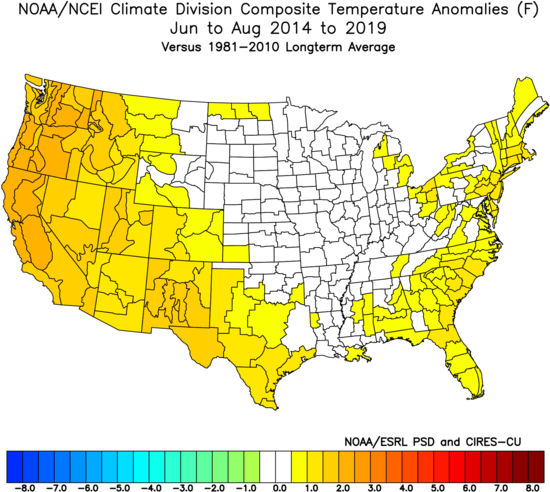 Now here is the kicker. Opposite the 2013 hysteria over a new perma drought dustbowl developing, it has gone the opposite way. 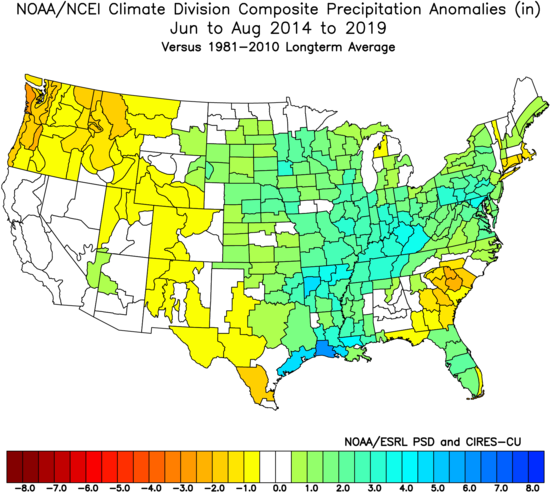 Precip in summer is well above normal.

Now, why would that be?  Because the assumption was that the mid and upper levels of the atmosphere would warm in tandem and so the increase in low-level moisture would be counterbalanced by warming aloft and it would be dry and scorching hot ( which is what happened in the 1930s, when c2 was much lower)

but much cooler nighttime lows: 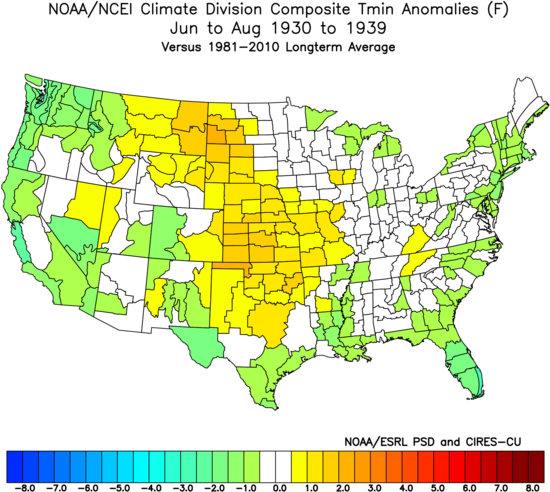 Why could that be?.. THE LACK OF PRECIP 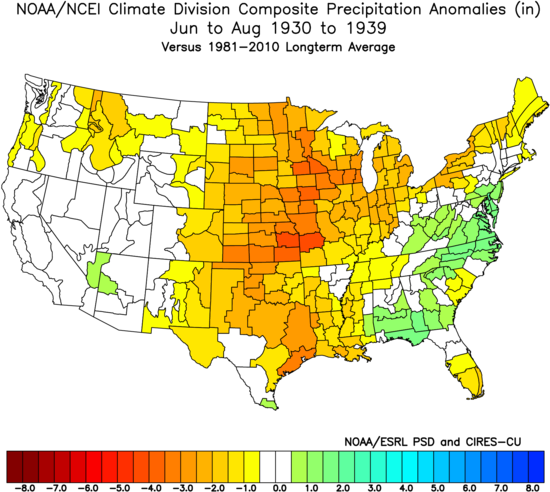 Of course like so many climate hysteria forecasts, this busted, And another old school adage in the weather comes to mind: ( again from the 1970s) Never trust warmups that start with rain.  That is applicable to shorter-term forecasting, because  it means  if there is resistance to the warmth in many cases so there is precipitation,  But in the larger scale, the failure of it to dry out, which is conveniently ignored and swept under the rug ( this is a spectacular bust, by the way, it went the opposite way) is signaling resistance  that is natural to the climate cycle, A look at Le Chatelier’s principle:

When a settled system is disturbed, it will adjust to diminish the change that has been made to it.

There is a search for balance, not a tipping point with the climate becoming more extreme.

Great read on this here:

In addition, the dirty little secret is that nature abhors positive feedback. You can read about that here:

These are basic principles, that are seemingly ignored in the hysteria. But if you come from my background and experience were taught to you in your climatology classes. No one is saying the AGW idea should not be considered. At least I am not saying that. What I am saying is that when I read this is I was amazed at the lack of looking at other plausible reasons for what we are seeing. I also questioned taking areas with notoriously poor data concentration and somehow making that seem like what is going on over the whole country. We have a good basis for temps now, the satellite era, readjusting temperatures down before that should be viewed with some degree of skepticism.

And therein lies the difference between people like me and the people that are growing increasingly impatient and sounding more tyrannical in their pronouncements. I am not out to shut others out but why is it they want to shut down the long-standing ideas out and demonize anyone that may try to point that out? That means the motivation can not be the pure search for the answer, it has to be some other motive. The reader can decide on that.

I never ask anyone to believe me. I do ask them to look for themselves, and be open-minded as to why there is skepticism on this matter.

So in the end, the issue here with this presentation on ” Extreme Climate Change has Arrived in America” is because not only does it not entertain the questioning of the argument from basic long standing ideas but ignores the  “So What” factor. Like it or not, life has never been better and keeps getting better, which brings up the final point ignored in this: Previous times warmer than now were called climate optimums, That was not because of climate disasters but the opposite.

So if extreme climate change has arrived in America, So What? Man adapts and moves on. Assuming society remains free enough to adapt and advance. Perhaps that is the story behind the story, but I am done for now.