There they go again. A new paper relying on modeling rather than real-world observations, claims global warming is creating a food production crisis. The media are breathlessly promoting the doom-and-gloom paper, even as global food production reaches yet another new record.

Climate alarmists have published a new paper in the obscure journal Science Advances, claiming all modeled scenarios of global temperature increase will result in falling food production by the end of the century. According to the authors, immediate and substantial action to reduce global greenhouse gas emissions could keep the decline in production to 5 percent. With less action taken, the alarmists claim food production will decline 25 percent.

Computer models however, are only as accurate as their programmed underlying assumptions. Computer models that are programmed to assume more atmospheric carbon dioxide (which horticulturists pump into greenhouses to enhance plant growth), warmer temperatures, fewer frost events and longer growing seasons, are bad for agriculture. This will of course predict that all warming scenarios will cause crop production to fall. Fortunately, we can test such assumptions against real word crop production as global temperatures have warmed.

According to the United Nations Food and Agriculture Organization (FAO), global crop production is experiencing long-term, mid-term, and short-term improvement (http://www.fao.org/worldfoodsituation/csdb/en/). New records are being set virtually every year. FAO data shows global crop production – as shown in the FAO chart below – increased 10 percent in just the past 10 years as our planet modestly warms. 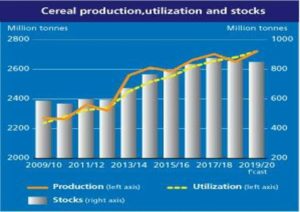 The news is even better regarding yields per hectare or acre. Yields per acre are consistently increasing in nearly all nations, with less land required to grow a greater amount of food. In the United States, for example, yields per acre have increased 25 percent during just the past decade. (https://www.theglobaleconomy.com/usa/cereal_yield/)

So even under a worst-case scenario, global warming would have the impact of – *gasp!* – keeping global crop production steady at where they were just a few years ago. However, even that appears unlikely to happen, as all real-world evidence shows crop production continues to climb and set new records every year with ongoing warming and each incremental rise in atmospheric carbon dioxide.