CFACT mixing it up at COP 25

While international bureaucrats and celebrities gathered at UN COP 25 in Madrid, CFACT engaged them every step of the way.

Just as I was finishing up doing an interview with Polish TV, I turned around and in came (now presidential candidate) Michael Bloomberg to the “U.S. Climate Action Pavilion.”  While this sounds “official,” it was actually set up by global warming campaigners to counter the actual official position of the  U.S. delegation that America is better off out of the UN climate regime.  According to Forbes, Bloomberg’s $55 billion+ fortune makes him the 13th richest person in the world.  He paid for much of the alternative U.S. pavilion personally.  When he uses it as a campaign platform should he be declaring it as a campaign expenditure? 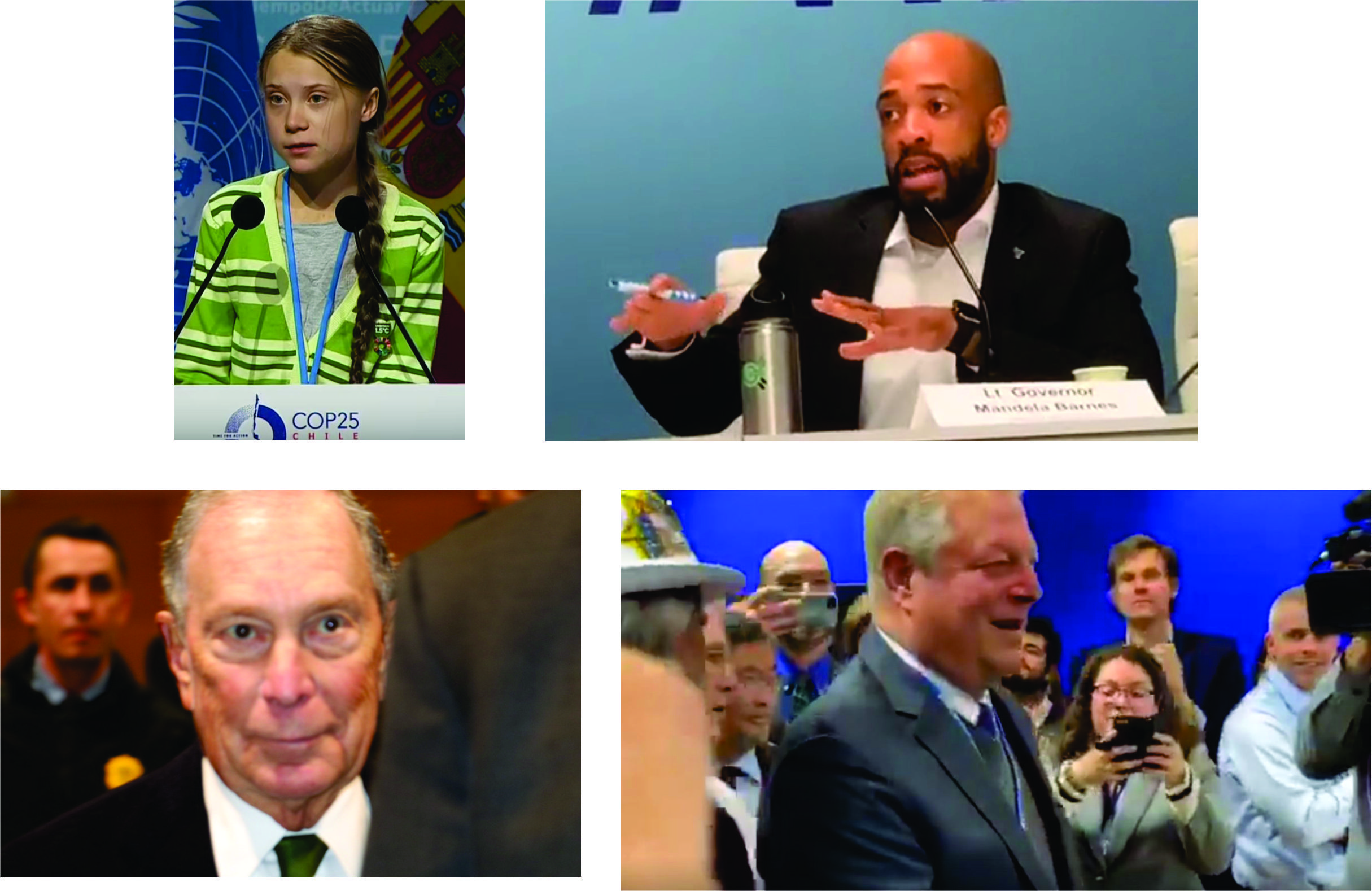 Debbie Bacigalupi is a top activist working with CFACT in Madrid. She’s joined CFACT missions to Paris, Australia, Malaysia and other hot spots around the world.   Debbie is great at getting up close to the big names, getting great pictures, and raising the inconvenient questions that deconstruct the warming narrative and ferret out the truth.  As a result of Debbie’s good work, CFACT’s team had close encounters with Gore, Greta, Kerry, Bloomberg, Harrison Ford, Speaker Pelosi, Senator Whitehouse, scientist James Hansen and other celebrities of the warming kind.CFACT’s Marc Morano engaged in quite a dialogue with Canada’s Dr. David Suzuki — the same Suzuki who infamously once called for global warming skeptics to face criminal penalties for daring to correct the climate record with facts.  Suzuki broke down. “You’re evil!” he shrieked at Morano.  Apparently greater accuracy and effectiveness in debating global warming makes you evil in Dr Suzuki’s book.  Let’s all visit Marc if Suzuki succeeds in locking him up in political prison.

“Do you still fly your private plane up the California coast to get a cheeseburger?” Marc asked Hollywood actor Harrison Ford.  “I’m a vegetarian now,” Ford replied.  Shrewd response.  Still, one wonders how Mr. Ford’s carbon footprint compares to “Indiana Jones’?”  Take a look at CFACT’s video of Marc asking Harrison Ford what changes he’s made to his lifestyle to combat global warming.

Marc and the team then wheeled around to the COP 25 Burger King where the global warming elite chows down on burgers when not busy planning how to reduce our over-the-top lifestyles.  Fox News picked up Marc’s story. CFACT also produced another short, humorous video on this “whopper” of an issue which we will post shortly.

CFACT took on the “Union of Concerned Scientists” and Greta Thunberg’s children’s crusade by attending their press briefings and challenging them with tough questions.

CFACT then blanketed the delegations with our latest hard-hitting 36 page climate skeptical “talking points.”  You’d be surprised how well they are receive!  You’d also be surprised just how many delegates here at the UN climate summit are fully aware just how much of their official narrative is nonsense designed for a few to make a buck.  One-on-one they tend to be surprisingly candid.

While CFACT’s crack team worked the halls of the UN summit in Madrid, CFACT senior policy analyst Bonner Cohen hit the air waves back home.  As a featured guest on such stations as WSBA (PA), WIBA (WI) and USA Radio Network, Bonner explained what the UN is up to on a total of seven radio shows this week.  Our information on our web and social media sites have also garnered significant traction, and took off when Time Magazine named Greta Thunberg “person of the year” and brought the UN climate agenda (briefly)  back into the public’s awareness.  Check out CFACT’s response on Facebook and share it with your friends.

We’re into that standard last phase of the UN climate summit script in which they announce big trouble getting to agreement and then pat each other on the back for engaging in last minute marathon sessions that lead to a “break through.”

The real truth is that they are positioning themselves for next year, hoping to be operating in a post Trump environment in which the U.S. dives back into the climate agreement and starts spending like a drunken sailor before any discipline sets in.  Keeping people educated on this issue is crucial if those of us who approach the issue from a position of sound science and individual freedom hope to carry the day.

Thank you to everyone who helps CFACT be your eyes, ears and voice in the UN climate process. You’re the best!

P.S.  When Time Magazine made Greta Thunberg “person of the year” they brought this UN climate conference to the front and center.  They also illustrated how far beyond the pale of reality this issue has traveled.  These people are dangerous.  Thank you to everyone who chipped in so generously to help CFACT expose what they are up to and use solid facts to push back hard.  CFACT’s friends are the best.  Will you make a crucial gift right now and join this important work?  Without you everything stops.  We’re grateful.