Global “weirding” or nature being nature?

1)  That “climate change” would be blamed for cold the way it is warm.

2) That the cold we jumped on 2 Sundays ago had merit.

But are things getting weirder?  The question is how hard did you look for weird things, or what you consider weird? Now lets take 1966. The DNS at 500 mb are pretty darn close to the DNs with this outbreak. 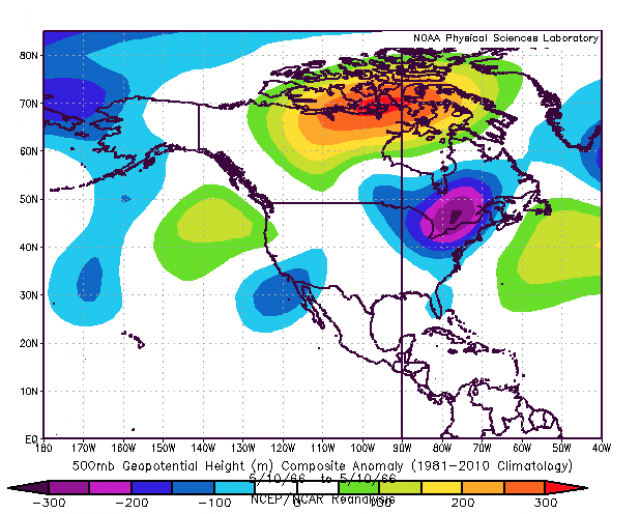 Same kind of look with the tail sticking back and the collapse into the northeast. 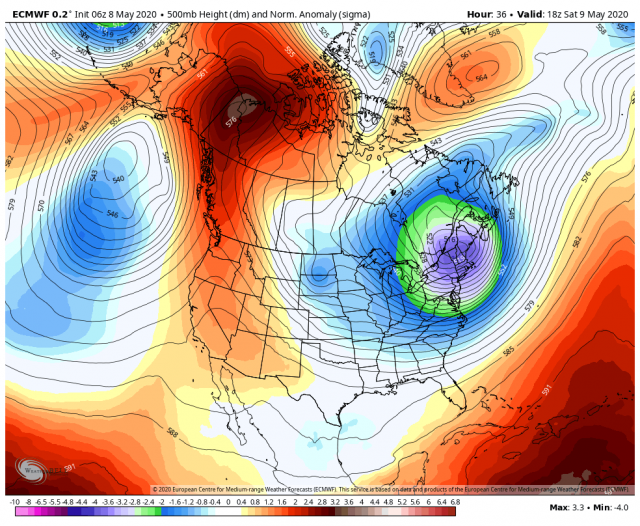 Many all-time Record highs were reached. Yet a week before a monster cold shot into the east with record and near-record cold!

A month later, May 19th, snow flew all the way into NE  Piedmont with this. 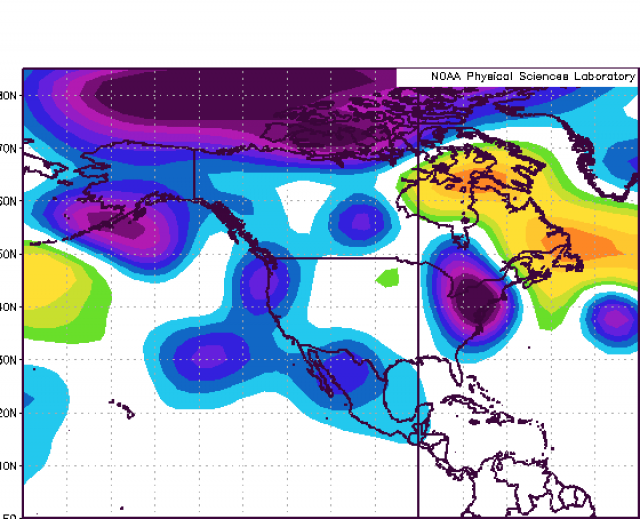 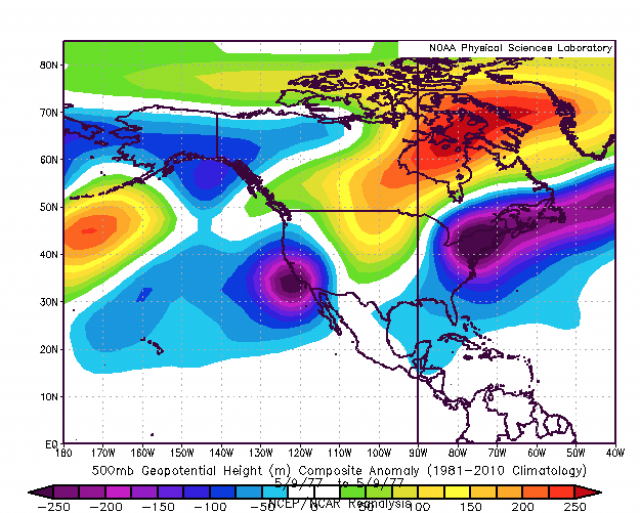 You want global weirding? Look at the intensity of the positive that shoved the negative into the northeast with the latest heavy snow on record in parts of southern New England. (Providence for instance 6 inches)

But wait there is more, within 10 days of RECORD HEAT in some places that had just record cold Chicago experienced 9 consecutive days of 90 plus!

So isn’t that weird? No its weather. It’s nature doing what nature does.

Here is another interesting tidbit. Cold Mays are notorious for early season tropical cyclone development in the western Atlantic Gulf or Caribbean. So you will look for that kind of thing. In fact, it happens more often than not. So if we get that is someone going to say what is something we have seen many times before weird?

One more example for the road, ( Seriously I can bore you silly with more)   June 22, 1972. Agnes.  A piece of the vortex crashed into the east and captured the storm and early season version of Sandy for instance, but on the first day of summer  sleet was reported at Phillipsburg Pa with 4 inches of snow atop Snowshoe Mountain.

Now if one wants to play the climate change game (btw it is warmer as I have said countless times but I think its primarily natural) there an argument, given if one looks they can find such extremes, that instead of this being weird, its a case of us returning to where we were?  Now I don’t believe that either, but if you are seeing things that rival previous events or perhaps go a  bit beyond.  It is 40 to 50 years later, why is that not nature doing what nature does?

And therein may be a problem. You see if you have not looked at past events with a fine-tooth comb and wonder, how the heck did that happen (a November 1950 Superstorm, a 1938 hurricane, and countless other examples). You look at models, then you may be tempted to say, wow, this is really weird. It is out of the ordinary, I think you can agree, despite the winter bust. We always said we had to look for the return of major cold before we would shake all this out. I was in Mt Pleasant Michigan Jan 31 telling farmers that, which made me about as popular as the plague given last year’s horror show. But at least they knew, and you know it too, once enso 4 cooled the MJO starting behaving the way I thought it would later in winter and that set a lot of this off.  At last look, the MJO was a natural phenomenon. BTW I don’t think its making things more extreme, but instead telegraphing better where models may go astray. And we have a wonderful example of that this year. Since November, 3 months have been cold in the plains east, and 4 warms. But the models a month out had no idea there was that kind of cold coming.  10 days into the month it did (btw how is that a forecast)  but 20 days out, when energy companies, hedge funds, retailers, and in fact almost anyone needs to know, they were nowhere to be found.

Here are the forecasts  vs reality 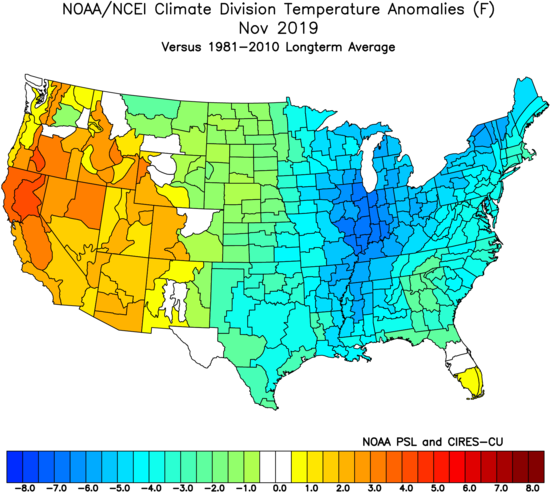 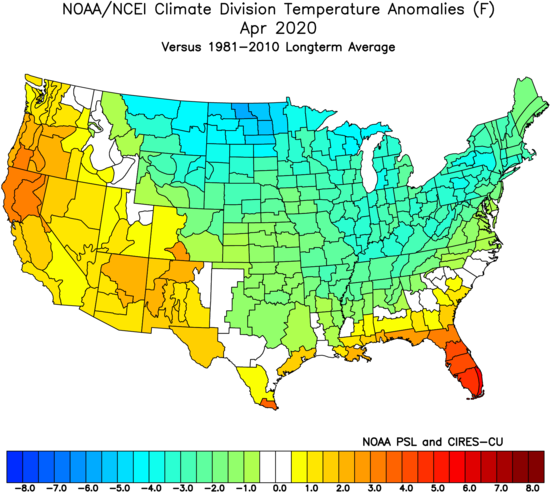 No question it is great picking out the warmth, but the most it can do is hint at cool by making it less warm.

Look at the change in the temperatures over the arctic it had forecasted for May, June, and July 2 months ago

There are repercussions of the global temperatures being warmer,  something that is distorted.  Modeling can not handle it,  Instead of arguing over the cause or say things are getting weirder, or more extreme, which if you look back in the past you can see is likely not the case, we should be developing modeling that can handle when something different is going to happen. The first thing I would do, given the warmth of the tropical oceans, would be to get on the MJO forecast over a longer period of time. If you can see where that is going to go, you know the model will have to at least have its influence blended in.  That is exactly what we do. We look at the models, but then correct them for the strength of the MJO. Why? because where its the most energy in relation to source regions of the weather? Right where the MJO patrols. We are seeing a graphic example of that now, and in fact the last 7 months, it got into cold phases for a time in November. It was cold. It has done it again.

So I don’t think the greater amplitude MJO is going to cause extra mayhem, but instead, it could be a valuable clue to when to look for something the models may not be seeing. But academia/gvt who are on the cutting edge of this should be looking into this.

The danger is going to be like winters of 2013-14, 2014-15 that modeling like those years, will not see significant major cold periods. April/May are saddle months, not that big a deal. But if you had it occur in a 60 -90 day period in the heart of the winter season, well it was not so long ago we saw what happens. Conversely, we saw what happened this year. So this is an opportunity to improve forecasting IMO.

The second danger is that if there is a sudden snap to colder in the global pattern which would be economically problematic given the number of people on the planet now and where they live, models will likely never see it,  We all know I feel they over attribute co2 since the model that had the least warming  and closest to what happened supposedly had the least co2 feedback in it. But once going in a direction, it is very tough for the model to see something UNTIL IT STARTS HAPPENING. The warmth of the oceans means that until they cool, we are likely not to have to worry about that, and the state of the oceans are a product of many things some of which we really don’t have a handle on it. So we know the result of what we see now, but 30 years from now, well I am skeptical of “knowing” what is going on. If you forecast enough you know 30 hours can be something to be skeptical of knowing,

Listen I would love to be able to say, wow this is getting wilder by the day, you need me to forecast it cause those that know me know I am like a starving dog with a piece of red meat in front of them when it comes to the love of Extremes. Extreme weather and hitting it, from far out or close, is like competing in the Olympics to me. ( cue Billy Joel, go to Extremes) Perhaps my attitude is that even a sunny day awes me now, and if you look globally there is always something happening somewhere that has the potential to go to extremes. But that is nature, and the limits on nature are set by nature.  Is it weird, well if you are looking at it one way, you may think so. Another way, you view it in awe and understand that its the creation on display.