Perspective on recent paper on hurricanes getting stronger

As one of the worlds oldest active  hurricane forecasters,  I think I am allowed to comment on this:

Now, notice I did not say “best” or use the term expert. Part of that is because if you forecast long enough (over 40 years now) you realize that such terms are an invitation for nature to shut your mouth.

After all, its not nice to mess with mother nature!

Now first of all,  I don’t necessarily disagree with this, but I do want to add perspective. I respect the people that did this, but there are  questions that I want to be addressed.

First of all, the study is over  the last  40 years. So we don’t  know how this would have stacked up before the satellite era, specifically  the  30s-60s when the US got hit by by major hurricanes far more than the 40 years of the study:

So right off the bat it is obvious that if we are increasing intensity, there has to be a reason for why we are not getting hit as much. I have written about this many times, and at the very least, there are factors that are open for debate.

As far as a big season, if it does come, it should be no surprise as this was written in April, the first forecast made in March!

The fact is that hurricanes need focused energy to thrive. In a simple way, the function of tropical cyclones is to take heat out of the tropics. The imbalance that develops  naturally between the warmer tropical waters and the colder temperate areas, redistribute that heat (are they socialist?, ha ha). But if its already warm in those areas and pressures are lower, there is a distortion of that function. So while there may be more storms, the mature storm will spread out and weaken as it approaches an area with lower than average pressure. This, unless the weather pattern near the coast favors development thru enhanced convergence (a product of higher pressures to the north of the storms).

Notice the lower pressure in the tropics, the higher pressure over the North Atlantic:

One of the dangers of this year, btw, which we outlined from back in March was the similarly in that pattern. When you have a pressure pattern like this there is enhanced convergence in the tropical western Atlantic.

Look at the SLP for the season so far: 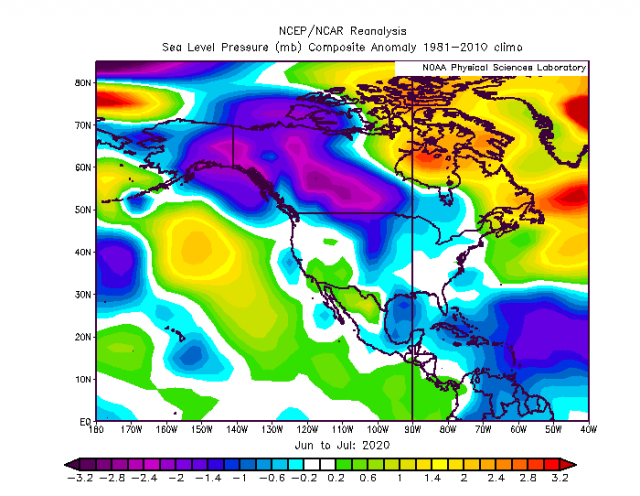 So if this continues we will be seeing major threats, which if you saw our hurricane forecast so far has shown where the strongest action relative to normal would be. All storms that have hit, except Cristobal, at their peaks! 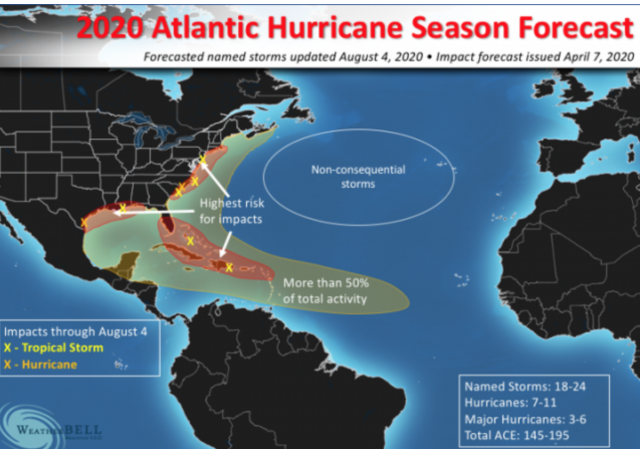 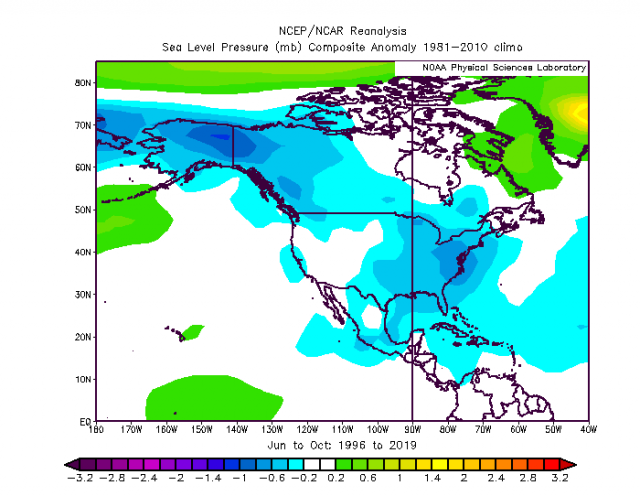 The center of lower pressure is TO THE NORTH OF THE TROPICS! So the set up for long tracked classic storms is not as favorable. But again,we look for patterns that enhance convergence near the coast, not spread out, as what happens when there is low pressure to the north. This is a direct result of the warmer planet and overall a positive. This, since repeating the 30s-60s with the kind of build up we have on the coast, would lead to much greater damage costs than the pre study era. But notice that storms like Katrina, Rita, Wilma, Irma, Dorian, Matthew (just to name a few) were OFF THEIR PEAK. While the short tracked Harvey and Michael were at their peaks. No question, a warmer ocean means if everything is lined up right storms can be stronger. But the greatest threats would be in the tropical islands, rather than mainland Asia or North America. Many of the storms are what we call fish storms, out there in the ocean where they bother no one. But again this year we are worried about the pattern being quite favorable near the coast.

I wrote this last year where evidence can be seen:

The other inconvenient truth for this paper ( again just to put things in perspective): If there are more storms and stronger storms, why isn’t the ace index, the measure of accumulated cyclonic energy, increasing? Major landfalls are not increasing. Majors are not increasing. Imagine if we had the kind of detection methods in the 30s-60s that we do now?

But it is interesting that this paper came out just before what a lot of people think will be a big burst in hurricanes. But before it occurs, a lot is already being made of how fast we got to 10 storms. Yet the ace/storm is near the lowest on record (storms are weaker) and the total ACE is one of the lowest on record for 10 storms. But the most remarkable thing about this season GLOBALLY, and this is what raises my eyebrows about bias, is how quiet is the western Pacific. This is the world’s most productive basin and its on pace for a record low ACE. Is that not a good thing, to balance out the bad?

As far as slowing moving storms, well if they are moving slow in the middle of nowhere, who cares. If they are approaching the coast then upwelling of the water causes the storms to weaken. Florence was classic. It is true rain amounts increase with a slow moving storm due to duration. But the swap is the wind weakens. Florence weakened coming to the coast with very warm SST’s. As for Harvey, the storm stalled because an anomalous cool trough of low pressure trapped the storm close enough to the coast, so that after hitting land moving quickly to the northwest, it stalled close enough to the coast so the processes associated with a tropical cyclone  continued to pull in huge amounts of water into a environment that increased condensation rates ( due to cooling).  So the slower movement is on the table, but there are many more out in the middle of nowhere that are moving slower than the ones coming to the coast. In addition, past storms are legendary for rainfall but I am not going to bore you to tears with that.

This sums up a valuable and excellent study. However as you can see there are some debatable points here, including the idea that there are positives to the warming on the table. So it makes sense that I would add my 2 cents.