Is WAPO unaware of hurricane history?

So this showed up. Please read it. I want to make sure you look at the opposite side of the issue.

Ah yes yet another new study is used.  The 2020 season is a harbinger of things to come. What, storms with some of the lowest average ACE index/storm on record? Near record low Pacific activity?  Global activity top 10 LOWS last 30 years.

But how long do we have to hear this, especially since the late Dr Wiliam Gray, who you saw in Climate Hustle 2,  was explaining well before why hurricanes would get worse compared to what they were in the 70’s and 80’s. Yet his reason for the uptick was natural and comparatively it did occur. But it has never gotten to the level of the 30’s-60’s. All this is in spite of the constant jumping on the worst man made AGW bandwagon ever.

Basically they co-opted a correct forecast made from natural reasons, and then decided to pile on with their missive, and that part is easily countered. I have done it many times. I did it in my new book.  The Weaponization of Weather in the Phony Climate War.

Given this article, I have many examples why this too must be challenged.

What is puzzling to me is how people just buy into the idea that Hurricanes are worse than they used to be. I get myself into “trouble” because I know too much. It’s not that I am smarter. It’s just that I love going through accounts of storms. For instance look at this link:

These are all the hurricane reviews back to 1872.  I wonder how many of the people pushing how bad things are in the tropics have this as something they love to read.. over and over and over again.  What I find bad nowadays is that it’s frowned upon, or demonized, and by people that may not have gone over each one of these several times. Wonder how I know when storms have hit? From when I was a kid, I would read everything I could on storms and loved the monthly weather review and Weatherwise when it came to the house. Once I got to college, I went into the PSU map room and library and looked at everything I could..

But I guess I am standing on the track of a train that is running everyone over. I see it coming down the track, it gets closer every day.  The cadence of complacency that has got us here,  the acceptance of the idea that that is the latest is the greatest, accepting without question, has overwhelmed most of the younger people in our field. And I can’t say I blame them, I really can’t. They have a love of the field. They want to work in it. They want to go to college.  Its very strange. I often ask myself, what I would have done if I was actually fighting in a war, like my wrestling coach did? Would I do the hard things? (

One of the reasons I call this a phony climate war, (you have no idea what war is unless you are actually in it), I wonder as I look at the younger generation, if I was in their shoes, how I would behave? A different test in a different time, but I wonder about both these things. But I will tell my stories and explain myself the best I can with whatever is left, before everything is outsourced to authority.

No I am not being a Debbie Downer, but in spite of a life of being an idealist, there comes a day where realism has to take over.

So  here are a few of many examples that I look at and wonder why I do not see things like this anymore.  I see a cat 4 Laura come ashore, and it takes a few weeks for reports to come in to even verify gusts to the reported sustained winds.  Yet Laura is a 4 right?. But look at this account of Audrey in 1957  recently downgraded to a 3 from it being a cat. 4. 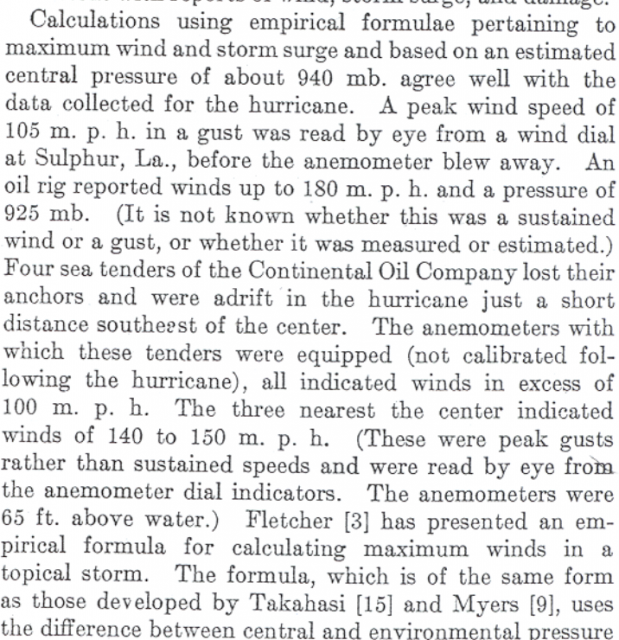 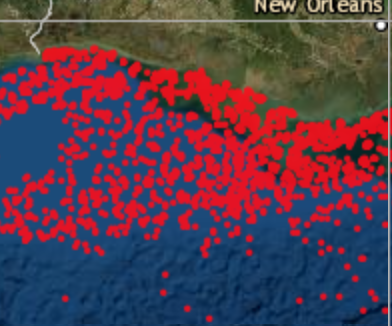 I have not seen any rigs with gusts like that with Laura.

The point is Audrey is downplayed yet Laura is pushed as a sign of the coming apocalypse.

The gust at Cape Henry was 156.  All this is more remarkable because the hurricane was as far offshore as it was! It was supposedly over 60 miles east of all these sites, 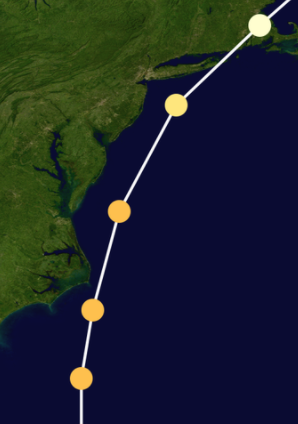 yet produced these winds. What hurricane in the warm era of worst ever has done anything close to that, passing off the east coast?.

How about hurricane Helene in 1958. Again, offshore North Carolina, yet at Cape Fear it produced this..

Think about Florence.  Or Isabel. Or Fran, or Floyd. Any hurricane that has hit NC in the so called worst ever era. Even coming ashore, they did not beat a hurricane that remained offshore. Wilmington is inland and both Wilmington and Cape Fear were on the so called weak side of the storm, as were Atlantic City and Cape Henry in the 1944 storm.  How were those storms establishing records while not even making direct hits, while offshore?

Another example, cause I can go on and on. ( Thats what happens when you stay up at night reading hurricane season reports back to 1872)  But this was the very erratic Ginny a MINIMAL HURRICANE  that was more than 60 miles offshore in 1963  IN LATE OCTOBER WELL PAST THE PEAK OF THE SEASON!

Again that is on the weak side of a storm. The loop it took was still well offshore. 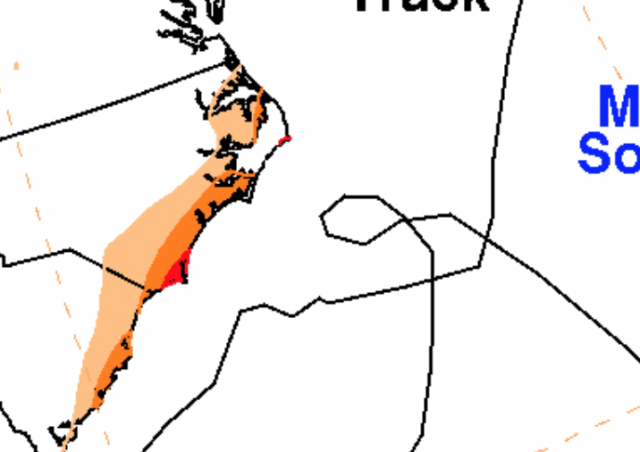 I look in amazement at these things, because I have not see storms as big. Think about Harvey a Cat 4 storm. The extreme rain with the storm grabbed the headlines but that was because a cold trough captured it and the heavy rain bands stalled right over Houston. But think about Harvey again a cat. 4.  vs Carla a cat 4 with this write up.

Look at the extent of TEXAS with Hurricane force gusts,  the entire coast and how far inland. 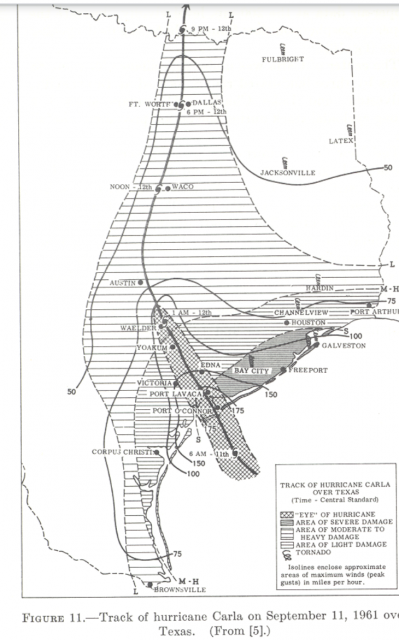 Harvey was not even close. No storm that has hit Texas since then was even close in extent such as Carla.  This is a classic example of why the power and impact scale is much more descriptive.  Because of the diameter of Gales and Hurricane winds  Carla is a 4.5. Harvey is a much smaller storm only a. 3.5 because while having the same pressure and the same max wind, the extent is not nearly as great.  Yet how many people know this? What are people told when a Harvey shows up, does anyone put it in perspective vs. a Carla. Or Laura vs Audrey?

And remember when everyone was flipping out  over  several storms going at once. Well  WE DID NOT HAVE 4 HURRICANES GOING AT ONCE, as we did the day Carla hit the coast. 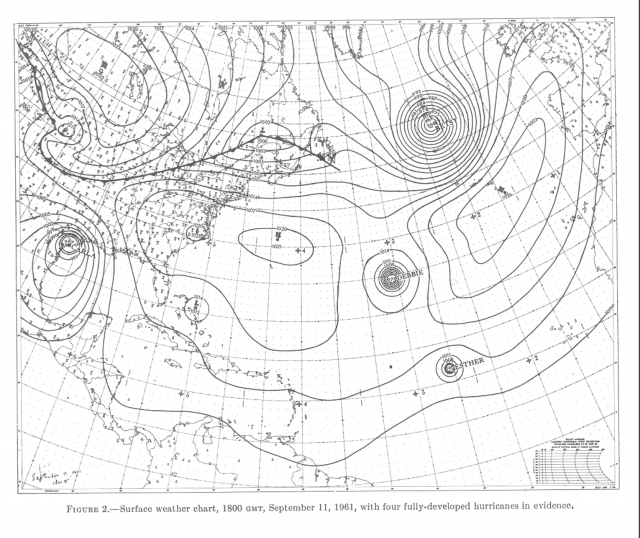 And a tropical depression in the Bahamas as well.

But did anyone bring that up. Anyone put that in perspective.

So you be the judge. I have written on this several times.  As the hurricane season winds down ( I still think we have a couple of more that we may have to deal with) the most I can do is show you such examples.  But as someone with 45 years in the field, there is a world of information out there that does not lie in the latest models, but in the lessons learned from the past. You would do well  to look at it, before it disappears.

One thing off the bat. You notice I ask you to read the article that runs counter to my ideas. I want you to see it. But in that article, do you see examples like this brought up and the natural offshoot which should be why?  No?

Gee I wonder why.