It’s a new horror to scare the kiddies:

Paris: Some animals are “shape-shifting” and have developed bigger tails, beaks and ears to regulate their body temperatures as the planet warms, according to a new study.

The Australian parrot, for example, had shown an average 4-10 per cent increase in the size of its bill since 1871 and the authors said this positively correlated with the summer temperature each year.

For one, do bird-bills cool birds? For two, how many parrot bills were measured in 1871 in Australia and do we think we would know if their bills got 10% bigger? For three, there is no “Australian parrot”, there are 56 different species. And fourthly, even if they had got bigger, and we could measure that, which we probably can’t, how do we know it’s not due to “something else” that changed in the last 150 years, like all the orchards, crops, trees and other things we planted? According to some botanists, there are more foreign plants in Australian than native ones. Maybe that matters?

Though not, apparently, when there is an ARC Grant for climate scares. 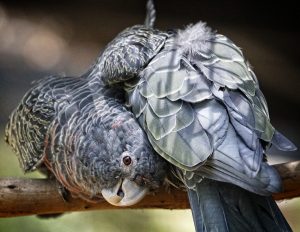 A Gang Gang parrot suffering from a deficiency of carbon credits.             | Photo by Steve Franklin

Never ever before in Australia have parrot beaks changed by 4% in 150 years!

Climate change is heaping “a whole lot of pressure” on animals, said Sara Ryding of Deakin University in Australia, who led the study, in a press release. “It’s high time we recognised that animals also have to adapt to these changes, but this is occurring over a far shorter timescale than would have occurred through most of evolutionary time,” she said.

We know this is unprecedented, yeah,  because back in 2,456,000 BC we know what the size of parrot beaks were in Australia, and how they changed by 2,455,850 BC?  Indeed, for every 150 year period going back to the beginning-of-parrots, 59 million years ago, we have a representative sample of fossilized beaks. That’s 393,000 consecutive sample periods for 56 species spread over 7 million square kilometers.

It takes a lot of data to know that this has never happened before.

Looks like the real danger in modern Australia is that the nation is sinking under the weight of 2 billion fossilized beaks. Either that or the nation is being crushed by incompetent, poorly trained experts in the bloated carcass of Australia’s academic sector.