On March 3rd, White House Press Secretary Jen Psaki, in response to a question about increasing domestic oil production, attempted to shift blame to oil companies by citing “9,000 approved oil leases that the oil companies are not tapping into currently.” In subsequent press conferences, she adjusted that to 9,000 permits and went on a Twitter storm to shift blame.

While we may not appreciate the cynical attempt to deny the effects of the president’s own “no federal oil” policies, we appreciate the White House is suddenly messaging to “encourage” us to produce. When my tweet was picked up by a Fox News White House correspondent, it garnered more attention than usual, leading environmental groups to jump in and pound on the 9,000 approved APDs outstanding. 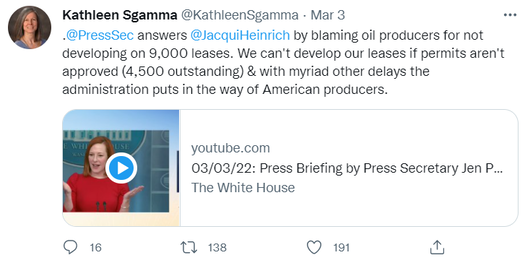 As federal oil and natural gas is a highly complex system and with only 280 characters available in Twitter, let me take this opportunity to provide some insight into the numbers and the “myriad other delays the administration puts in the way of American producers.”

First the 9,000 leases that Psaki cited. There are about 37,496 leases in effect. Assuming her number is correct on nonproducing leases (FY 2021 data are not yet available from the government, even five months after the FY ended), 76% is a very high lease utilization rate. Why aren’t we developing those “9,000 leases”?​

These are just some of the political and bureaucratic obstacles this administration is engaging in to slow American production. Please see my op-eds in the Washington Examiner and The Hill for ideas on how the president could encourage American oil and natural gas production rather than just try to shift the blame.