The one thing the Biden administration can claim credit for is making Weather Great Again.  Not THE Weather mind you, just weather. For the higher prices go, the better it is for the meteorological business community since it ups the ante as far as the forecast goes.  It’s why you see these so called climate experts always forecasting for some distant date that no one will remember, but avoiding near-term seasonal forecasts. That is where you can really be held accountable.  And in that area,  forced shortages through Energy policies is driving prices up. This means there is more risk involved, and so the weather is a bigger factor, It stands to reason that the lower the prices, the smoother the economy is running, and the more it can take a hit from the extreme events that have to occur inherently in the system.  After all when you “ain’t got nothing, you got nothing” to lose. So the lower the price, the less there is to lose.

This is why people questioning my motive as to my stance on the attribution of CO2 to the planetary climate have no idea as to what my motives are. It makes no difference as to what is causing warming. CO2 is not used in any forecast model for the weather, but in climate models, the exception as I understand it was the Russian model, which was closest to the actual rise in the temperature of the planet. 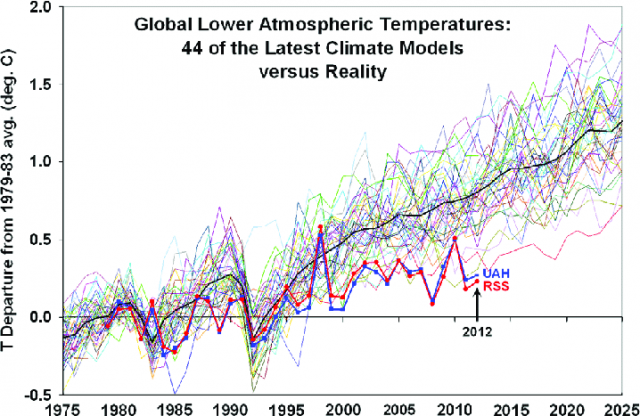 The Super Niño in 2015 brought it on top of the lone red model line far under the rest of the models.

But there is a reason CO2 is not a factor in forecasts that actually have value for people. We have no CO2 to temperature mixing ratio charts, but we certainly have it for water vapor. So if its so darn important, why is it not up there with water vapor as far as the correlation goes? If it was proved conclusively tomorrow that CO2 is causing any extreme event, e.g., tornadoes, shock its spring, shock its getting hot someplace else, and a future shock. If I am right, its another big hurricane impact season and it makes no difference to me. I still have to deal with what I am dealing with now as CO2 is not involved in any forecast that I make–be it seasonal or hurricane or whatever. But for my business, higher prices certainly make a difference–not in the forecast, but in the implications of the forecast. Hence the competition increases since people are looking for an edge.

I don’t care what your politics are. If you ask me for a forecast, I try to nail it. For me, it will always transcend arguments over what is going on 50 years from now, or how you envision society. Its the way I was brought up.

I will give you an example, our forecast for a cool, wet spring, back in winter, so far certainly has had merit. 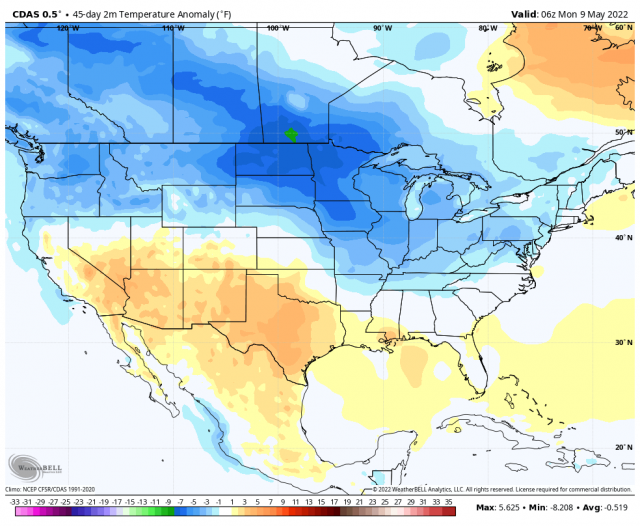 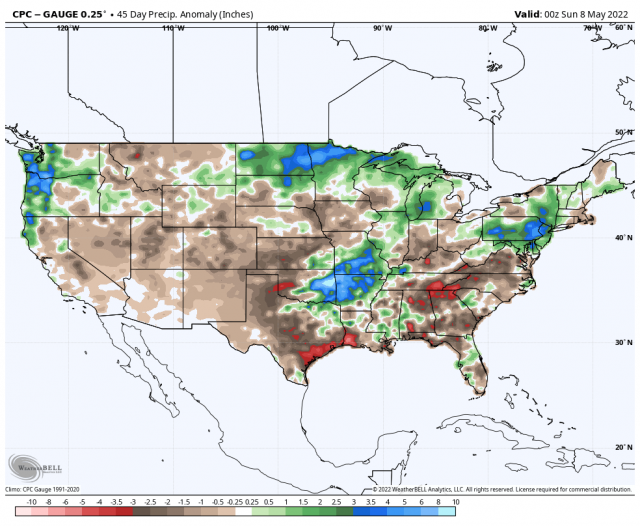 So a lot of places have been cool and wet. No big disaster, but perhaps it may be placed behind just a bit. 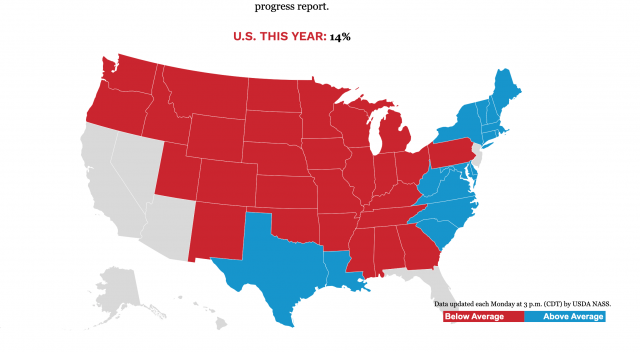 Much of the nation is behind.

But what happens if there is an early-season cold shot that sweeps into some of these northern areas that have been so cold and wet?

So for agricultural interests, that has to be a concern.  This means the weatherbell.com agricultural guru, Joe D’Aleo is already training his sights on it for clients.

Now combine that with the offshoot of the Phony climate war, high prices, less fertilizer supplies, etc., and you get a situation with the ante being upped. And that means a good forecast can help people prepare more so now, than in years when its just business as usual.

The weather has its tentacles in everything (pardon my bias). For my own selfish Joe Bastardi interest in that, I love competition and I want my company to do well. President Biden is making the weather great again. Combine that with hysteria over events that should be expected, with the fact that the media refuses to look beyond that hysteria as to what could be contributing, and the setup there for the weather is huge. I have always considered my job as to look for trouble and supply the forecast for it.

Unfortunately, it will all come to an end, in the long run. The combination of what is a focused effort to shut down dissent–and the fact that eventually this will collapse under the weight of the phony climate war that will send us into a recession and start crushing demand–means this is temporary (this golden age of weather being great again). Either that or reasonable policies come back and try to take things back to where the weather was not as big a deal. For now, The Phony Climate War has made Weather Great Again. Its always been great to me, but now other reasons are there.

President Biden should get the credit for that, and also the blame for the erosion of the foundation of what has always been the world’s greatest economy.