What is it with the leftists’ trying to ruin kids even on topics such as climate? Below is a book my daughter gave me as a lark, by Chris Ferrie and Katherina Petrou: 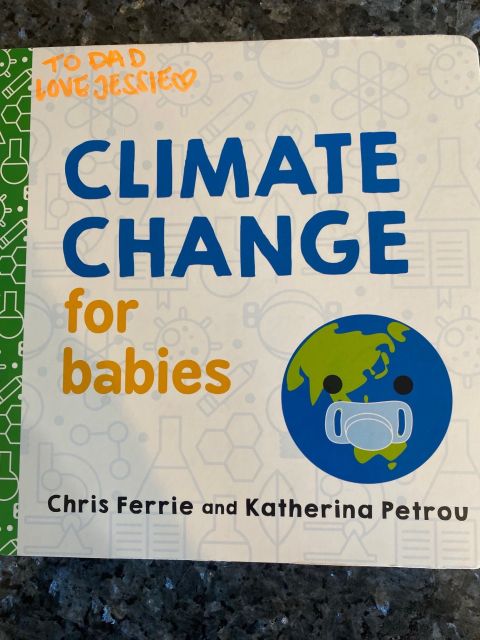 It starts innocently enough, just like a baby does: 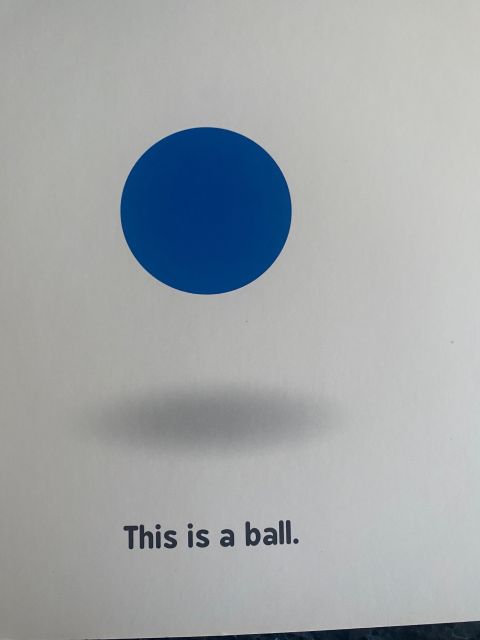 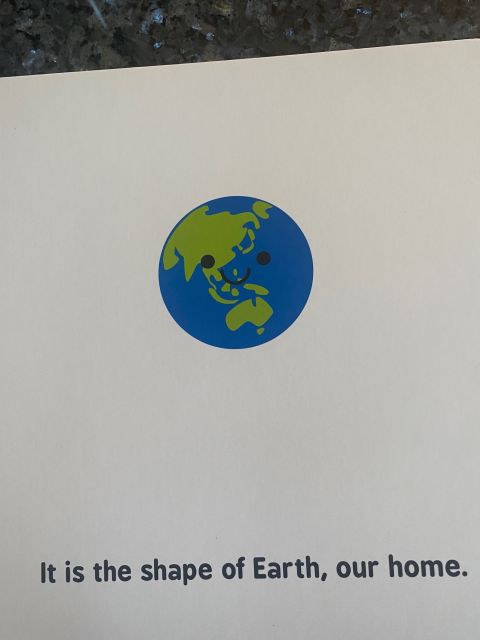 Notice the cute face.  Glad it is in the WPAC (western pacific ocean) since tropical cyclone activity is so far below average.

And like little babies we love to keep warm as it has a protective blanket: 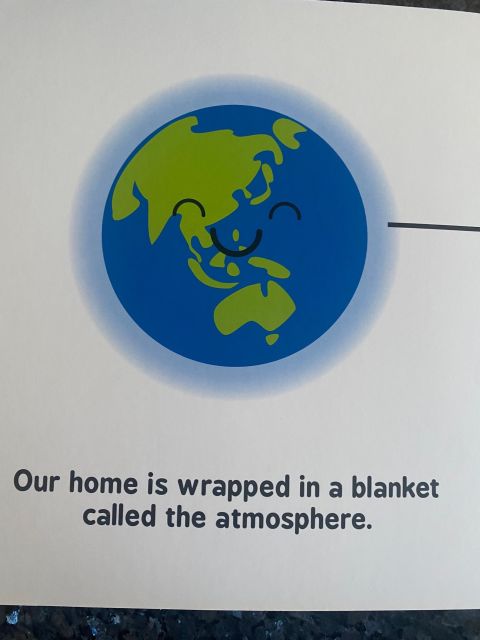 But now the distortion starts. Lumping 3 GHG’s (greenhouse gases) into one piece of the pie is just that: 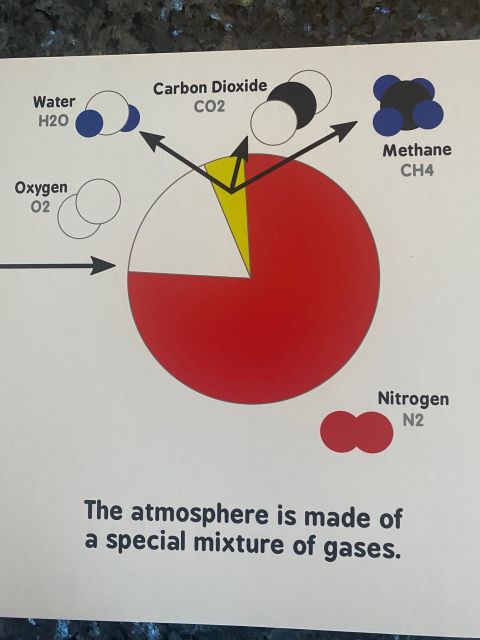 Radiation from the earth is also absorbed by CO2 and radiate heat in all directions. But the bands of CO2 are saturated for one meaning they are already doing what they can do and are limited by all the natural sources around them.

Water vapor is 15x more powerful, yet the pie chart does not show that.  The theory behind CO2 induced warming is ITS INCREASE leads to more warming, which in turn leads to water vapor enhancing the warming. The runaway feedback can be seen in modeling with the only model discounting CO2 warming being the closest to the actual warming. 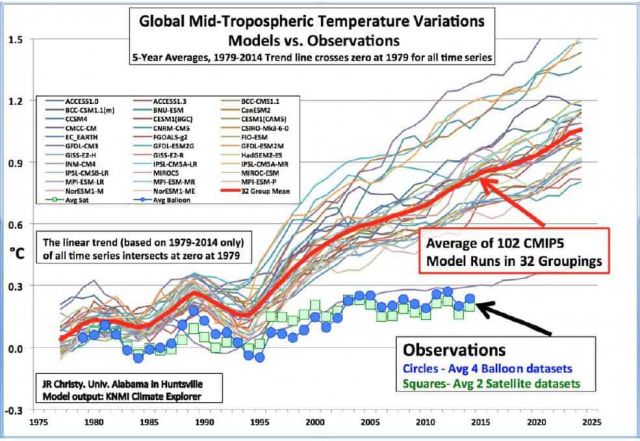 But you cant tell a baby that (you can’t even tell a leftist agenda-driven zealot). Yet they can turn around and start brainwashing kids by having their parents put them to bed with stories of their impending doom due to the very fact that in a quest for a better life, mankind is destroying his life. Interesting, given climate death is plummeting. 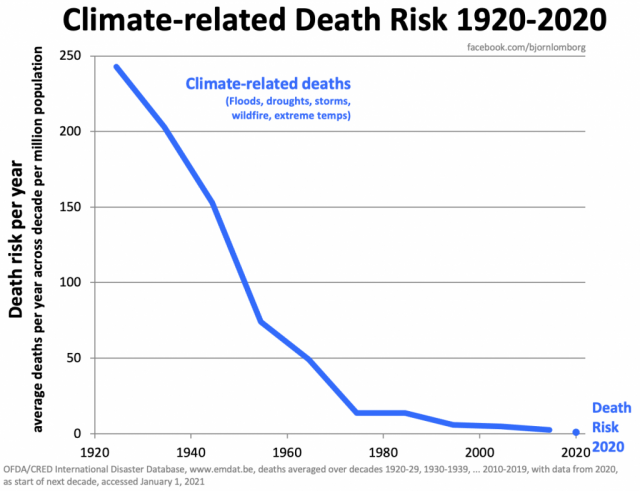 But I better move on.

It correctly says it is a protective blanket. 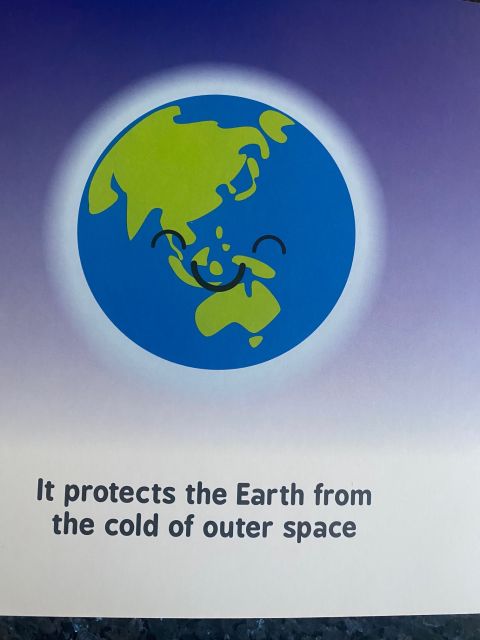 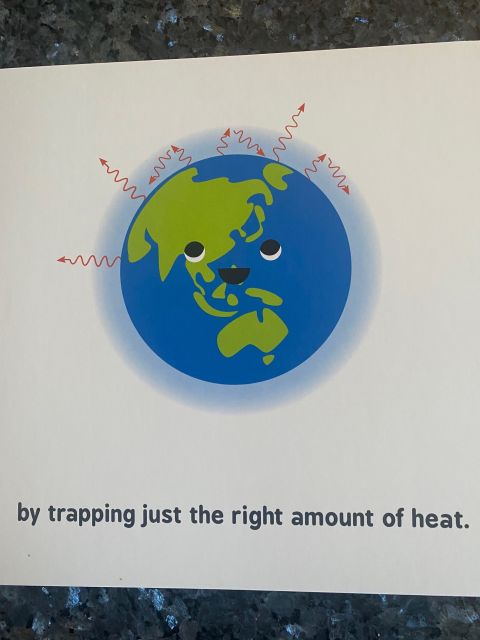 Now the wheels start coming off. 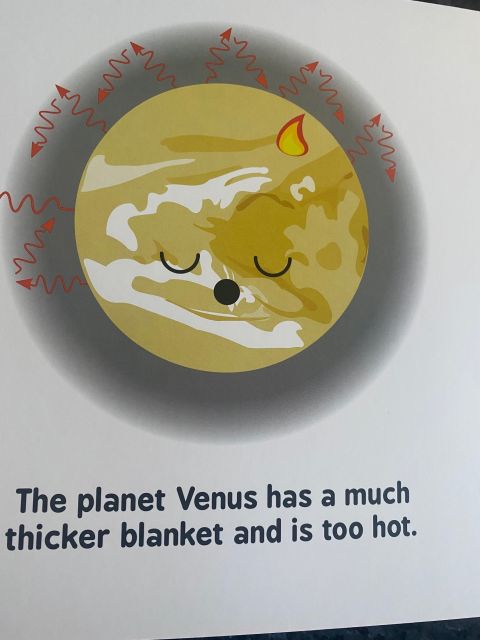 Comparisons to Venus are absurd. There is 250k more CO2 and the atmosphere is much denser. If CO2 is having such an effect, why are there no temperature correlation charts to CO2,  nd just to water vapor? And what of the lapse rate of the earth? Why is that not changing if the increase in density by CO2 increase is causing a problem? 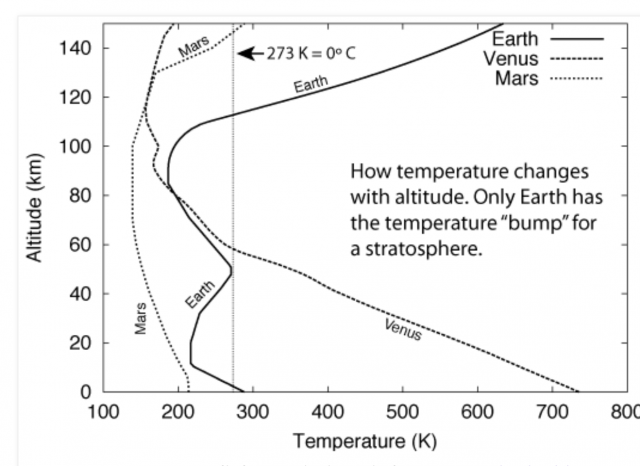 Read this blog by Climate Consensarian called “Lapse Rate on Venus, Part I”.

The increase in density (thickening of the blanket) is not a consideration. So why would runaway feedback warming be? If it was occurring would there not be a response that meteorologists had to use, to update the lapse rate charts? It is minute. It’s why the density argument is a joke (one could see that by the massive bust of the tropical trapping hot spot theory that was all the rage 20 years ago, but you don’t hear about that now). The lion’s share of warming is in the lower levels, in the coldest driest areas at the coldest driest time of the year.  That is directly linked to WV. The feedback radiation argument has some merit, but it’s the contention of skeptics that is limited so much so, that it may be indistinguishable from nature and hardly worth the destruction that the Marxist Degrowth agenda, which is what this is truly about. That is what this phony climate war is about.

To push the CO2 warming point, Mars is used with its much less prominent CO2: 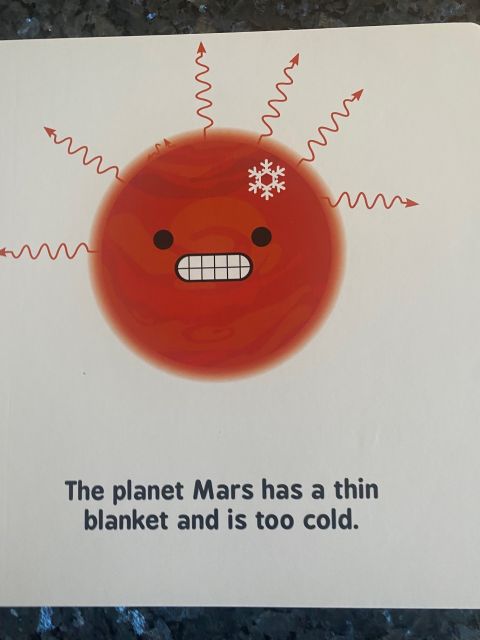 Remember this is not the 3 little bears here. It is also meant to continue the brainwashing of parents or caregivers along with other agendas that are ruining the innocence of children. Because they are reading it too. So implying the increase in CO2 is taking us to Venus, which at this rate would take as much time as the known existence of the earth, is a gross distortion.  Especially in light of the fact that these children are being born into the greatest time to be alive on planet earth, largely due to the leadership of the American experiment in individualism and exceptionalism.

Right now, its all good. 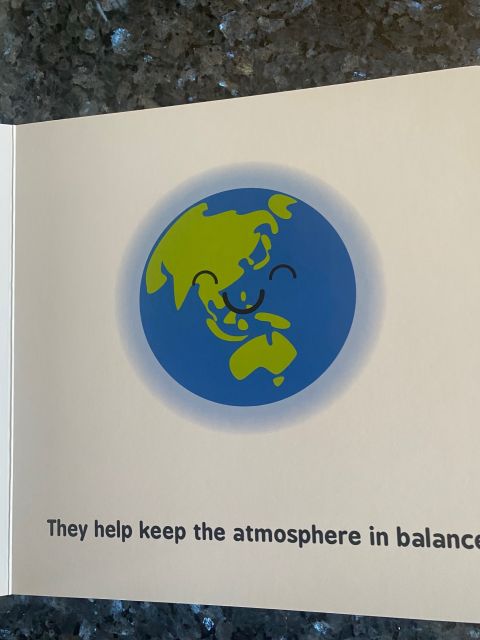 But here we go. 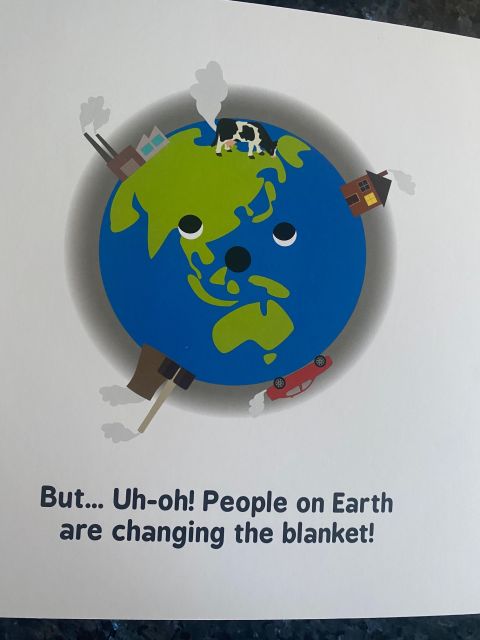 Again, this is a gross distortion meant to scare. By the way what is that cow doing grazing on the arctic circle? 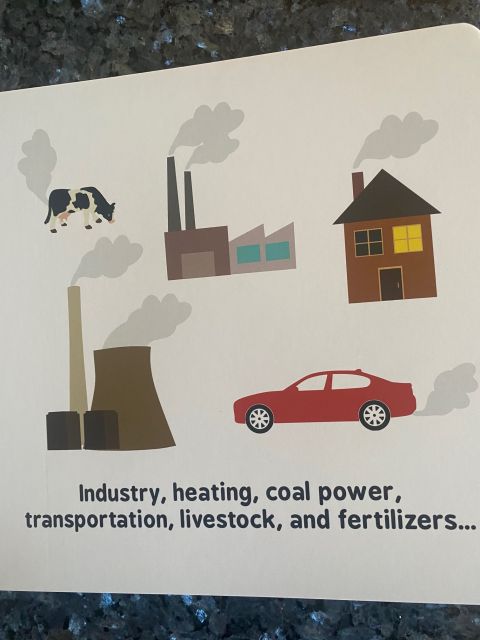 All the progress humans have made that is giving these little ones a chance for a better life gets trashed. 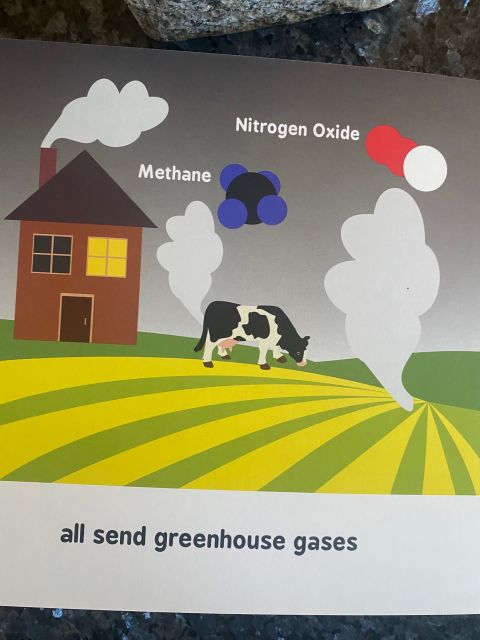 Again remember the distortion of the chart at the start. 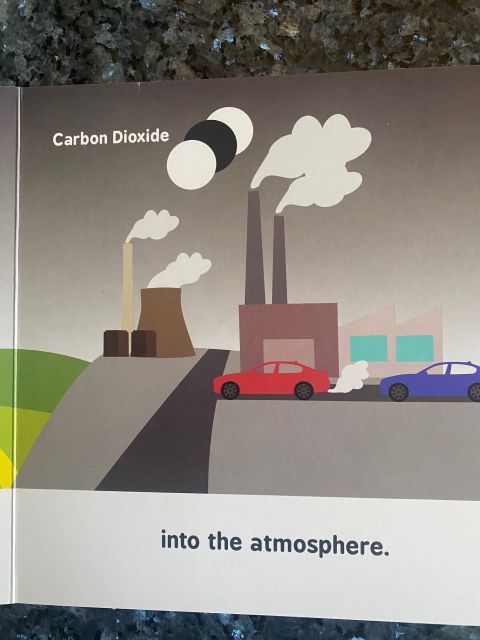 That’s right and so the earth is greener than it’s ever been because plants use that to grow. CO2 also causes them to be more drought/sheat resistant. I wonder who could have possibly designed that? So we have more food to feed people. Which of course would be against what Degrowth Marxism is pushing.

“The data, which compared satellite images from the mid-1990s taken by Boston University and those collected from two NASA satellites orbiting the earth for 20 years, showed that both China and India are leading the way in the greening of the globe.

Chi Chen of the Department of Earth and Environment at Boston University, lead author of the study, said that the two countries “account for one-third of the greening, but contain only 9 percent of the planet’s land area covered in vegetation.”

This goes hand in hand with something I have been pushing and is verified every year by CO2 decrease in the summer. PLANT MORE TREES! Use nature to help nature, not destroy hope for kids. We hear sitting members of congress come out and claim the earth is ending in 12 years (now down to 10), when man is making progress and the solutions are there even if this is a phony problem.

Do you see the drop-off?  Why not show kids and whoever is reading this, a true GREEN SOLUTION?  Why, because the twisting and hiding of truth are needed and it has gone from colleges where this Degrowth Marxism started in the 70’s, right down to toddlers. And if one wants to take a step further, into the womb with the elimination of a child before it even has a chance. Absent that, might as well start scaring them as soon as possible so their fear leads to dysfunction and chaos that destroys freedom. ITS ALL LINKED.

Here we go with the “thicker blanket” when the true argument is over the radiative properties. The increase of CO2 is so minute relative to the blanket. As I demonstrated above, it has no effect at this time. If it did why is the lapse rate not changing? Argue back radiation if you must, you have my ear, but this is simply nonsense. Unless the WMO is going to come out and tell us lapse rates are changing, meaning the increased density is affecting the buoyancy of the air. Does anyone want to push that?  I am sure neither author has any idea of what drives the weather. 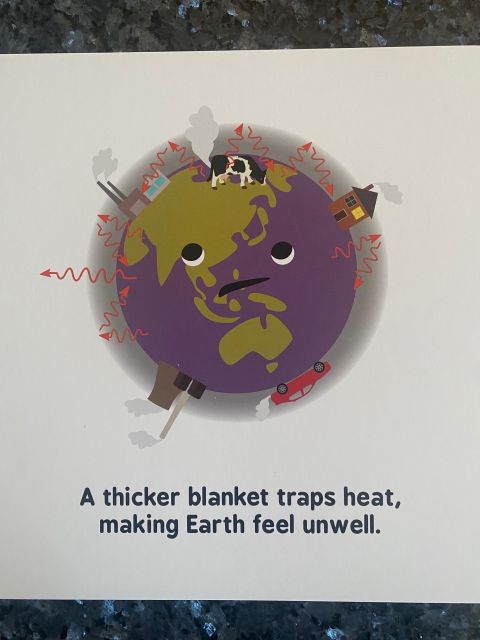 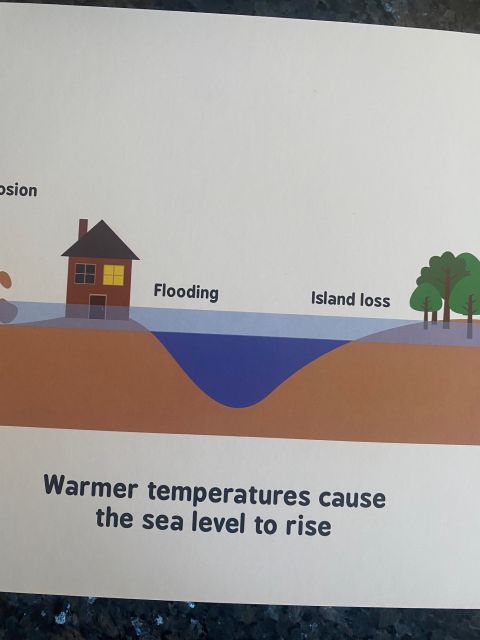 The rate of increase is the same as in the 1800’s.  Slow enough to adapt and noticeable enough to be dead wrong as in the case of the Maldives where islands that were supposed to be underwater are instead having construction. Why would lenders lend money for coastal development if this were a problem?  By the way the increase in the volume IS GREATER over the last 100 years, but the dirty little secret is the higher the sea level, the more increase in volume it takes to produce a rise. Like so much in nature and in line with Le Chatelier’s (which I notice is not mentioned by our authors) “nature adapts and so do men,”  if they are not shackled with Degrowth Marxist propaganda. Let’s call this what it is. And I wish some of our political leaders would start addressing it that way rather than the lip service they pay as if it is just another issue. It is not. It’s THE ISSUE and I am not talking about the scientific argument over how much if any change in the global temperature CO2 may or may not cause, but the destruction of our very way of life.

For the scientists on the other side and the authors here, just how do you think you would even be where you are today without the advances made possible by our way of life and the energy that drives it. In some ways, it’s a case of mass ingratitude.

There is no evidence extreme weather is increasing and in fact, the decrease in zonal potential energy because of the distorted warming is leading to the opposite in many cases. I have shown so many counters to this over the years. Roger Pielke Jr., who hardly agrees with me on a lot of the warming ideas (he certainly believes man is adding to it) is honest enough in his studies to show it, so he is demonized for it. 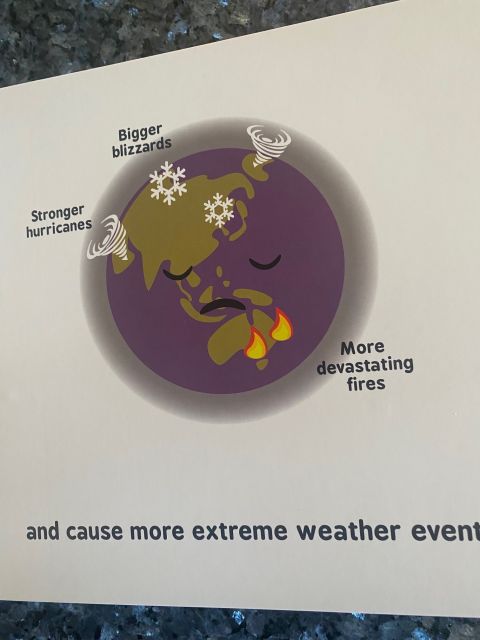 In 1930 there was 1/4 the number of people on the planet, but 28x more climate/weather-related deaths. Again, we adapt. But we do stupid things, like thinking with that increase in people and property is not going to mean each weather event worth its salt wont be more costly. Even now, what Biden has done to the supply chain means more misery with lesser events. I have spoken on this in other pieces.

So to the authors. Would you rather have been coming into the world in 1930 or now? Why don’t you point that out to the people you seek to scare?

Also, what are the tornadoes doing in the arctic and the stronger hurricane in Saudi Arabia? Must have the same illustrator as the inept one that did Al Gores, with his anti-cyclonic NHEM hurricanes.

So here is the pitch: 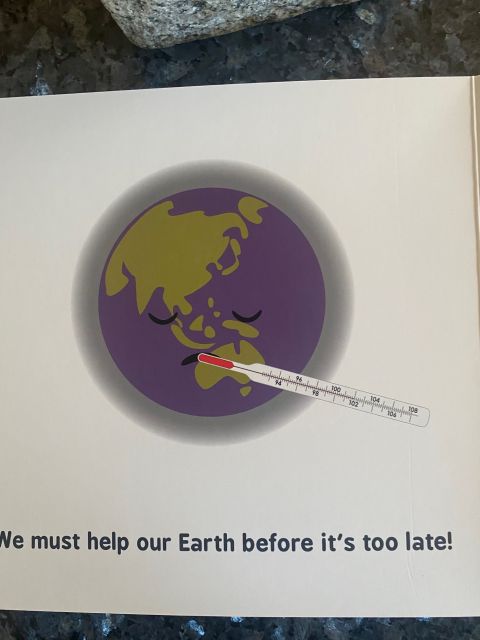 And since babies can’t read, who is getting this message?: 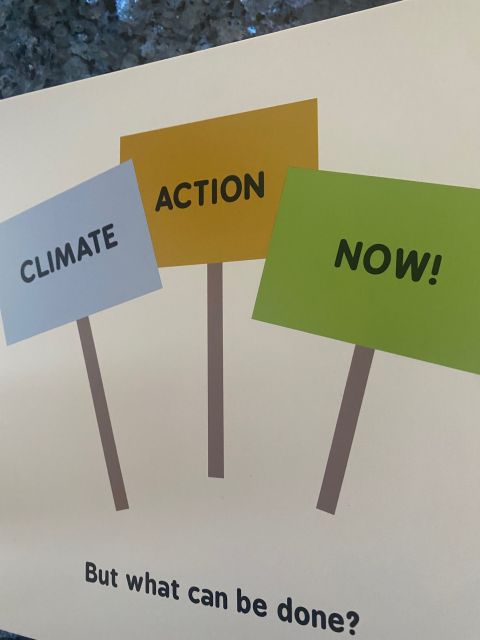 This is yet another example of what is a linkage today of one-sided arguments. My summary of this is the same as many. If truth is noble, what is hiding the truth or distorting it (for those that believe in our heavenly father, if the truth is a trait of God, what is hiding or distorting it a trait of)? But this shows how crazy it has become. They want to scare the daylights out of kids. Its a form of abuse. They want to confuse kids as early as possible. This has nothing to do with science and weather. It has everything to do with the filtering down of a philosophy that the way to save humanity from itself is to do away with the very tenets that drive humans to be better, to freedom, hope, joy. And limiting not only what people can do, but how many people there are to do it. The fact that it is reaching down all the way to this level should alarm any objective, rational person, no matter what your feeling on the “science”.

I CAN’T BELIEVE THE WEATHER AND CLIMATE HAVE BEEN DRAGGED INTO THIS SEWER. Is there nothing they won’t touch?