At the end of August, I penned this article.

Stated in this blog:

“….But it does not mean the season is over.  Though these severe anomalies may persist once into the fall, there is natural cooling of the temperature in the north, and the tropics stay warm. We may still see the frenzy. In fact, the European 30-day precipitation forecast for mid-September – mid-October looks almost identical to the years Florida is typically hit later in the season. See below…” 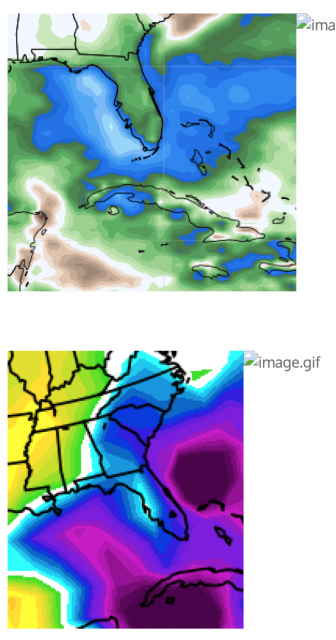 Well, its game on with the frenzy. Earl, then Fiona, were west of where Danielle developed. Now the time is ripe for a classic late seasonal storm to come up out of the Caribbean next week, likely to become a major hurricane. And because it is starting to develop quicker relative to the US—larger and more impressive on my power and impact scale where SIZE MATTERS—it looks to aim at some of the red states in the southeast. My biggest concern 10 days out: Florida.

If it were 2017, when the economy was humming along and we had a president that did not view a red state like Florida home to troublesome MAGA republicans led by an evil governor, it might be a different story. But this current administration has created such an economic beatdown—and I wrote about this in the pre-season—that it ups the ante if even a minimal hurricane hits. Joe Biden has made Weather great again because nailing a forecast like this would be a big deal. Expect him to turn around and blame climate change while the red states that are hit struggle to come back—this is almost certainly a gimmie.

The point is, it will take pre-planning well in advance of 5 days to get ready for a major hurricane. I am impressed with the parameters here. I might be guilty of trying to drive home my point in the above blog. But as I mentioned, I’ve learned much by being corrected by the weather and the conclusion of the blog was this, “ain’t over”, it’s still coming. Well, I strongly believe it’s coming anyway. I work for the company that called Sandy and the Texas Freeze 10-days in advance (but nevertheless got labeled as a fringe meteorologist). What many don’t understand is that solid results demand extreme commitment. So while only God knows tomorrow, it seems the weather is turning in a fashion I am worried about. And even after this, I do not believe its over as the areas from the eastern Gulf up the east coast may not be done. Hazel hit Oct 15th and Oct 30th. Both storms were legendary.

But I got alarmed when I saw people blaming Fiona on climate change, especially when what was most remarkable was how long it took for an African wave at the height of the season to develop (it was like Hillary with hers).  Weaponization of Hermine in 2016 was deplorable, which inspired a chapter in my first book and the follow-up with the second. The heavy rains on Puerto Rico were because of slow motion due to the WEAKNESS of the subtropical ridge to the north, not because rainfall rates were out of the ordinary for a tropical cyclone. Same thing with Harvey. The band STALLED OVER HOUSTON BECAUSE IT WAS TRAPPED BY A COLD TROUGH! And it was the very slow movement because of the cold trough. So I know what they are going to do. They went nuts with the well forecasted (from over a week out) super typhoon in Japan that I believe killed less than 50 people. Typhoon Vera in 1959 killed 5,000 people. Even if you want to make the argument that this typhoon was stronger, apparently, we have adapted so well that the loss of life went down overall. But the West Pacific is well below average this year, but that does not stop the meteo misinformation media from pushing their phony climate war agenda. Whatever happens, climate change will be blamed. And if it hits Florida, no matter what Governor DeSantis does, he will be hammered as a climate denier and the cause of the misery. That’s what they do.

And now here we go. The phony climate war has us open to what 5 years ago would have been a major problem, and now requires a much quicker response. Maybe Joe Biden will read this and, to impress voters, get out in front of it. So is it Lunch Pail Joe or Mussolini Joe as I saw in Philadelphia, that will respond? But governor DeSantis cannot wait for that. Given what they will try to do to him if I am right, and because he loves his state, he should start planning now. When we get to 5 days out, the national hurricane center (NHC) is king with a storm like this. I suspect, just as I did in the Texas freeze, there are guys in the field worried about the same thing I am but can’t come out and say it. Believe me, there are some really, really, really good people in there. Well, I can come out and say these things, especially as I fight with less baggage.

You know they say that 60 is the new 40 (that’s what I am saying in bodybuilding, haha). Well, when it comes to a response to hurricanes with what has happened to this country, I suspect, 2022 may be more like the 1950’s. It took me 18 weeks to get a window for my bathroom when 3 years ago it took 3 weeks. What happens when countless windows are blown out in a hurricane? Never mind windows, think of everything else.

The math is not hard to do. But let us hope I am wrong regarding this upcoming storm and my concerns about the rest of the season.

It’s the contradiction I wrestle with constantly, particularly as a lover of challenging weather. The desire to get out in front and do what I was made to do motivates me, especially when I consider the misery that might happen if I shut up and what would result if I am right. You don’t know the countless hours I have spent wrestling with that. But who knows, maybe I can hit the forecast and help mitigate the result. In my view, it is worth the try.