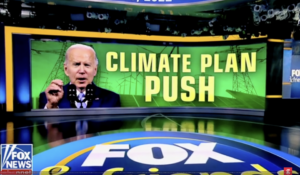 Rachel Campos-Duffy: President Joe Biden pledging $150 million to advance Africa’s resilience to climate change. This, despite 146 million people across the country going hungry. ClimateDepot.com publisher, and author of the Great Reset, Global Elites and the Permanent Lockdown, Marc Morano joins us now. Always great to have you on. 34 million Africans are in danger of famine right now. Why are they offering money for climate policies and initiatives and not food?
Marc Morano: This is an incredible situation. The UN has it completely backward. Instead of looking at all the problems in the world, and saying we need more food production, we need high-yield agriculture, they look at it, say we need to stop ‘climate change’. This whole agenda has harmed Africa, first of all through COVID policy.
Rachel: Yes.
Morano: Chiefly occurring through Covid lockdowns which by the way, the World Health Organization was at the UN summit, the World Economic Forum was at the U.N. climate summit where Biden was. They’re pushing more responses to climate as the same template as COVID, essentially bypassing democracy. What the Biden Administration is done, allowing this to happen in Africa. We’ve seen it in the Netherlands. They’re collapsing modern high-yield agriculture, doing it in Australia, Canada. Making food more expensive, creating shortages. Doing the same thing in transportation and doing the same thing in energy, all in the name of climate change.
This is backward policy. Unfortunately more of an example of the western wealthy nations harming Africa by not letting Africa develop fossil fuels to get energy and prosperity like the west.
Rachel: Seems like they’re holding Africa hostage. They’re basically saying you have to take on these climate policies. Enough to lock down, you have to vaccinate. All these things they ask them to do in order to get the aid, is that what is happening?
Marc Morano:  We’ve seen this happen in previous administrations. The Obama Administration, the World Bank has not helped Africa with loans unless they commit to not building fossil fuel plants. There is a delegation of African nations at this U.N. summit in Egypt which I just got back from, begging, pleading with the United Nations they are going to develop fossil fuels, because that is what their people in Africa need.
The wealthy western nations tell them, you can’t make the same mistakes we did with fossil fuels. What mistakes were those? Long life, lower infant mortality, prosperity and cleaner environments as you get wealthier? There are no mistakes when you develop like that.
Rachel: So Marc, during COVID we saw the introduction of these very creepy Chinese-style surveillance tracking apps. Al Gore is at this conference peddling a climate-tracking app. Tell us about that?
Marc Morano:  This is called Climate Trace. Keep in mind, humans, we inhale oxygen, we exhale carbon dioxide. Potentially, Al Gore’s app — partnering with Google could monitor human breath. It is going after farms, energy plants, anything in the energy sector, and fossil fuels. The idea is to help the UN enforce climate regulations. This is a scary development from this summit.
Rachel: Marc quickly, does the summit, all the initiatives they’re pushing the tracking app is it about the environment or about the great reset in population control?
Marc Morano: This is all about increasing their power, imposing their vision and their vision is population control, economic control, and basic civil liberties control of every human on the earth. That is really what this conference is about. That is what the United Nations teaming up with the World Economic Forum is all about.
Rachel: Thank you for synthesizing it down. A lot of people wonder why are they doing this. Why are they impoverishing people? Why are they hurting Africa. You gave us the answer. Marc, thank you so much for joining us.
Morano: Thank you, Rachel.