Bringing climate change into the Syria issue does a great disservice to the innocent victims of that tragic conflict. Civil war in Syria is about people seeking to rid themselves of a bloody tyrant. Sadly, it has been exploited by religious fanatics whose endgame does not include benign democracy under rule of law. 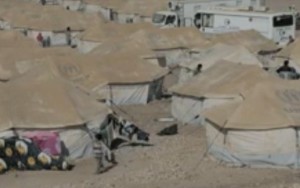 There has been no meaningful global warming since the late nineties and not very much before that. UN IPCC computer models project significant global warming in the future. So far those models have severely over-estimated warming. The tyrant in Damascus, the fanatics seeking to establish a theocracy and certainly not the many Syrians who yearn to live in peace and freedom have not taken up arms because of what the computer models say in an IPCC assessment report.

In 1933 Syrians actually banned yo-yos when religious leaders proclaimed that the up and down action interfered with people’s prayers for rain. Anyone linking global warming to today’s upheaval in Syria follows in that tradition.

As President Obama has learned, the human calamity in Syria does not yield to easy solutions. Putting on a pair of climate blinders is the last thing we should do if we truly care about the suffering of the innocent in Syria.

This originally appeared at National Journal.