Climate fight cuts at the very heart of American exceptionalism

The Climate Fight has exposed the underlying agenda that drives it, a direct challenge to the idea of American Exceptionalism, While it has become more obvious with the statements that are being made that this is more about the economy, than actual weather and climate it is also about the limiting of free exchange of ideas, Quite frankly for anyone that has read Saul Alinksy’s rules for radicals, the tactics of isolate, demonize and destroy pushed in the book, are coming to the forefront. Those ideas have been used with increasing frequency now in the climate debate, where those that dare to stand against the idea that man is destroying the climate are demonized and destroyed,

1) it seeks to destroy the economic lifeline of the country, in a way that would make Cloward-Piven proud, ending American Exceptionalism

2) It attacks freedom of speech and thought. Again, Isolate demonize and destroy along the lines of Alinsky’s rules for radicals

One only need look objectively at what has been said to understand this, you want to see what some of the people that hare driving this have said, check this link, It is downright scary

There is no better example of this than what just recently occurred in Forbes, , A classic example was the shutting down of Israeli Astrophysicists Nir Shavivs great piece on the sun’s role in all this ( imagine that the sun having some effect on the climate) 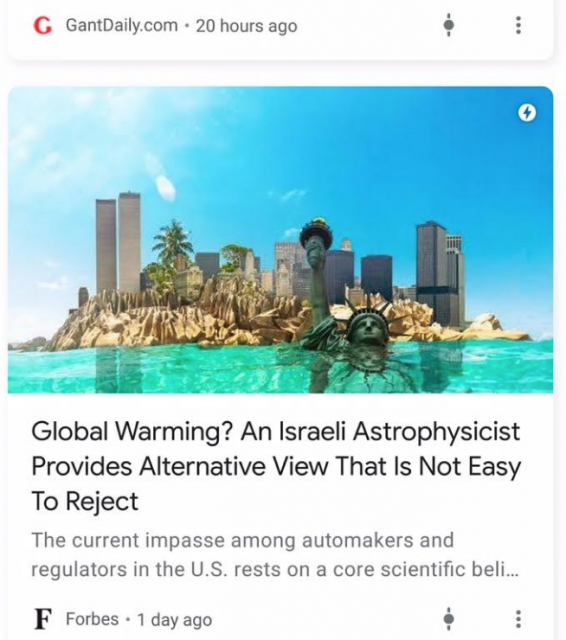 Which was then taken down and replaced by this! 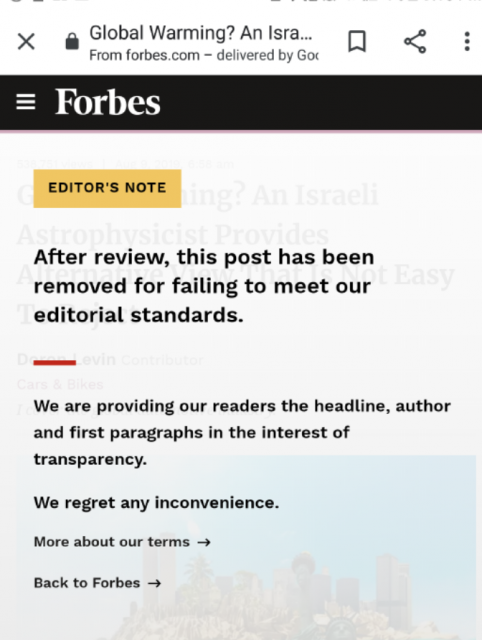 Here is the Nir’s rebuttal

This is amazing to me, Here is a well-respected man that works right in the alley of his expertise and he gets embarrassed like this? Exactly who got to Forbes and why did they simply not get on a conference call with the people trashing him and with Nir himself, to say why he has a rational and sound position? Instead, we have censorship,

No one knows better than one of the worlds premier Astrophysicists Dr. Willie Soon about things like this

Recently, this CFACT article on my part, which was forecasting not only the heat that was coming but the predictable hysteria

This was written in mid July, in a summer that for much fo the nation through mid July was uneventful so it predated the extreme heat

was followed up with this on social media search engines 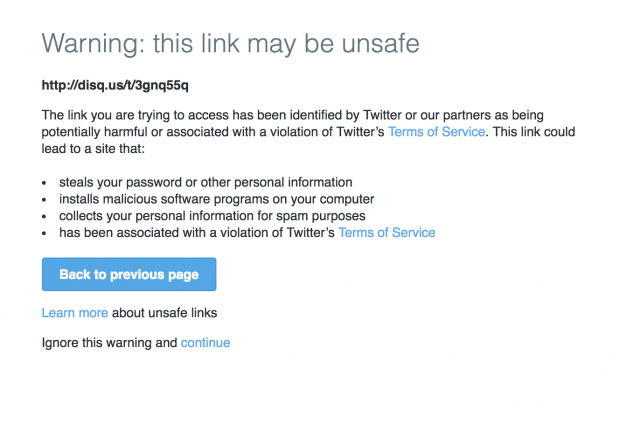 But here is my point. The latest step in the isolate demonize and destroy involves shutting down any dissent against the “consensus” But it also becomes insulting to the Ph.D.’s, much more so than me, because it questions their Ph.D. How is a Ph.D. in meteorology like Dr Richard Lindzen or Dr Roy Spencer, with their pedigree, or Will Happer with his background, somehow so non-intelligent they can’t see that the increase of co2 is, despite life on planet earth being better than ever, is about to lead to a climate catastrophe Or the geologists that are demonized because they are not on board. Its also targetting the heart of their life and livelihood by demeaning, in essence, their PHD’s. And the media gladly jumps on board, not stopping to think for a second that the very fact you have many very smart people ( there were over 300 in attendance in my talk, and I was certainly the dumbest man in the room) isn’t enough to say, “heh wait a minute, this is not water or gravity we are arguing over but a majestic system that through the years has never been controlled by man” . And therein lies what is looking more like the key to what is really driving this, 2 quotes by HL Mencken sum it up

The whole aim of practical politics is to keep the populace alarmed (and hence clamorous to be led to safety) by menacing it with an endless series of hobgoblins, all of them imaginary….The urge to save humanity is almost always a false front for the urge to rule..

HL Mencken BTW was a democrat, but these quotes were made near o just after Woodrow Wilson was in office> Wilson in some circles is the father of American “progressive” politics

But the very fact that the sun is linked to changes in the MJO, a major driver of weather and climate, makes Nir’s ideas at least open for debate in the larger sense.

For those wanting to dig in on that, here is a link

But there is a predictable weaponization of the weather,  from heatwaves to hurricanes,  I dealt with the hurricane aspect at the Heartland confernce and a previous article here on CFACT

You can see the talk here

There are people on the other side of the issue that I believe ARE being motivated by the search for the answer, My difference with them is attribution, The input of man is one of many things that make up the climate and in forecasting, you learn how to weight the variables needed. Being wrong is a huge teacher, but given climate models so severely overestimating warming, you would think that someone would learn from that.

This article, by another target of AGW agenda wrath, Dr. Roy Spencer is a nice summation of that

But it becomes almost dangerous for people on the other side of the issue to even associate or give any credit to a person that does not agree with them, for they face the wrath of the climate machine. I am exactly opposite of that, I have grown grateful talking to people with those ideas, That has earned me some angst from people on my side of the issue, but I WANT TO SEE WHAT THEY BELIEVE AND WHY. You don’t get better by not improving on what challenges you, so you embrace it, not avoid it, My take is because they are so focused on what they believe, it can leave them unable to accept any challenge to their authority, Remember the crack above about being the dumbest man in the room? Well if you want to learn, that is the way to be since you will then look at anything and everything to come up with the right answer, but if you are just focused on one thing that you have worked 30 years on and believe you are right, well its the opposite. But in spite of the demonization, there are honest brokers on the other side of the issue, Not the people who are censoring it, Afterall is you are so right, what are you afraid of, unless you have another motivation

The fact is the experience of the older Lions is being trashed today in an effort to replace our way of life. But isn’t that not what we are seeing across the board? The biggest example, the trashing of the founding fathers in an effort to destroy the foundational base of American Exceptionalism and the freedoms that have enabled us to get where we are, the constitution. But you can see the linkage on every major item, Instead of using our founders as a bedrock to build and improve on, they look at their weaknesses through the prism of 250 years, and try to turn it into quicksand. That is arrogance pure and simple, thinking you would have done better, But that too involves the second part of this, Isolate demonize and destroy, straight out Alinsky, But they make no secret of that, just like chapter 3 of my book, the Climate Chronicles, talks about the weaponization of weather has become prophetic as we see them screaming about every event they can find, as if the planet is going to be normal every day ( no one knows that that is anyway But hey are out there for all to see as they sense no matter what and by any means necessary, t, a socialist wave has to overwhelm the US. They have worked too long and too hard to turn back now with the 30 years of climate change missive and a younger audience intolerant of older views, the stage is set

Maybe like Jackson, Maine sings in ” A Star is Born”, ” Maybe its time to let the old ways die”

But I look at it differently and would advise all in this debate pro or con, to try to adapt the words of Abe Lincoln, It is so important to me keeping me focused that its a stand-alone page in my book

It’s only by adapting that can you truly pursue the correct answer, in what amazingly to me, has become the center of an attempt at social and economic upheaval and as the title implied the ending of American Exceptionalism