So let’s look at this quote:

“Ali, anyone who questions extreme weather and climate change is just delusional at this point,” Cuomo told MSNBC anchor Ali Velshi. ” We have seen in the State of New York and we have seen — it is something we never had before.”

“We didn’t have hurricanes or superstorms or tornadoes,” Cuomo added.

It is mind-boggling to me that a sitting Governor of a coastal state would say they did not have hurricanes before, when his own state was hit in 1821 by a category 3 hurricane all the way to what is now JFK Airport (A similar path with Irene in 2011 weakened to a tropical storm by JFK airport) And 1938 , which wiped out and would do so again, buildings on the east end of Long Island. As far as “Superstorms” though it was still classified as a CATEGORY 4 HURRICANE AT LANDFALL IN MID OCTOBER. 1954, Hazel had winds just as high as Sandy all the way into the northeast and even much higher inland, THERE WERE HURRICANE FORCE WINDS ALL THE WAY TO TORONTO! Let’s see, if the governor would look at a map he would find New York State lies between Toronto and the South Carolina Coast.

To help the Governor, here is a picture of tropical cyclone tracks since the 1800’s. 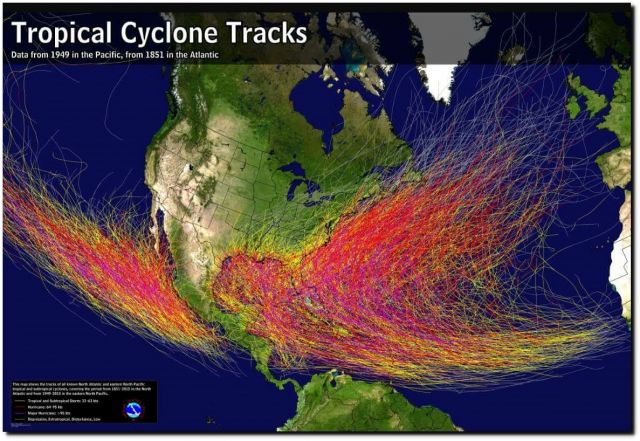 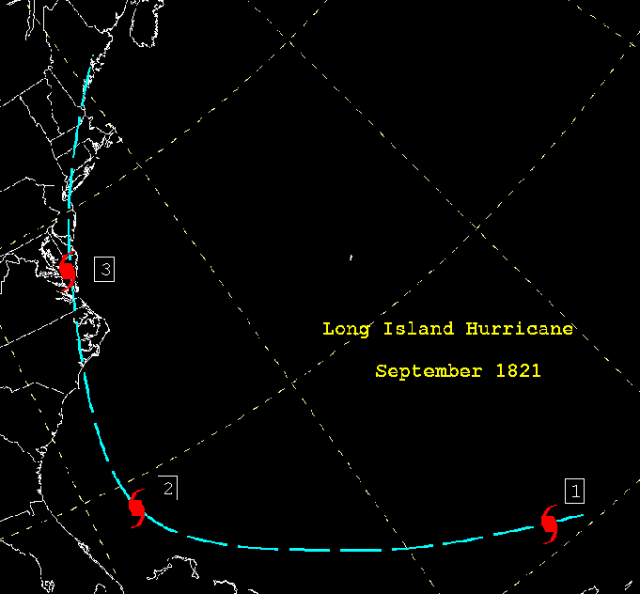 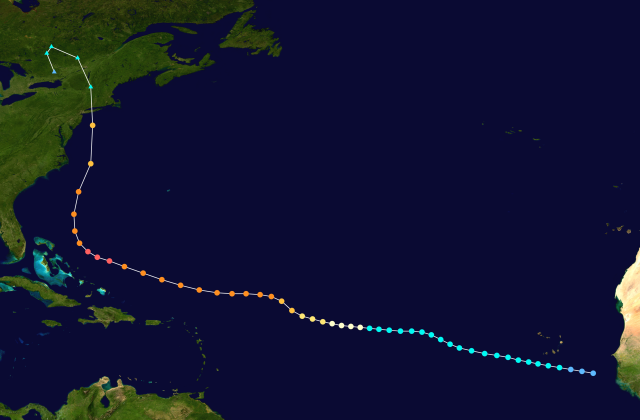 By the way where was he in 1972 when post tropical cyclone Agnes devastated PA and the southern tier of New York with floods far worse than what was seen last week.

And the railroad track of major hurricanes on the east coast 1954-1960. 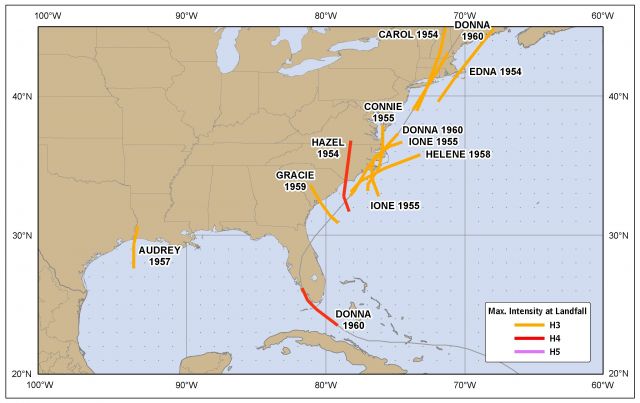 Nothing has come close since for frequency and intensity of landfall on the east coast.

I was speaking Wednesday to a group of very successful people, most younger than I. The fact is most did not know how bad the weather used to be, they had no idea that in the 1940s 8 major hurricanes crossed southern Florida, or between 1954 and 1960, 8 major hurricanes ran the east coast, including 2 hitting within 11 days of each other in New England (Carol and Edna, 1954) The same year as the aforementioned Hazel. Can you imagine that, 3 major hurricanes on the east coast in 1 year?

BTW, the non-tropical storm in late  November 1950 had HIGHER WINDS THAN THE SO-CALLED SUPERSTORM SANDY (IMO it was still a hurricane, and the northeast was hit by one.  All storms reaching the NE start losing pure tropical characteristics.  Once classified we should leave it until it dies.  We get into these arguments that are fit for a classroom but only cause confusion in messaging). In the Tri State and throughout the east, several, highest wind ever records were set with that storm.

Sustained winds of 50-60 mph (80–100 km/h) with gusts to 83 miles per hour (134 km/h) were recorded at Albany, New York. A wind gust of 94 miles per hour (151 km/h) was recorded in New York City. Extensive damage was caused by the wind across New York, including massive tree fall and power outages.[7] Coastal flooding breached dikes at LaGuardia Airport, flooding the runways.[8] Flooding extended to New York City’s Office of Emergency Management on the Lower East Side, in Manhattan.[9]

Washington DC reported sustained winds to 78 mph while peak gusts to over 90 mph were reported far to the north in New York state. In New York City, a peak gust of 113 mph was recorded at the Battery at the south end of Manhattan.

So either the governor does not know these things or he does and is being deceptive of the facts.

I can go on and on. He should look at the history of New York Tornadoes, and floods. Again, most people do not know, so he says these things and trusting people believe him. Who has the time to research if you are trying to make ends meet?

Now to Bette Midler and her rant on Wildfires:

WITH WILDFIRES RAGING ALL OVER CALIFORNIA, HOW CAN ANY AUTOMAKER BE SO COWARDLY AS TO NOT STAND UP FOR LESS CO2 RATHER THAN MORE? WHY BACK A CLIMATE DENIER AND MORON?

Since 1980 wildfires have been on the upswing. 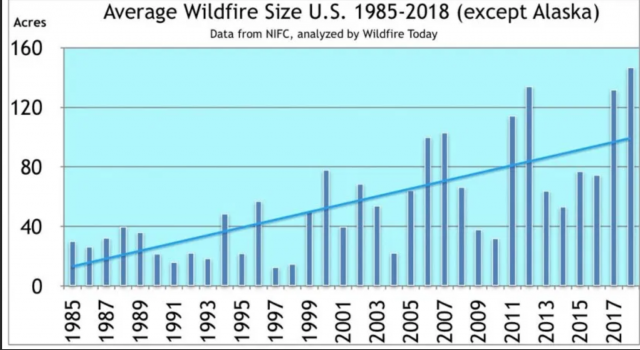 However, they are nowhere near where they used to be 100 years ago and they conveniently start the graphic where the increase started.

In addition, this year is well below the running 10 year average in both numbers of fires and acres burned! 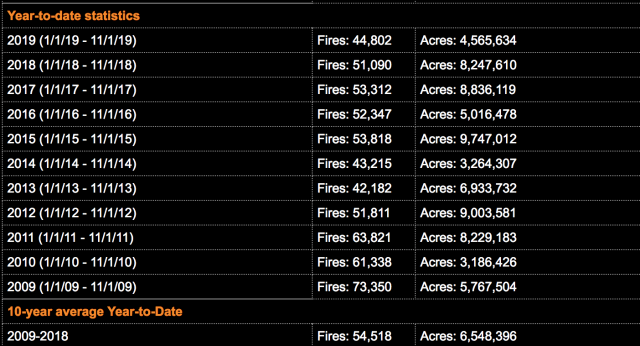 But if something bad shows up, leave to the agenda-driven people to make it seems like the worst ever. No one in the mainstream media bothers to look and challenge anymore. So a willing public sees it, believes it, as yet again if they don’t look, they don’t know. So the Divine Miss M (believe me, this kills me, I love her music) either does not know or she does and is simply so much of means justify the ends person that she will say these things,

But look at it this way, the weather has a way of bringing people together. The evidence clearly shows the Governor and Bette Midler have this in common. They either don’t know what happened before, or they do and simply don’t care because it doesn’t fit what they are pushing, So the reader is left to look at the facts and decide which is worse. Either way, the facts are not kept in the proper perspective by people pushing this.

Bottom line, be afraid, be very afraid.. Not of the climate and weather, it is no different than it has been and man’s progress is leading to adaptation, but of the people seeking to use climate as a means to an end. That is what will limit the very progress we need to continue to grow and prosper as a society,