Over the weekend CFACT posted an important editorial to Facebook.  It is from The New York Post and explains what happened when Facebook “fact checkers” suppressed questions about China’s veracity about the origins of the Coronavirus.

Way back on Feb. 23, The Post ran an opinion piece by Steven Mosher saying that we couldn’t trust China’s story about the origins of COVID-19. He argued that the virus might — might — have jumped to the human population thanks to errors at a Chinese laboratory in Wuhan, rather than via that city’s now-notorious “wet market.”

The piece was widely read online — until Facebook stepped in.

The social media giant’s “fact checkers” decided this was not a valid opinion. If you tried to share Mosher’s column on Face­book, the social network stuck a “False Information” alert on top, saying that finding was “checked by independent fact-checkers” and preventing your friends from clicking to connect to the original article to see for themselves.

CFACT’s Facebook friends realized the importance of the piece and stepped up.  As of right now 592 of you clicked “share” to make sure your friends saw it, 462 of you clicked “like” and 41 of you took the time to comment.  The result?  Only 6,935 of our combined friends actually got to see this post when they logged into FB.  That’s a share ratio of only 11.7 to one.  Simply put, for every one of you who shared this post on Facebook, a little less than only 12 of your friends got to see it. 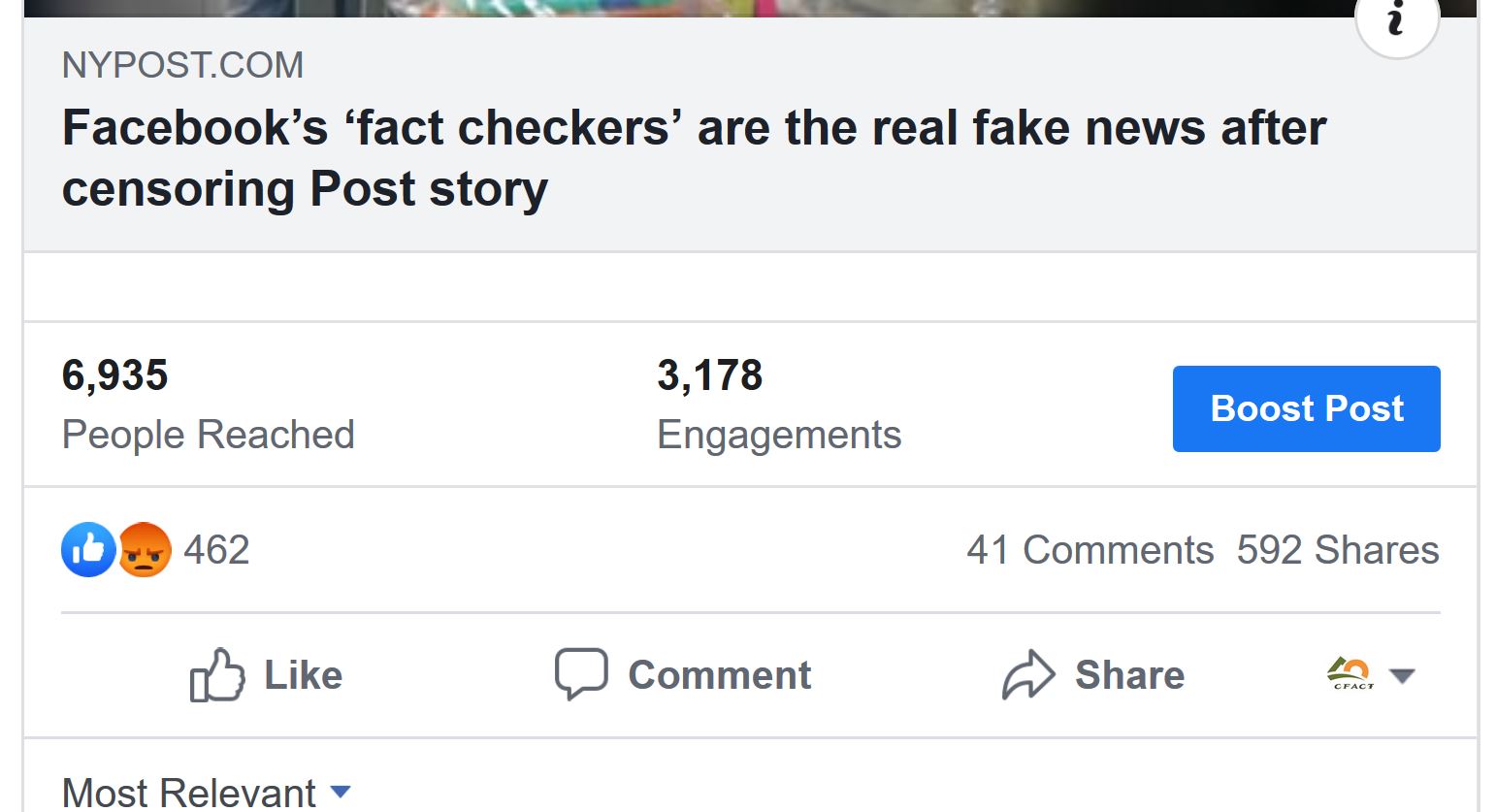 For comparison, that same day we shared a serious CFACT post about narrowing the economic recovery curve — share ratio 66.We posted a cute joke about a cat and dog expressing their opinions about the virus lock down — share ratio 73.4.

That’s how online virality works.  It empowers individual readers to determine which stories bubble up to the top and are widely viewed.

When you shared The NY Post editorial, Facebook’s algorithm stepped on it to ensure that few of your friends got to see it.  This resulted in fewer of them in turn sharing it, and so on.  That’s how opinion suppression works.

Facebook recently, whether wittingly, or as manipulated by the Left, pulled its censorship trick on Dr. Jay Lehr, who contributes opinion pieces to CFACT.org.  One thing we know for certain is that the Left does not labor under the same “fact-checked” constraints. 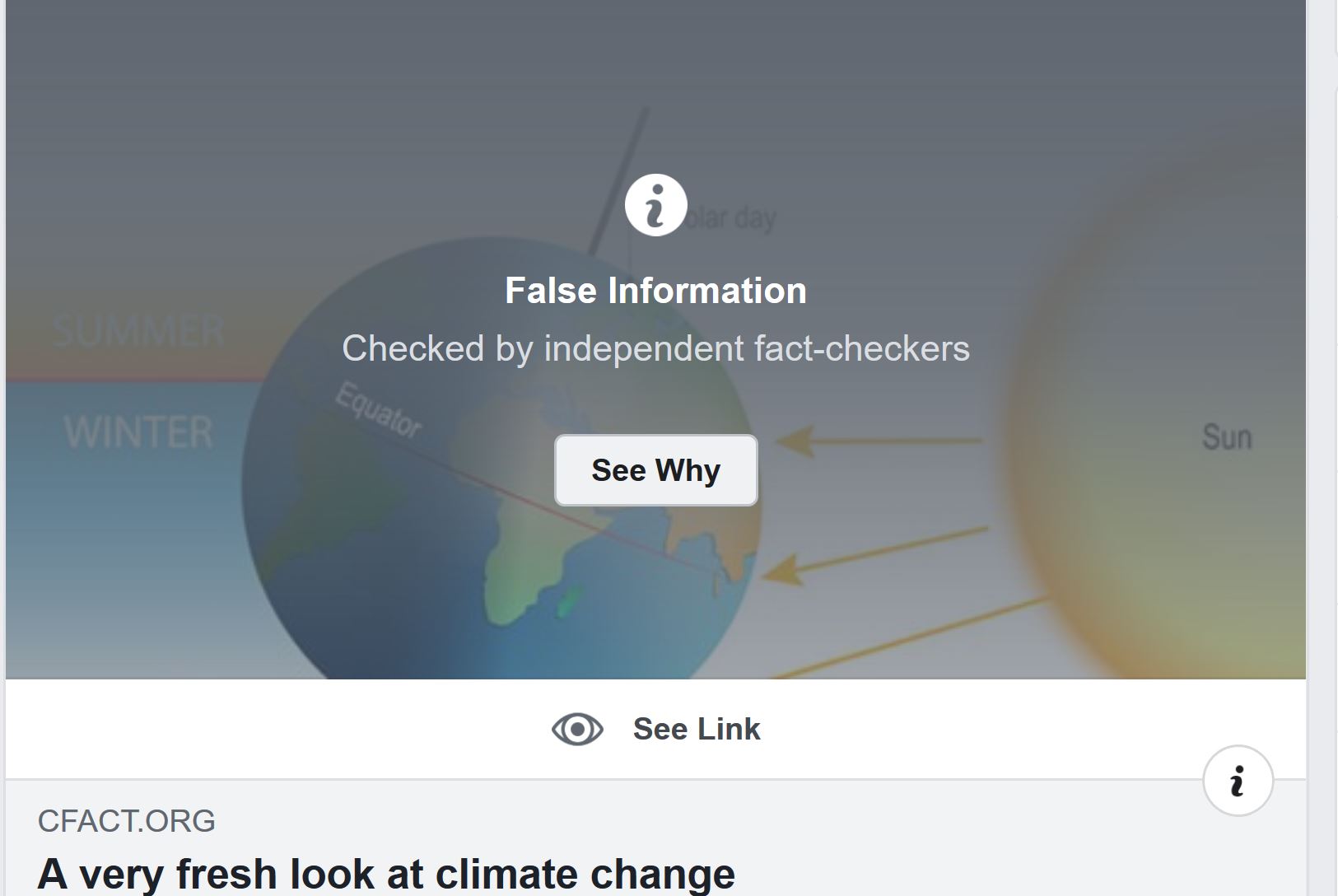 In a piece entitled “A very fresh look at climate change,” Dr. Lehr discussed the role the sun and other factors play in the climate.  Climate campaigners used Facebook’s tools to report Dr. Lehr’s article.  As a result Facebook reduced the number of people who saw the article.  It put the words” false information” over the picture of the Earth that illustrates the article and linked to a supposed “fact check” article which states, “anthropogenic increases in greenhouse gas emissions account for 100% of the rapid global warming trends observed after 1950.”

One hundred percent?  No questions may be asked?  No other facts considered?

Should Dr. Lehr recant as Galileo was forced to recant his heretical notion that the Earth orbits the sun?  “E pur si muove!” Galileo replied according to legend.  “And yet it does move!”

Climate science cannot attribute today’s incredibly complex climate “100 percent” to CO2, methane, solar radiation, cloud formations, planetary oscillations, or other factors.  Claiming 100 percent influence is foolish.  The UN IPCC doesn’t even try to go there.  Making such an exaggerated claim in a “fact check” is nothing more than an attempt to stifle questioning and suppress debate.  That’s not how the scientific method operates.

We also know with certainty that when researchers of the high-caliber of Dr. Jay Lehr express their opinion they are often right, occasionally mistaken, but always sincere and seeking truth.  We  know with equal certainty that the global warming movement deliberately misleads the public, does so with deliberate knowledge of what they are up to, and seeks to suppress facts that challenge their pronouncements.

So-called “fact-checking” entities are dominated by the Left.  They take sides and aim to prevent the public from benefiting from a balanced and free marketplace for ideas from which to make up their own minds.

Facebook founder Mark Zuckerberg put up a Facebook post congratulating himself for his efforts to use “fact checkers” to “reduce” and discredit distribution of posts on his platform about the Coronavirus.  Facebook uses the same techniques on climate, economics, politics, and a host of other hotly debated issues.

If a piece of content contains harmful misinformation that could lead to imminent physical harm, then we’ll take it down. We’ve taken down hundreds of thousands of pieces of misinformation related to Covid-19, including theories like drinking bleach cures the virus or that physical distancing is ineffective at preventing the disease from spreading. For other misinformation, once it is rated false by fact-checkers, we reduce its distribution, apply warning labels with more context and find duplicates.

Sure Mark, we shouldn’t drink bleach, thanks for that.  Which is more likely, idiots drinking Clorox, or China using your “fact-checking” snitch link to suppress questioning about how it handled the virus?

You can’t possibly be unaware, Mark, that the Left uses control of process to stifle debate.

Is Dr. Jay Lehr’s opinion that the sun is a significant factor, and global temperature cannot be attributed 100% to fossil-fuel use so heretical that it should not be permitted to compete in the marketplace for ideas freely and unimpeded?  News flash — when the climate folks say that something is 97%, let alone 100%, that’s when you should be counting your change.

Look in the mirror Mark Zuckerberg.

The internet powers that be at the time, Google, Microsoft, Yahoo, etc. could have used a simple little suppression algorithm (like the one you’ve deployed against us).  This would have prevented people from widely finding and sharing with their friends a cute little new site called Facebook that a clever young programmer cobbled together in his Harvard dorm room.  Think about it Mark, if big tech had treated you, the way you treated the NY Post and CFACT, you’d be working for them.  You’d be making $400,000 per year as a top programmer and would have just saved up your first million — a heckuva sweet slice of the American dream, but not exactly kid billionaire.

If big tech had suppressed you Mark, as you aim to suppress us, we would not know your name.