The problem with looking at the weather so much is that when you hear comments that run counter to what you see, it brings up the old admonition, Who are you Going to Believe, Me or your Lying Eyes? Of course, bringing this up can rain hell from above with the atmospheric authoritarians.   But at the end of June,  I want to bring a few things up about the extremes of NON EXTREMES.

2) This is tongue in cheek, but suppose I want to show people how tranquil the weather is (not a good idea if you are trying to get business or attract attention) I would bring up that with no named tropical cyclones on the planet right now (midday Monday) and no likely strong feature the next several days, we are tying the all-time record for LEAST  amount of classified tropical cyclones for the date, which of course is 0 (and has occurred many times ha ha)

3) Now here is something a bit more serious. The massive shutdown this early in the prime region for most ACE/basin, the Northwest Pacific (currently less than 20% of average) is something that is a precursor in many seasons to the big Atlantic basin hurricane season. When that area is down, the Indian Ocean (which is well above average) and the Atlantic make up for it. But if we are going to think globally about how bad things are right now, there is not much to say, except the lack where it means that the forecast ideas we have had now since early March, appear to have merit. Remember that if we turn out right,  chances are other areas are well below average  The Northeast Pacific is less than 10% of average now!

4) Tornadoes are way below average. Look at the chart. 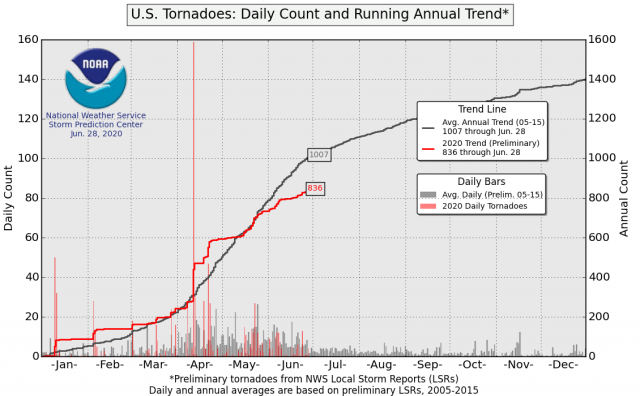 If not for the one day in April it would be at record lows. BTW that day was interesting, for there was one swath that produced over 50% of the 183 with 2 other parent cells to its southeast another 25%. 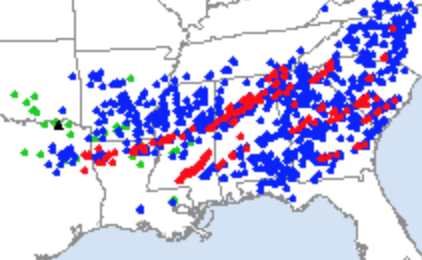 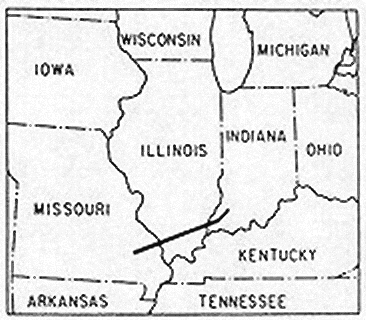 I have to wonder if under scrutiny with today’s ability to see smaller tornadoes around the large singular one, if there would have been many more tornadoes reported rather than the single path.  This was the US deadliest tornado. But back to the main point, Tornadoes are way below average.

So is Hail! In fact, it looks like it is at a record low! 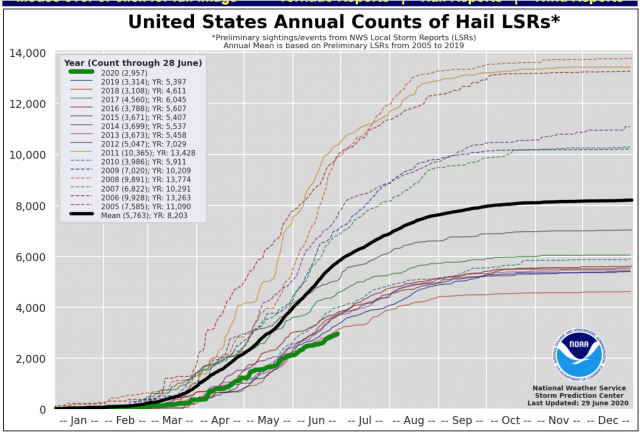 The swap is that wind reports are above average.

The reason for the lack is that too much cold air banked NW/SE through the nation at the height of the tornado season suppresses activity. You can see that here  chances are what instability is there. They do not reach the levels that produces the hail or tornadoes. Yet that threshold may be less for strong wind gusts in downdrafts. 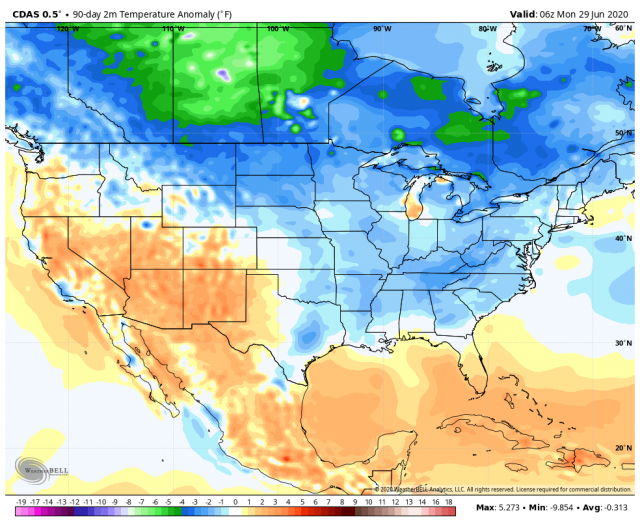 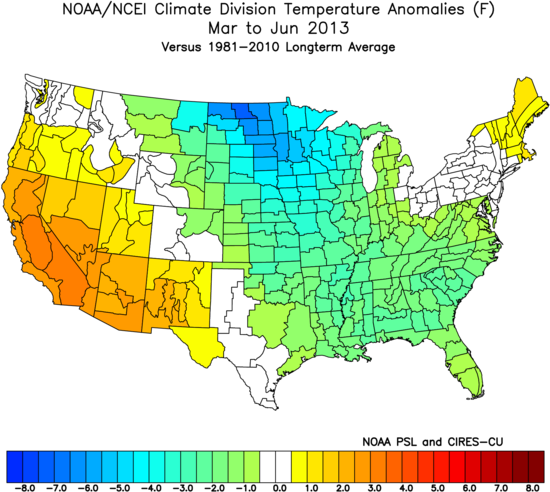 when cold air is banked up SW/NE over the west and plains hyper years result, like 2011. 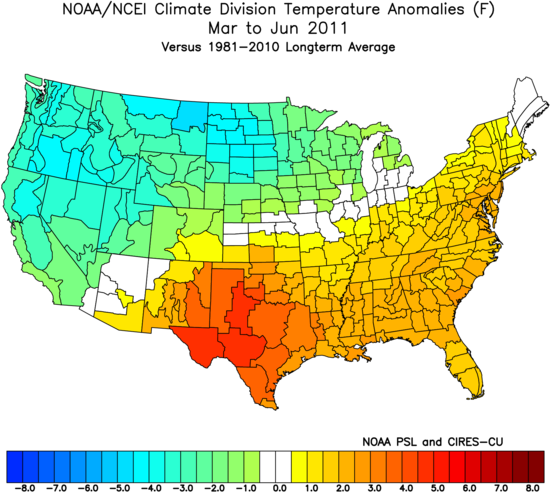 Too much warm air like 2012 and its a weak season: 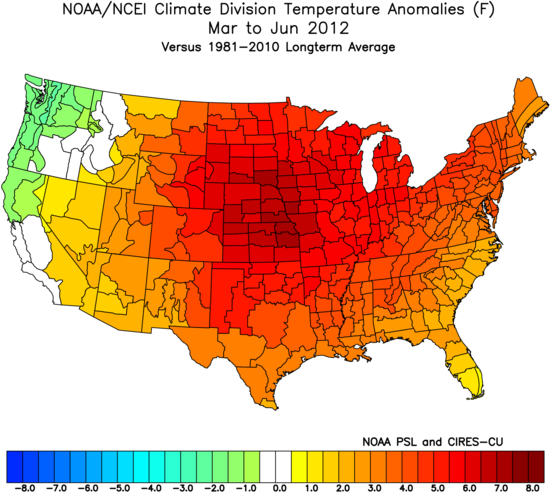 But do you see what is going on here? Noteworthy cold and warm, which can get played up as a sign of some kind of atmospheric apocalypse (any extreme counts, never let a good weather event go to waste.. not to be confused with never let a good piece of cheesecake go to your waist)  usually has some kind of compensating opposite event. One can say both are extremes,  but the average is not really normal, its an average.Look at the hail chart again. See the average? Most of those years are above or below and not by a small amount.
Nature swings to extremes and back, because weather and climate are nature’s, not mans, but nature’s way of getting rid of an imbalance she never can, because of the inherent traits of the system. That is normal for such swings to happen, just like its normal for nature to test limits.  We see it now,  we did not before.  That’s a good thing for weather nuts, since how boring is it if nothing is going on, Which of course means that since there is something happening somewhere (take the extreme heat in Siberia or the heatwave building in the lakes or Ontario). If you are a weather nut you can always find something to gawk at, or if you are a climate extremist, something to alarm people over. The problem is most people are not aware of that.

Finally, Arctic temperatures continue to exhibit the traits of oceanic induced increases in water vapor. This leads to higher dewpoints, which means given the relationship between water vapor and dew point, greater limits on how far the temperature can fall in the coldest area. It is much more pronounced in the winter when its coldest in the arctic, than the summer, when the combination of melting ice (which cools the air, as opposed to the freezing process, which releases heat) and while Water Vapor has increased, it has not yet increased enough to force the issue with summer.

So when if monster hurricanes come a calling, or a heatwave starts a boiling, or tornado is a brawling, rest assured that someplace, somewhere, nature has a counter going on. I like telling you about it cause its all part of the gift of weather. Beware when you don’t see a countering point.