The extreme of non-extremes in the tropics

All 4 tropical basins over the next 10 days with the euro not seeing any tropical storms are freaky quiet. Distortion of heat build due to warming ( more north than the south) may be ruining normal convergence. A positive result of warming? Perhaps, but fat chance that is brought up. While 6 storms have developed in the Atlantic Basin, 2 of them were in the weatherbell.com non-consequential development zone, which we labeled that way because those storms would have never been named in previous years, Yet what has hyped? 6 Atlantic tropical storms with 3 of them lasting less than 24 hours. Yet where is the playing up of the longest stretch since at least 1966, where no hurricane, typhoon intensity storm has developed and looking down the road that amazingly quiet stretch may last another week to 10 days? All the storms have been no more than tropical storms and the “ACE” index in the Pacific basins is likely near record lows

Now let me be clear, We think our forecast for a big Atlantic season has merit. So far our ideas have. The high impact areas are where we think more than 50% of the total ACE index for the season will be concentrated, the yellow area 75%. So here is the map ( first issued April 7) and the impact storms so far 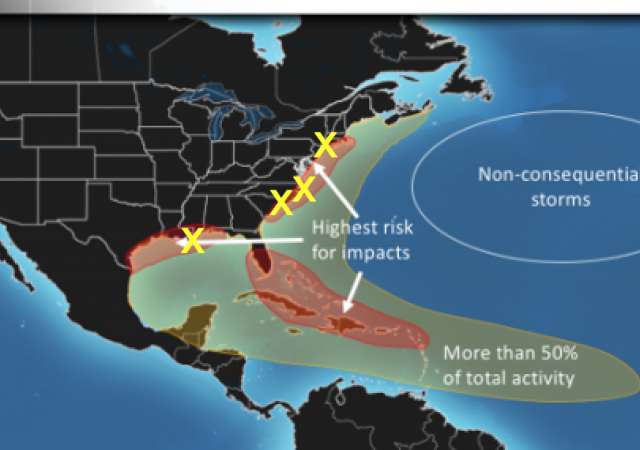 All in the high impact areas

A large part of this, and why so far, so good, is because we correctly ( again so far) thought the MJO would come out of the phases it had this winter, which promoted the very warm winter, into the phases that favor impact events on the North American coast, This chart of the MJO phases ( 8,1,2,3 are the big phases in the Atlantic basin while 4-7 are the down phases and also warm in the winter) speaks loudly as to the impact so far even from nontropical origin systems as they can quickly convert over in close warm water. All of the have formed in the favorable impact phases 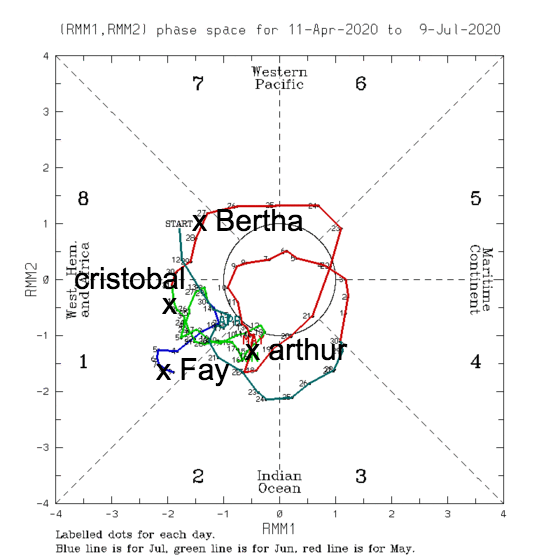 Now we just saw Cristina die in the eastern Pacific without becoming a hurricane, something that is rare for a storm lasting that long on that track. And with good reason, The JMA showed massive sinking ( yellow and beyond) in the Pacific basin.

This effectively shuts down much of the Pacific basin, When we look at outgoing longwave radiation in this period, which can approximate where its dry since the sun is out so much, the surface is warmed and hence more OLR The deeper the blue, the more the outgoing radiation and the dry air is indicative of sinking air, a big enemy of tropical cyclones

Look closely at the area just west of the dateline, and the entire basin.

( this is from the Physical science lab and their color scheme is opposite the JMA, The yellow in the JMA is the sinking, on the charts below its the blue)

You can see there is massive sinking going on there

Now during the winter, notice that area near the equator, just west of the dateline

that is the sweet spot for phase 6 of the MJO . Less than normal OLR means more convection is going off releasing heat into the high levels of the atmosphere and in that position it pumps the ridge south of Alaska near the dateline. When that ridge is there, it puts a trough in western North America and a big ridge across much of the US,  It tightens the arctic jet to the north, meaning a positive Arctic Oscillation, opposite of the patterns that send the much-hyped  “Polar vortex” ( blocking patterns have been happening thru the years) Hence the very warm winter

But these are natural phenomena, The reason for the reversal is the sea surface temperatures are cooling in the ENSO regions of the Pacific as the La Nina comes on, The change in the anomaly of the SST is nearly as important as the SST itself as if it has not reached a certain equilibrium the reversal of the sign of the upward motion continues to feedback, And so the sinking areas continue to grow and the areas of upward motion shift, But this is not at all related to co2 but instead a natural process we see ( it goes the other way too, shifts back to the other phases) The trick is to catch it before and models are notoriously bad at forecasting the MJO and don’t even attempt it after 40 days. Now think about what that means. The most important source of energy for the global pattern can not be quantified to help with the long-range forecast. So its high risk to make a forecast off a forecast, We thought the MJO flip would start earlier in winter, and instead it waited for April and May which turned very cold and so the winter forecast took the hit as it stayed warm Feb and Mar. But we knew it was coming and so we learned from that and made the forecast we did going forward. But the danger is that it tries to change back, I don’t think that is going to happen, so I have confidence that African wave season is going to be impactful, We have been looking closely since spring at 2005 The global SST pattern is where we thought it would be, with the warm pool in the NE Pacific, the cooler tongue now coming off the west coast of S America and the Main Development region the Atlantic looking alike, though the cooling in the gulf was caused by hurricane Dennis moving through

But here is the point, The extreme here of no hurricane-intensity numbers anywhere on the planet since June 3, a record-breaking one, intuitively is a positive as far as climate.  But its also consistent with an idea I have been pushing this for close to a decade,  I have explained several times why warming, the way it is, maybe a limiting factor on tropical cyclone impact on N America and even mainland Asia. Long tracked storms if convergence is distorted ( too much low-pressure north of the tropics) may mean the storm as it approaches the coast spreads out. The danger is the short tracked storm that hits at max intensity when the pattern gets disrupted, You saw classic examples of Harvey and Michael as they both wound up within 48 hours of landfall. But in the last 30 years, most storms that hit were not at their peak intensity,  For instance, Katrina, Rita and Wilma all had weakened

In any case, the total energy budget of the planet has to be increasing, But it may be like someone getting heavier but the weight gain is all fat, How do I mean that? Well if you put on weight in the wrong places, it decreases your overall look. If you warm the globe in a distorted fashion more to the north than to the south, you decrease zonal potential energy and so convergence and Global Wind Oscillation and SLP  patterns are changed. The danger, of course, is with more energy available if you do get the right set up, then you can get the powerful events that reach the coast at peak But over the last 25 years, that is certainly rarer than the 30s, 40s, and 50s which as a colder time planet wise.

So while 6 named storms have developed  2 likely would not have been named years ago, The idea of the weaker storm further north and more of them,  is not a significant negative factor for the US. In addition, while 6 named storms have developed the ACE index per storm is at the lowest level for 6 storms on record.  Combine that with what is going on in the Pacific. the real extreme is a non-extreme, With a lower than normal tornado season and a  near-record low hail season, is that not a positive? When it goes back up again and it will, because the weather swings back and forth, we are most certainly  going to hear from people weaponizing the weather, without any mention of how quiet it has been, And since we have been saying since March the Atlantic basin should have a big season, hopefully, pieces like this give you a perspective when all the usual hype starts again