“Farming in Fear” Watch the trailer

We’re so proud of Martha Boneta!

When Big Green groups and grasping bureaucrats tried to bully her, this local farmer said “enough is enough,” took them on, and scored a major victory for property rights.

Thank you to every one of CFACT’s friends who stood with Martha and all Virginia farmers, signed petitions and generously funded the good fight.
Keep an eye out for the documentary “Farming in Fear” which just won two film festival awards for telling Martha’s story.

Watch for CFACT’s Bonner Cohen who fought patiently beside Martha and features in the film.

The right to property is a fundamental liberty. 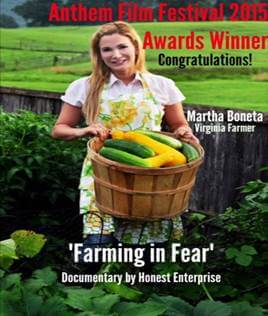 In 2006, Martha Boneta bought a tattered, two hundred year-old farm in Paris, Virginia on 64 beautiful acres about an hour West of Washington DC.

Liberty Farm was the realization of Martha’s childhood dream to become a working farmer and bring homegrown, organic produce to her community. After two years renovating the property, she planted crops and brought livestock to the farm. There are flocks of free range chickens, guinea hens, ducks, geese, turkeys, and emus; a herd of goats and sheep, an alpaca, two cows, a pony, and a fat pig named Oliver.

Martha also keeps bees and sells the honey, along with handmade goats milk soaps, wool, and fresh eggs from her farmhouse.

But corruption and abuse of power threaten to put Liberty Farm out of business. Over the past two decades, Fauquier County has built a reputation in Virginia for being run by a connected web of politicians and local officials aligned with an environmental group and powerful landowners dedicated to preventing commercial activity and development in the area.

And Martha Boneta has been at the center of it all.

“Farming in Fear” pieces together Martha’s story from interviews and documentation, tracking the nearly 10-year ordeal she’s gone through just to earn a living in spite of corrupt local ordinances, abusive management of her conservation easement, and personal attacks through the introduction of an amendment to Virginia’s Right to Farm Act called the ‘Boneta Bill’, designed to protect small farmers so that what happened to Martha never happens again.