The greenhouse effect in more depth

The effects of the greenhouse gasses start with the sun‘s golden rays coming to Earth, as seen in Figure – 1. Warming the planet during the day with a Total Solar Irradiance (TSI) average of about 341 Watts per square meter W/M2.

Some of this energy that approaches the Earth is reflected back to outer space by the clouds, the air, the oceans, the Earth‘s ice cover, and a little by land. The part that reaches the Earth’s system is about 161 W/M2, or about 47 percent, where three things start to happen to these sun rays. The first part is used to power the planet‘s needs, like plants that use the sunshine for photosynthesis and animals to breathe and keep warm.  Humans get clean energy with solar electricity, farmers to grow their crops, and beach lovers to get a great tan.  The second part is stored in the warm air we enjoy and warm oceans and seas when we swim in the summer on Cape Cod and year-round in Florida. 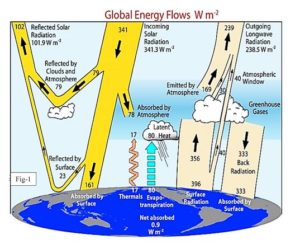 This heat is also stored in parking lots and streets, and buildings that stay warm for many hours after dark.  At night, most or all of this stored heat radiates and convects back up to the air. Some of this heat is temporarily stored in the air and clouds, and the rest radiates back to outer space.

This heat that arrived on the Earth’s surface (land and oceans) must find its way back to space for the Earth to remain in the thermal balance we call “The Goldilocks Zone.”  If too much heat went straight back to outer space, it would cause a big problem, which we actually see in high altitude deserts. There, during the day, the Earth gets very hot very quickly. The air is super thin, there are few clouds, and more of the sun‘s rays get through to heat the soil.  But at night, all that stored energy in the earth and rocks is quickly radiated and convected back towards the sky.  Some of this heat goes up by “Thermals”, that is like a hot air balloon going up the atmosphere. Some goes up by “Transpiration”, like that cooling feeling you get when you come out of the pool, and the wind dries your skin. But most of it goes up by radiation, which we will discuss here in detail because that is the heart of the greenhouse effect.

This radiated heat comes in two forms, longwave and shortwave infrared. Most of the heat is radiated directly to outer space in the form of longwave radiation. But, the heat in the shortwave is captured by the greenhouse gasses and water vapor and held for a while and warms up the air. After it has warmed up the atmosphere and clouds, the shortwave s becomes longwave and finally escapes to space. The fundamental questions in understanding the greenhouse effect are:

Climate scientists, dedicated to the scientific method, are only beginning to scratch the surface of these questions and more questions remain open that can be scientifically explained.These greenhouse gasses and water vapor essentially form a blanket around the Earth. In a perfect scenario, the Earth will radiate back to space during the night, the amount of energy equal to the sun’s input energy received during the day.

However, if more heat to be trapped and stored in the air, the clouds, and land and oceans and not enough radiated into outer space, it would not be a good thing.  If this keeps going too long, it will mean each new morning would start out being a little warmer than the day before, and so on.  After some time, it would keep getting warmer and warmer and cause significant changes not only on all life (plants and animals) but also the geography of the entire planet.  We see a dramatic example of this on Venus, where CO2 makes up nearly 100 percent of the atmosphere compared to 0.04 percent on Earth. Even here on Earth, in the far distant past, the oceans rose to alarming levels, and the planetary temperatures increased so much that there was little ice on the surface. Tropical plants and animals thrived even in the polar regions.  For this reason, many scientists sound the alarm about global warming.

The cause of this imbalance, meaning more energy coming to Earth from the sun than is radiated back into space, is due primarily to water vapor and a small amount by the greenhouse gasses.  The primary greenhouse gasses include CO2, methane, nitrous oxide. But most importantly, we must understand two straightforward realities:

·      Exactly how much greenhouse effect is contributed by each gas, and

·      Exactly what portion of each greenhouse gas is human-made versus nature-made.

Fortunately, brilliant climate scientists have already made this analysis, and their findings are presented in Figure – 2[i] below. A summary of the significant revelations include: 1.    Water vapor accounts for 95% of the entire greenhouse effect, which is nearly 100% nature-made.

2.    The total carbon dioxide contribution to the greenhouse effect is only 3.168%, of which the human-made portion is only 0.117%

3. Of the entire greenhouse effect, nature accounts for 99.72%, and the human-made contribution, including all human-made gasses (CO2, methane, etc.), is a mere 0.28%.

We call weather nothing more and nothing less than the Earth‘s air, land, and oceans attempting to eliminate the temperature and pressure imbalances caused by the sun heating one part of the planet and not the other. These imbalances are imposed on Earth by the asymmetrical heating caused by the sun.  Consequently, the weather is how the Earth responds to these forces imposed on the planet by the ever-changing dynamics of what happens within the sun and the relative position of the sun concerning the Earth.

Weather patterns over 15 to 30 years are what we call “climate.”  We then learned that weather is challenging to predict. Even a 7-day forecast is typically only accurate about 56% of the time. Imagine how challenging it must be to predict climate forecasts 5, 10, 30, or 50 years out. Lastly, we learned that the human-caused contribution to the greenhouse effect is small, trivial.

Science is never settled. Science is a journey with unknown destinations.

Portions of this article are excerpted from the 2020 book A HITCHHIKER’S JOURNEY THROUGH CLIMATE CHANGE by Terigi Ciccone and Dr. Jay Lehr. The book is the best source for parents and grandparents to explain climate change reality to their children.  It’s also recommended for young teens and Gen-Z as they will bear the consequences of climate change folly.

Available from amazon at – https://www.amazon.com/Hitchhikers-Journey-Through-Climate-Change-ebook/dp/B086R49RS6  in kindle, black and white paperback and large format full color figures. Or send email to [email protected].

[i]   https://climatecite.com/water-vapor-rules-the-greenhouse-system/  by Dr. S. Fred Singer, atmospheric physicist, Professor Emeritus of Environmental Sciences at the University of Virginia, and former director of the US Weather.