This Flag Day remember how high the stars and stripes have flown!

One of the most iconic images from the Apollo 11 mission is of Buzz Aldrin saluting the American flag on the surface of the Moon. The decision to plant the American flag on the Moon was made rather late in the lead-up to the mission. NASA Administrator Thomas O. Paine created the Committee on Symbolic Activities for the First Lunar Landing and appointed Willis H. Shapley, NASA Associate Deputy Administrator, as its chair on Feb. 25, 1969. The committee received advice from the Smithsonian Institution, the Library of Congress, the Archivist of the United States, the NASA Historical Advisory Committee, the Space Council, and congressional committees. The most common suggestion received was to carry an American flag and plant it on the Moon, and that is what the committee recommended to Administrator Paine.

Robert L. Gilruth, Director of the Manned Spacecraft Center, now the Johnson Space Center in Houston, selected Jack A. Kinzler, Chief of the Technical Services Division, to design a flag and mechanism to allow it to “fly” in the airless lunar environment. With less than three months before the first Moon landing flight, Kinzler, assisted by Deputy Division Chief David L. McCraw, designed the mechanism in just a few days. The flag itself was a standard 3-by-5-foot nylon flag, with the only modification being a hem sewed along its top edge to allow a metal rod to slide through – that gave the flag rigidity in the windless environment so that it appeared to wave. The flag was attached to an 8-foot flagpole that the astronauts planted into the lunar soil.  The vertical and horizontal poles were gold-anodized aluminum tubes. The overall Lunar Flag Assembly (LFA), including a stainless steel case to protect the flag against temperature extremes, weighed 9 pounds 7 ounces. Thomas L. Moser of the Structures and Mechanics Division performed the analysis that showed it would be safe to attach it to the forward landing leg of the Lunar Module (LM) and that it would withstand the heating from the LM’s descent engine during the landing. Moser, Kinzler, and William E. Drummond of the Parachute Support Section carefully folded the flag into its case. Kinzler hand-carried the flag assembly to the Kennedy Space Center where workers attached it to the LM Eagle’s landing leg just three days before launch.

Watch a video of Apollo 11 astronauts Neil A. Armstrong and Edwin E. “Buzz” Aldrin deploying the American flag on the lunar surface on July 20, 1969. The split screen shows the live TV downlink on the left, synchronized with film taken by an automatic camera set up inside the LM on the right. The photograph above is superimposed in the video at the time that Armstrong took it. 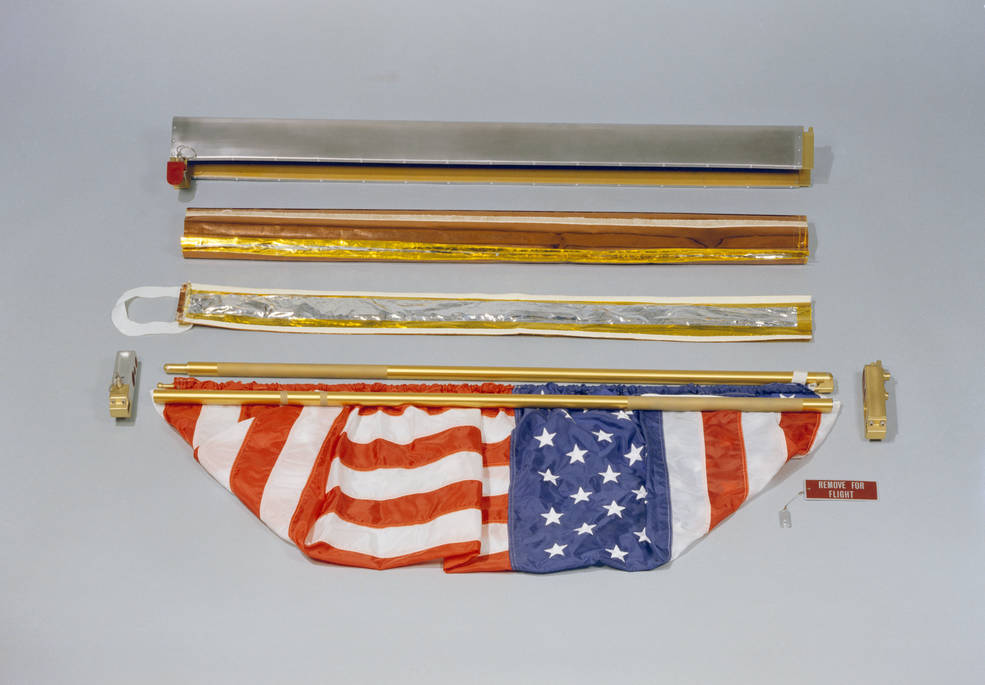 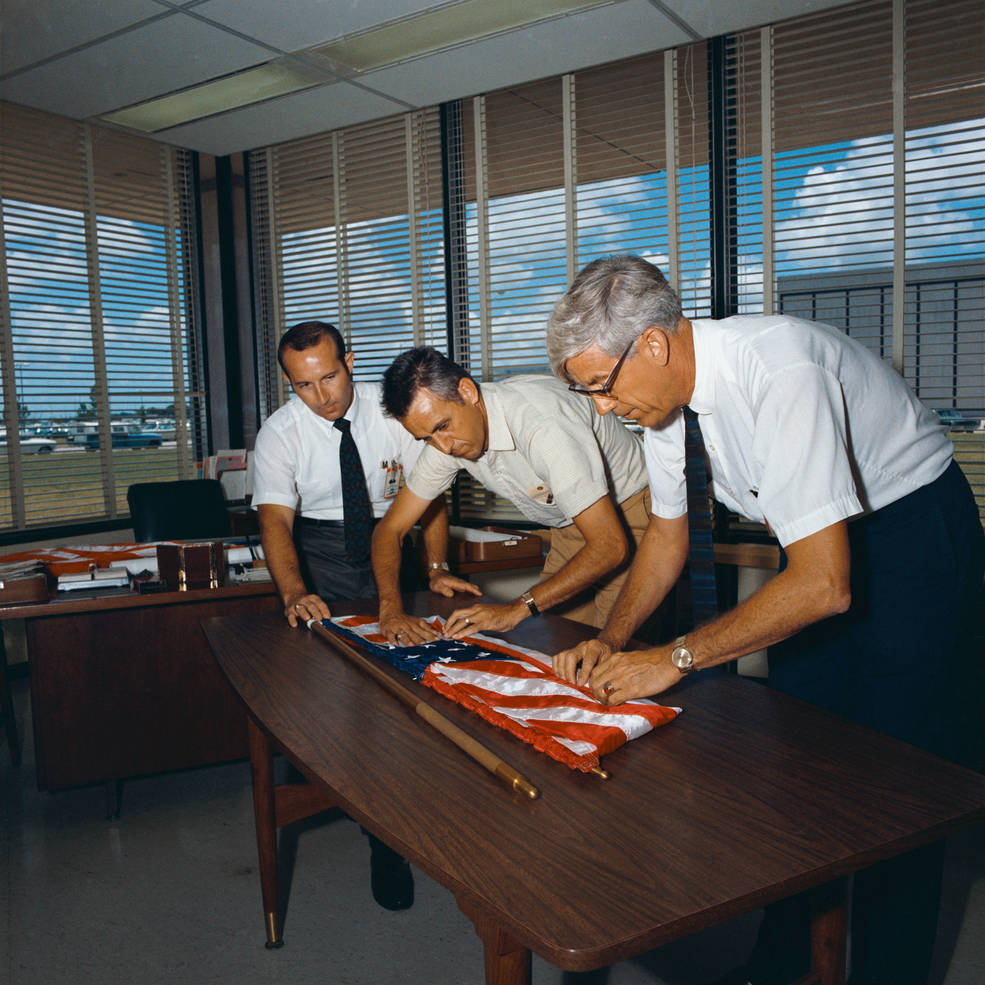 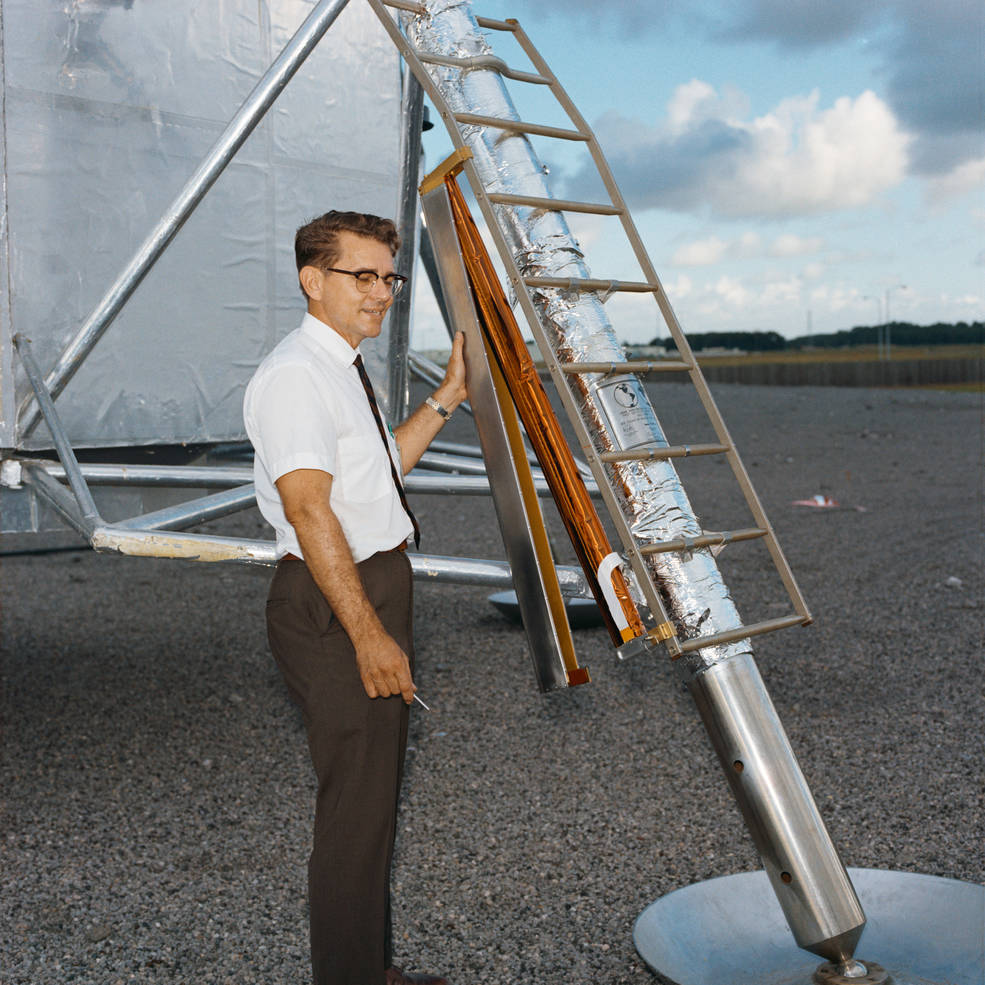 Left: The Lunar Flag Assembly prior to assembly and installation on the LM Eagle. Middle: Folding the flag, (left to right) Moser,
Drummond, and Kinzler. Right: McCraw demonstrating how the LFA was attached to the LM’s landing leg.

Over the next three years, five more flags joined the one left by Apollo 11. Photographs taken in recent years by the Lunar Reconnaissance Orbiter (LRO) show that the flags left by Apollo 12, 16, and 17 appear to be still standing. The first flag left by Apollo 11 cannot be seen and is presumably no longer standing. The film taken from inside the LM as the astronauts lifted off from the Moon begins after the LM is already airborne and the flag cannot be seen, but Aldrin claims he caught a glimpse of the flag getting knocked over during liftoff. On the later landings, astronauts planted the flags farther from the LM. The status of the Apollo 14 and 15 flags cannot be determined conclusively, although it looks like the Apollo 14 flag took quite a beating from the LM engine exhaust during liftoff. The flag that Apollo 17 left on the Moon was somewhat unique. It was a flag that went to the Moon and back on Apollo 11, hung on the wall in Mission Control until it made a return trip to the Moon, this time to stay. An identical flag made a round trip on Apollo 17 and now hangs in Mission Control. 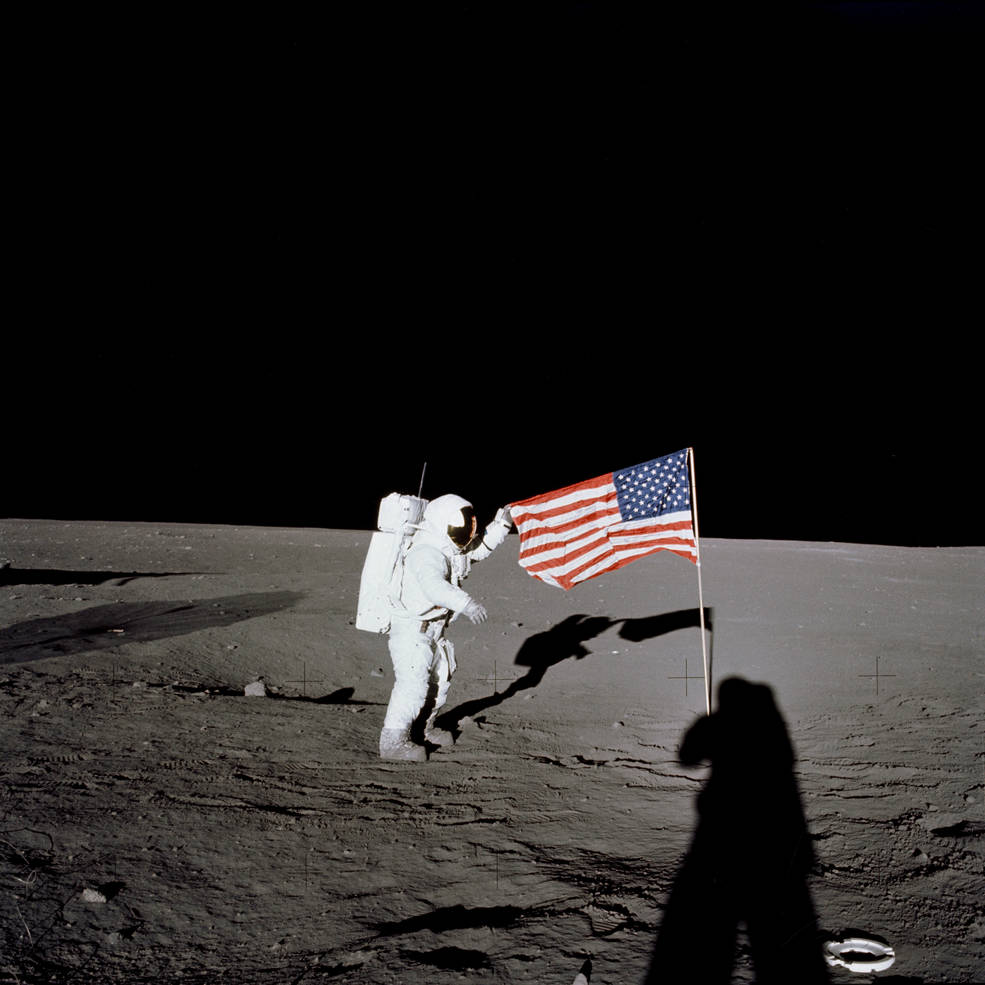 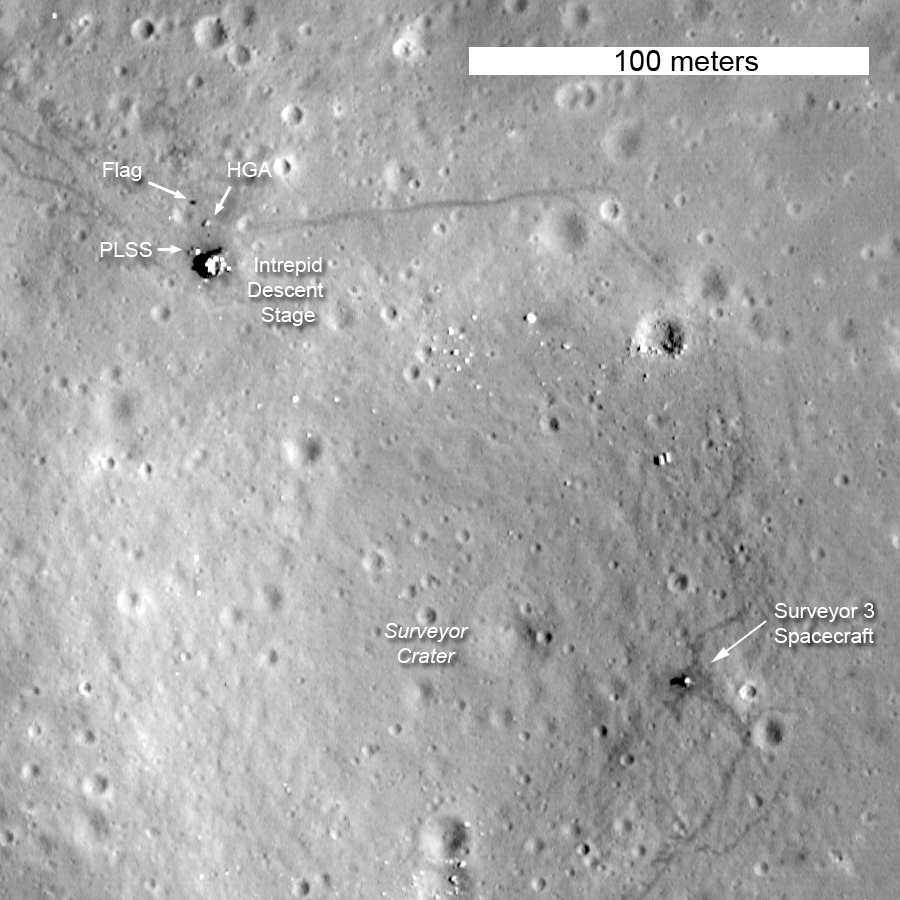 Left: Apollo 12 Commander Conrad holding the flag at the Ocean of Storms landing site.
Right: Orbital view of the Apollo 12 landing site from LRO taken in 2012 shows the shadow of
the flag (at upper left), indicating that our flag is still there. 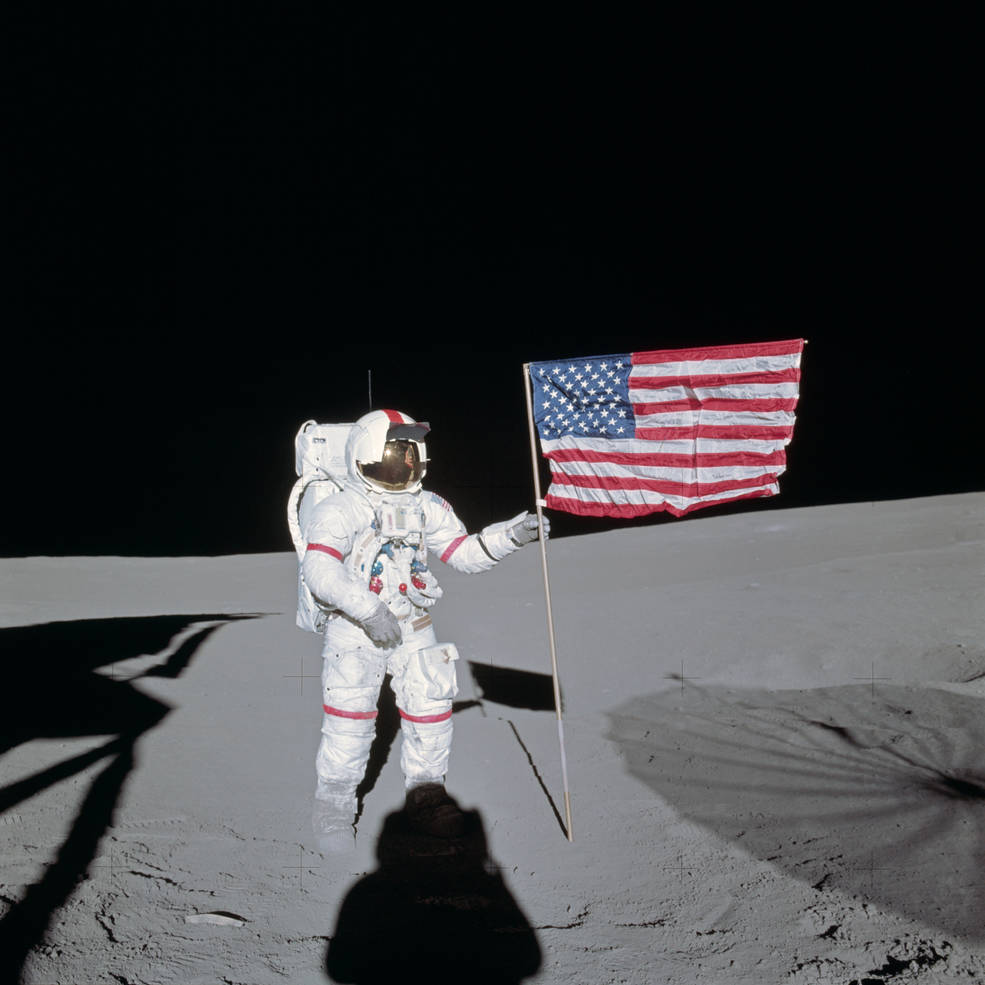 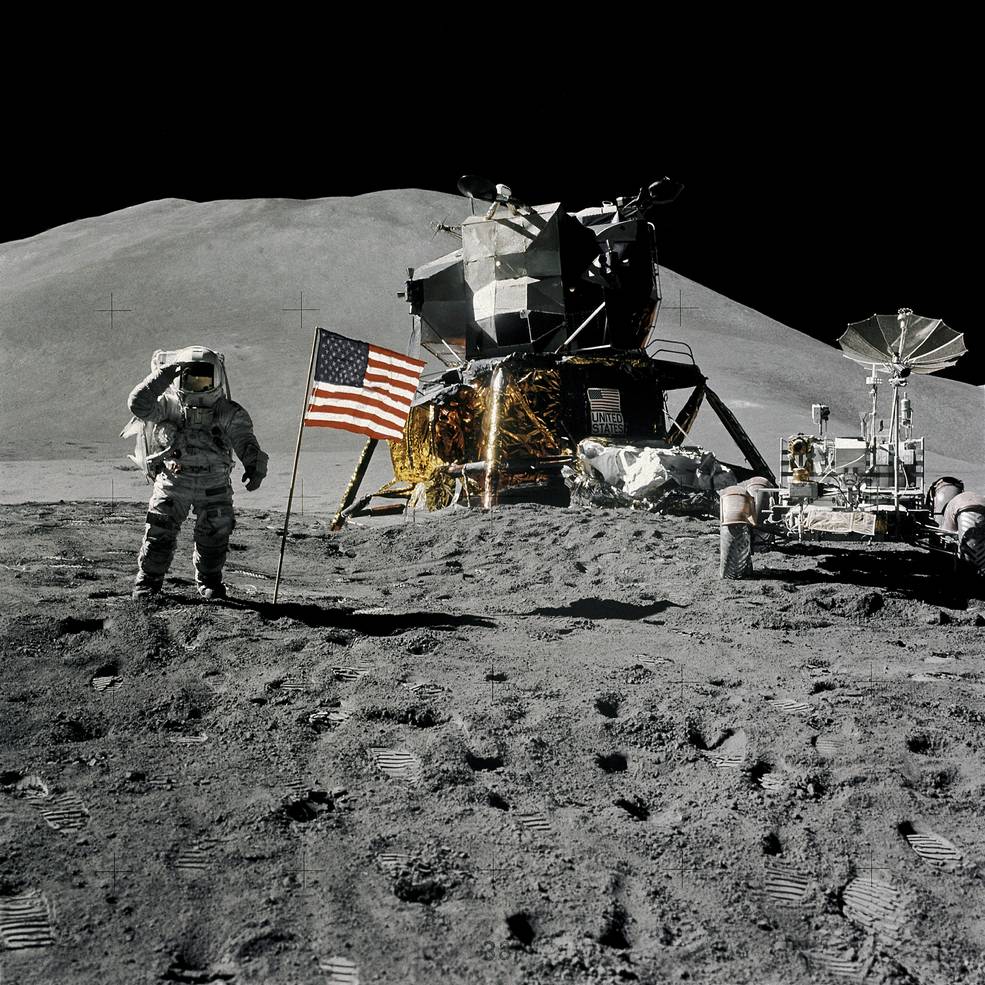 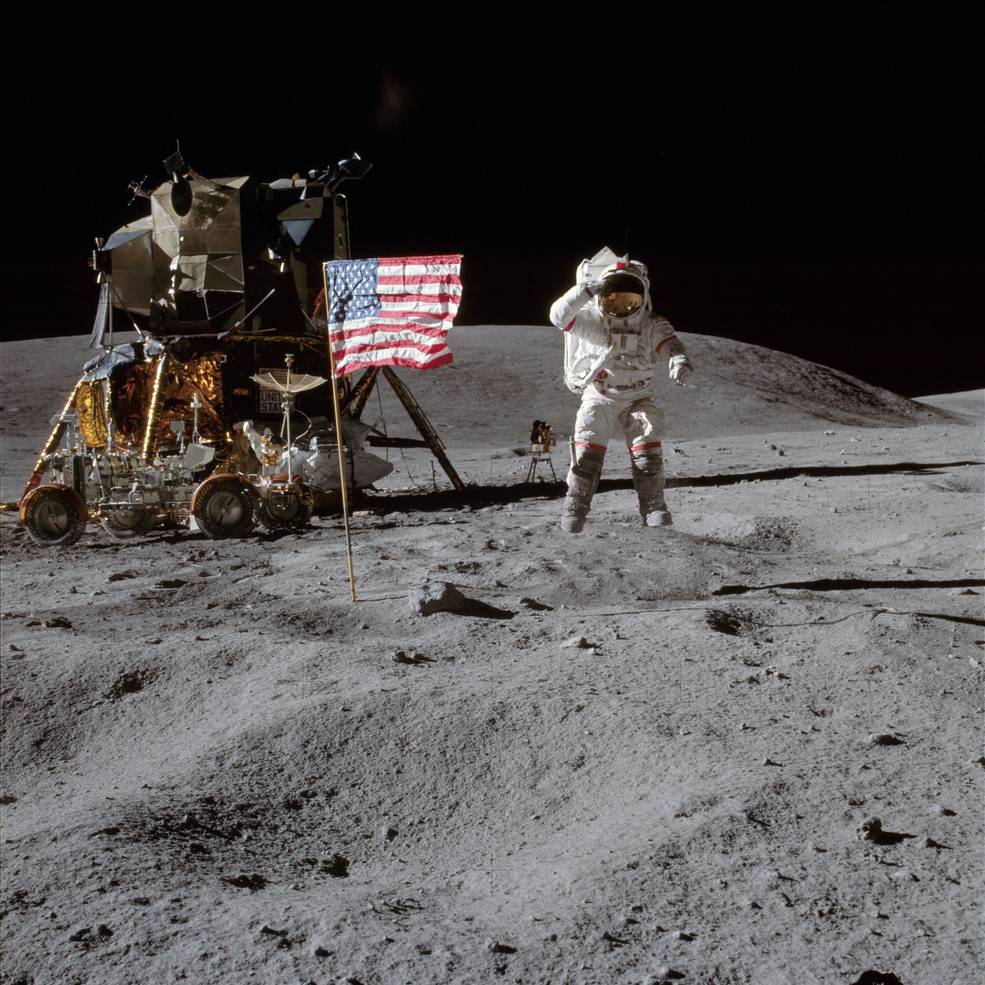 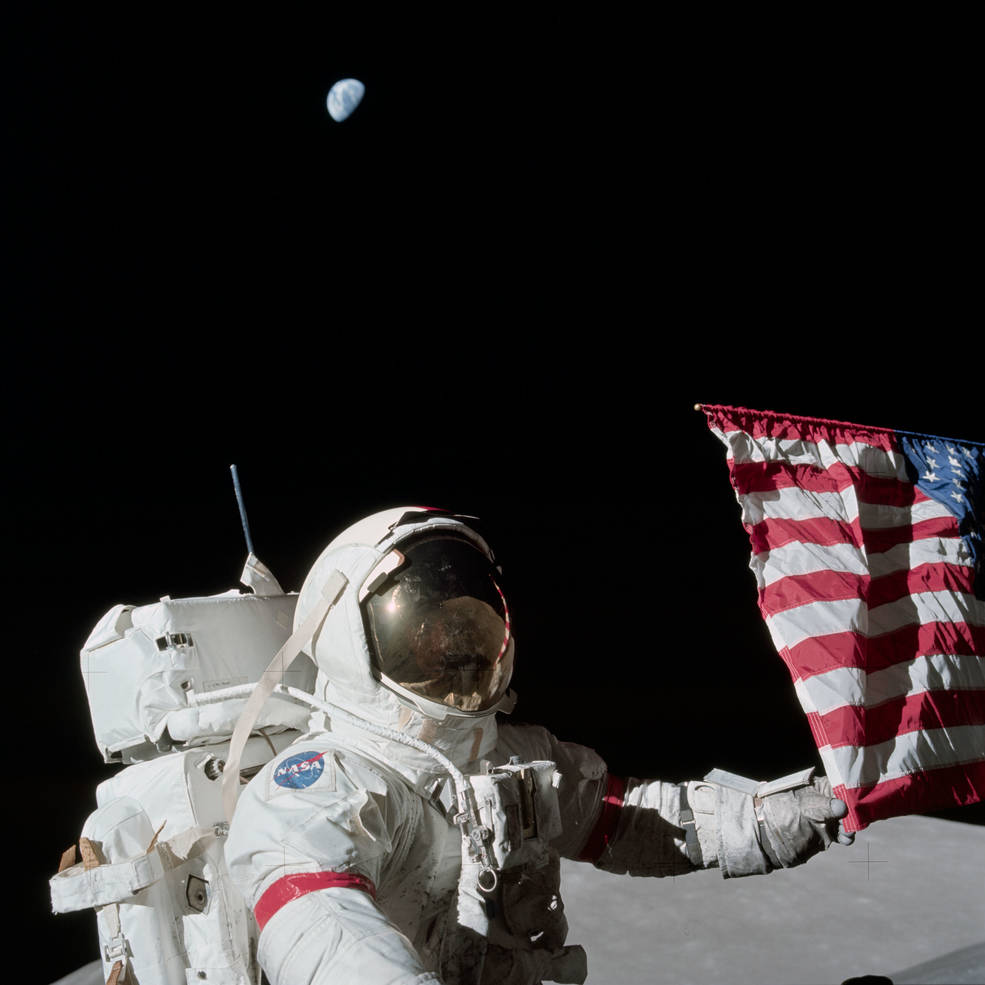 The first American flag to leave Earth was aboard Alan B. Shepard’s Mercury-Redstone 3 flight in May 1961. The success of this flight that placed the first American in space inspired President John F. Kennedy to commit the nation to landing a man on the Moon and returning him safely to Earth before the end of the decade. The 23- by 36-inch cloth flag came from Cocoa Beach School located near Cape Canaveral, Florida, and was rolled up and stowed in a wire bundle in the Freedom-7 spacecraft. Shepard was not aware the flag was there until after his mission was over. The same flag flew into space again in 1995 aboard the STS-71 Space Shuttle flight, the 100th American crewed mission that also marked the first docking of a U.S. space shuttle to Russia’s Mir space station. After returning from space for a second time, the flag was presented by Shepard and STS-71 commander Robert L. “Hoot” Gibson” for display at the Astronaut Hall of Fame in the Kennedy Space Center’s Visitor Complex, where it remains today.  John H. Glenn’s Friendship-7, the first Mercury orbital flight, was the first spacecraft to have an American flag painted on its outside. 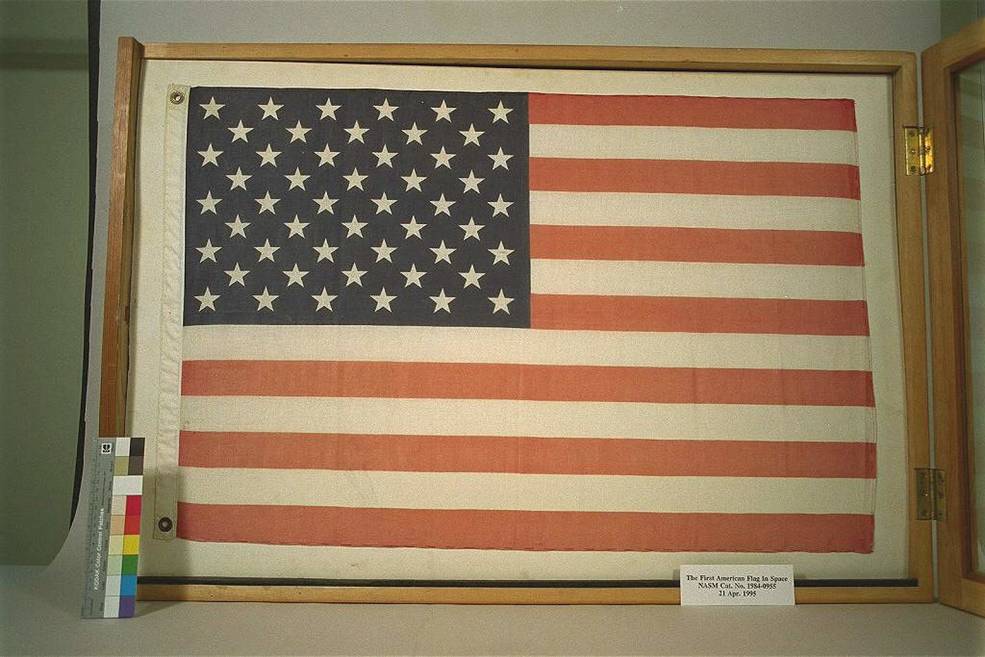 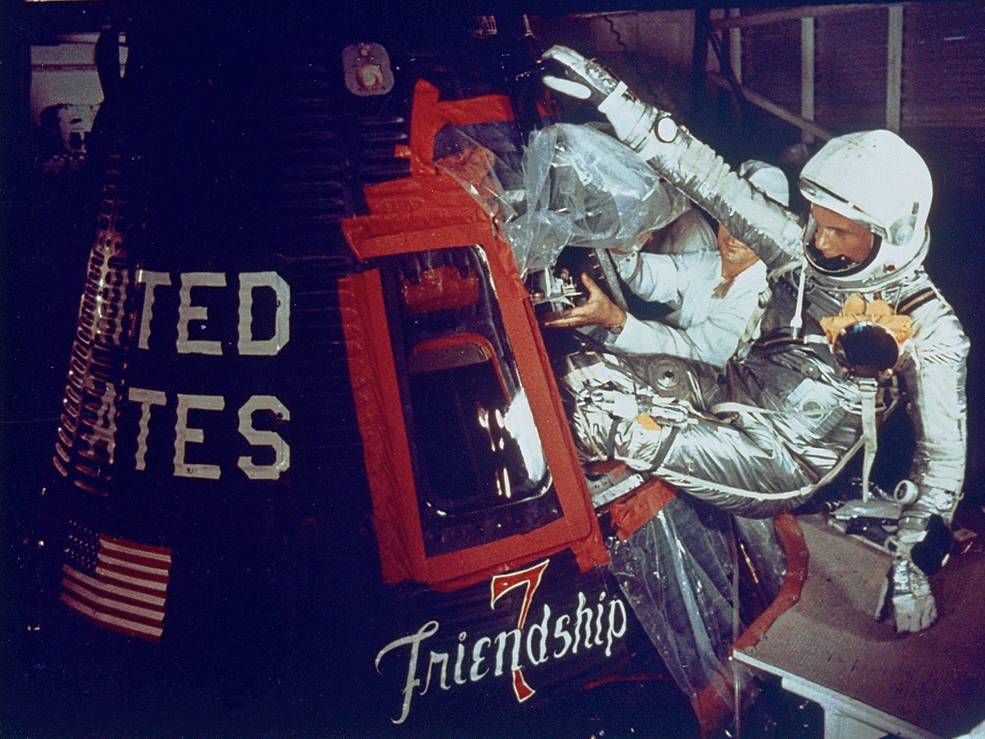 In addition to the American flags carried into space and to the Moon by astronauts, the Stars and Stripes have travelled to all eight planets as well as dwarf planets, asteroids, and comets, carried there by an extensive fleet of robotic explorers. The first flag on the surface of Mars arrived on the Viking 1 Lander, which made its touchdown on the red planet on July 20, 1976, exactly seven years after the Apollo 11 Moon landing, and during America’s Bicentennial year. Five American flags are leaving our solar system, aboard Pioneer 10 and 11, Voyager 1 and 2, and New Horizons. The farthest of those, the one aboard Voyager 1, is currently 11.7 billion miles from Earth. 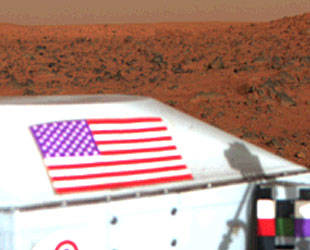 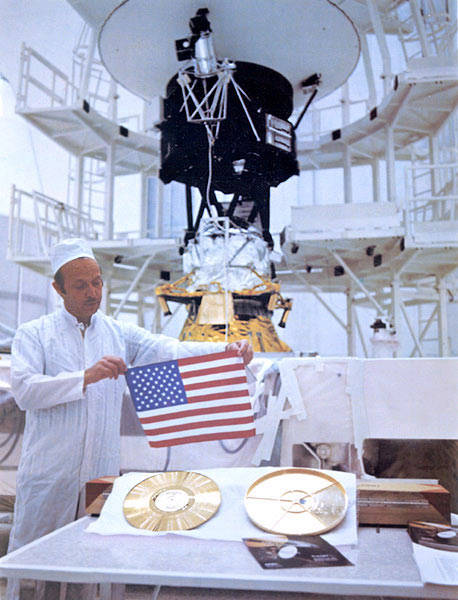 Left: First US flag on Mars in the Viking 1 Lander in 1976. Right: Project Manager John Casani displays
one of the U.S. flags that were placed aboard the two Voyager spacecraft.

With NASA’s plans to go forward to the Moon by 2024, American flags will be returning to the lunar surface, carried there by the next man and the first woman to land on the Moon. And soon thereafter, astronauts will hopefully be carrying American flags to the surface of Mars.