Well it is getting to be an annual thing just before NOAA comes out with their forecast( which I suspect is going to be close to ours, issued first on March 10 calling for a big season.  See our latest here:   https://www.weatherbell.com/may-2020-hurricane-season-update)   as sure as the snow melts 2 things happen  1) Hurricanes are worse than ever hype happens  2) Me exposing the lack of looking at other factors

So let us go to this USA Today article which is making the rounds:

The  First line of USA article Highlights leads to me being skeptical: Scientists studied 40 years of satellite images to reach their conclusions. 1) No joke ITS THE SATELLITE ERA, YOU DIDNT HAVE SATELLITES BEFORE THE 60S SO LIKE NOW  how can you tell what it was like then? 2)  So what if they are if its mostly out over the ocean? Dr Bill Gray forecasted this anyway 40 yrs ago! Bill Gray was no fan of man-made climate change ideas 3)  THEY HAVE BEEN WEAKER COMING TO THE  US COAST

If you were in a cold period in the Atlantic in the 60S-1980s and you went back to the warm cycle, what do you think is going to happen naturally?  And why isn’t the real premise of this is that the much-maligned for his AGW stance, Dr. William Gray, was exactly right, if this is true?

But is it true or does it not dig into enough details to give a more focused picture?.

So here are some mitigating factors that have to be brought up,   1)  Hurricanes now are like a patient in an ICU  unit, constantly monitored. We know everything is going on, We see them from above, even if in the middle of nowhere. A classic example was Wilma, at her strongest, her pinprick eye ( 2.3 miles wide) would have never been seen by satellites in the 1980s, let alone in the pre-satellite era. So we are seeing more and seeing them at their strongest. How do we know if the 1938 hurricane was not a 5 at some time out in the middle of nowhere?  Since that level of intensity is only reached for a relatively short time, a ship would have to have gone thru the center, and if you are sailing into a hurricane, chances are you are going to try to change course if you can to avoid that, 2) While hurricanes may be stronger over the water, they are weaker in general as they move in close to the US.  Let us take a look at major landfalls by decade, all maps from this site:

As usual, I  will use overwhelming force to make my argument. 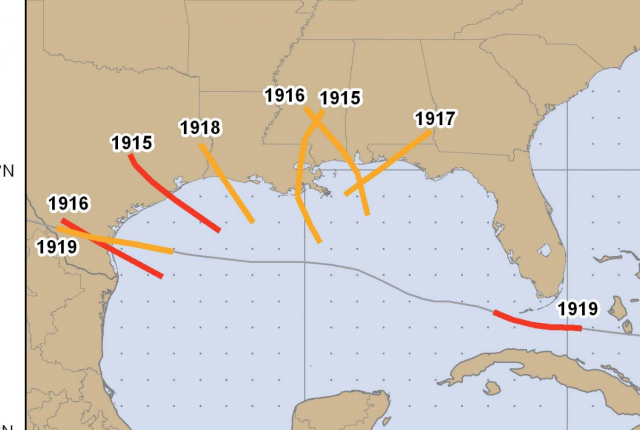 BTW  how do we know how strong those storms may have been before landfall, Katrine, Rita, and Wilma all hit as 3s  but because we were constantly on top of them,  we knew they had reached 5s: 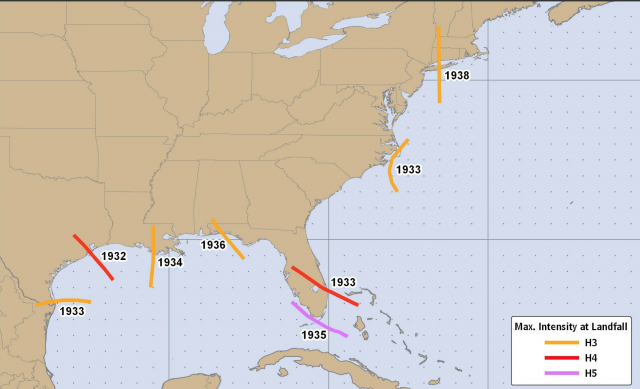 See that 38 storm? That could cause a lot of damage to former presidents Obama’s house at Martha’s Vineyard, raising the question ( which I will raise again in 1954, TWICE,)  Why, if you believed in what you were saying about climate change,  buy a house 3 feet above sea level and only a 5-foot barrier island in front of it, on a funnel-shaped inlet where a south wind and surge piles water up if you knew what hurricanes have done to New England and are saying it was worse than ever now? ( answer: because he can which is fine, its his call, but don’t blame man-made climate change for what is a matter of when, not if, naturally), maybe I am just jealous I can’t since it looks like a good place to ride out a storm if the house stands. Interesting  Wonder if I can out there and pal around so when one comes I can get out there).

The house is  reportedly on the north end of funnel shaped inlet.

I wrote this last year:

1941-1950 10 ( including one that would cause immense damage to Mir a Lago. Why would current President Trump buy a place there?   Because he can, but t least he isn’t saying things are worse ( BTW  people have been rooting for that place to be hit, so I guess we have a race going on here.   Wonder if this becomes a betting line at Vegas? What if they both get hit in one year?)  I would advise both of them if you are buying here, its not if, but when, there is big damage.  Not because of climate change, but because history  has shown us that:

Can you imagine living in S Florida in the 1940s with this?  It is not why it happened, but why  SHOULDN’T it happen again that is the question).

Donna had 3 landfalls,  and that counts, The total major landfalls is 12  Carol and Edna would be a real problem for President  Obama and even Donna Which I do not wish to see, but nor would I want to see him, if it happens again, blame climate change for something that obviously was a problem before, and a reason a radar “fence” was constructed on the east coast. 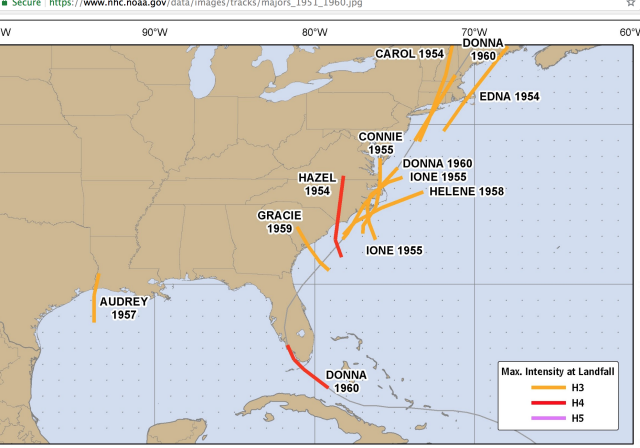 This was the most intense Ace/Storm decade on record. Averaging over 10/storm  Despite the headline on the article, Ace/Storm in the last decade is a tad over  8 The warm cycle of the Atlantic ended after that,  In hits heyday 1931-1960  the average major hit/decade was 10/decade or 1 a year. We are not even close as you will see in the last  30 years of the warm cycle. 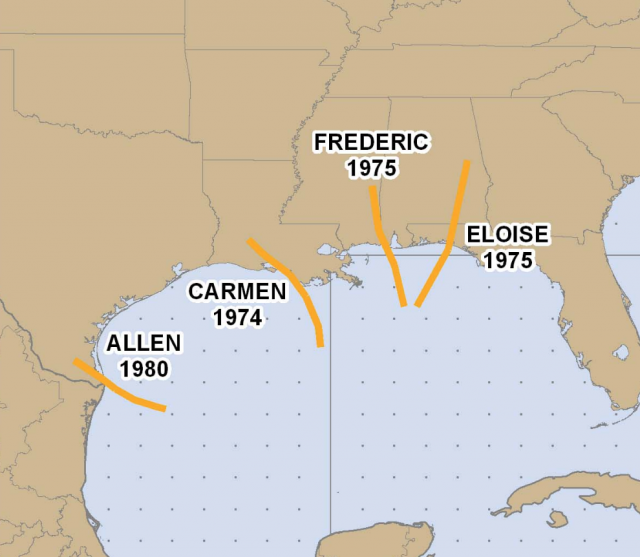 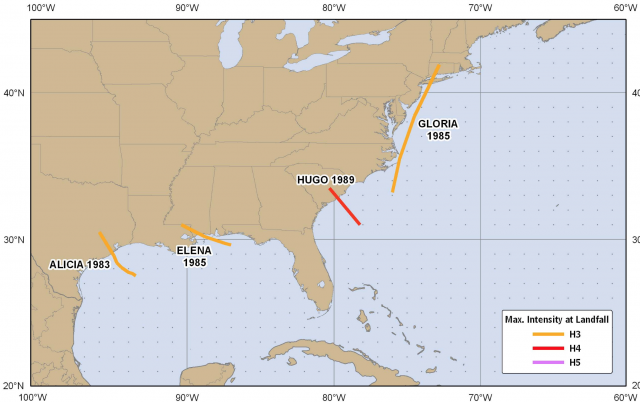 So this 30-year period in which the satelite era started in earnest during a cold cycle, had  5 majors hits/decade, or half as much,  But like so many things we see on the general issue today, we start at a point of convenience for the argument,  The only true metric we have that is consistent over the years is the intensity at landfall, because we know what they are doing when they hit land. It was very hard to figure out how strong the might have been over the water relative to what we have today,

So let’s get the to recent warm period and see if its worse than before, or just worse, as forecasted, relative to the cold period. 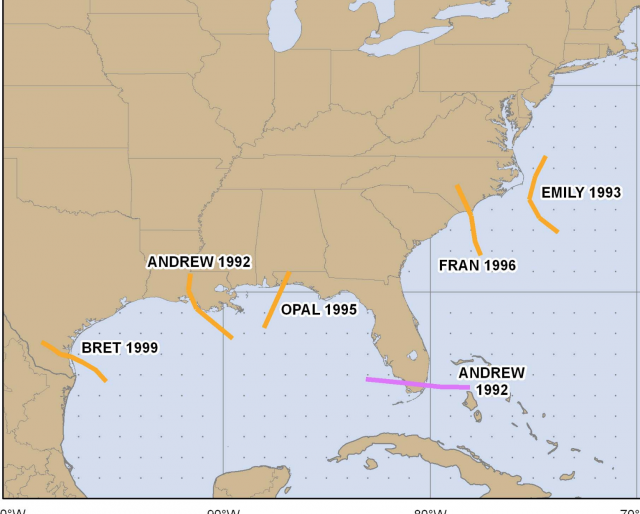 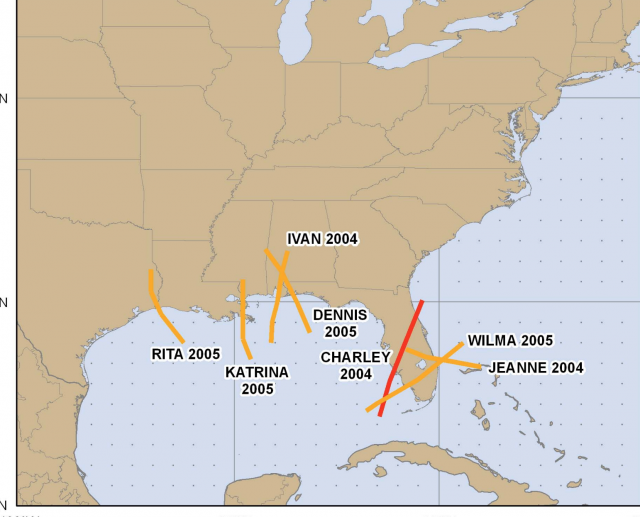 The most recent 10 years so far has been 3, let’s say I am right about this hurricane season and 2 majors hit, let’s make it 3,  That would still only be 6 in the last decade. If they are no major hits, it would have been the weakest decade since 1911!

So the average in this warm period is only as of now,  5.6/decade!

So what is going on here and why don’t articles like this touch upon this,

Well, the warming is likely having some effect, Those of you that follow me have followed my ideas that the warming of the oceans is distorting temperature and pressure patterns so big large mature storms  WEAKEN as they come to the US. If pressures over NORTH AMERICA  are lower than average during the hurricane season,  the convergence needed to maintain the major storm is more spread out,  Florence is classic,  It weakened as it came to the coast.  The very warm water northwest of it meant the storm was spreading out, taking convergence away from the core. Plus the very fact they may be stronger over the water means almost any factor can cause them to weaken, which does not support it being that strong. This leads to 2 conclusions, and you saw this with Michael and Harvey, The shorter tracked storms are more likely to be strongest at landfall.  2) It is my argument for seeding major hurricanes coming to the coast. to disrupt those processes (wrote this last year:  https://www.cfact.org/2019/08/30/no-nukes-for-hurricanes-but-maybe-its-time-to-restart-project-stormfury/)  Hurricanes need to focus energy at their core,  spread it out, be it by large scale natural distortion of warmth or pressure patterns,  or by seeding them, you will disrupt the storm, Given the exponential nature of the  Saffir-Simpson scale,  knocking it down 1 or 2 categories in the last 24 hours, would be a plus,  What have we got to lose?

So what is the conclusion,  1) The article, like many preseasons  “it is getting worse than” ever pieces, takes what has an arguable appearance of truth then projects from it, without looking at the counter-argument or the  BENEFITS  plainly seen in the lack of intense hurricane hitting the US the past…  SIXTY YEARS NOW.  2) We don’t know what we would have seen in the era before satellites, but we do know stronger storms were hitting the US more frequently   3) The research is very important but my skepticism on purpose rises from every year we hear this about this time I have been forecasting a big year for natural reasons since March 10, and most importantly  THEY SHOULD BE STRONGER  as per Dr. Bill Grays ideas,  which were made when there was less activity in a colder time.  So they may be stronger out over the water, but something is causing them to weaken and I suspect its the spreading out of convergence ( distortion of temperature and pressure pattern) that may supply a clue. What is needed for major hurricane hits on the US coast are higher than average pressures  over the Atlantic off  NE and Mid Atlantic, which would focus the lower than average pressures, and hence enhanced upward motion patterns, over the areas where hurricanes in the 30s 40s and 50s frequented more oftenl  Look at the pressure anomalies in the 11 years ending 1960, the height of the hurricane hit pattern on the US. 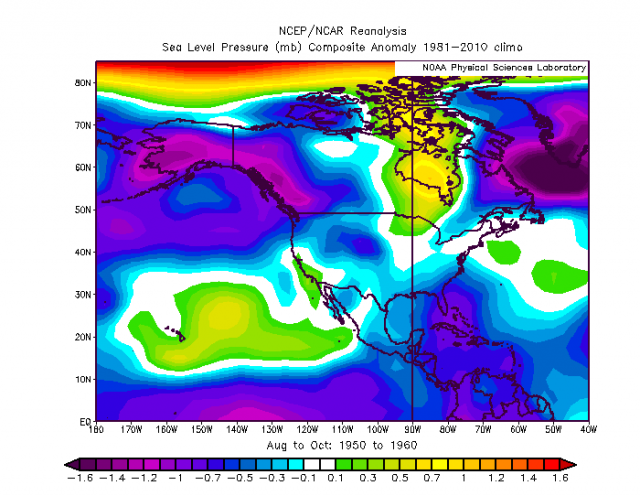 High pressure over southern Canada some higher pressure off the east coast but the center of lowest pressure anomalies  relative to the US and south, was over the tropics.

The center of lowest pressures relative to surrounding pressures is centered out of the tropics,  This distorts convergence away from the tropics, it is not so much the pressure anomaly, but where anomalies, relative to each other are, If large scale warming is distorting SLP patterns so the greatest anomalies are over the US rather than over the oceans close to the US, storms are more likely to weaken off their peaks.  We have a big season forecasted and the US generated CFSV2 fits the pressure pattern that would lead to one. 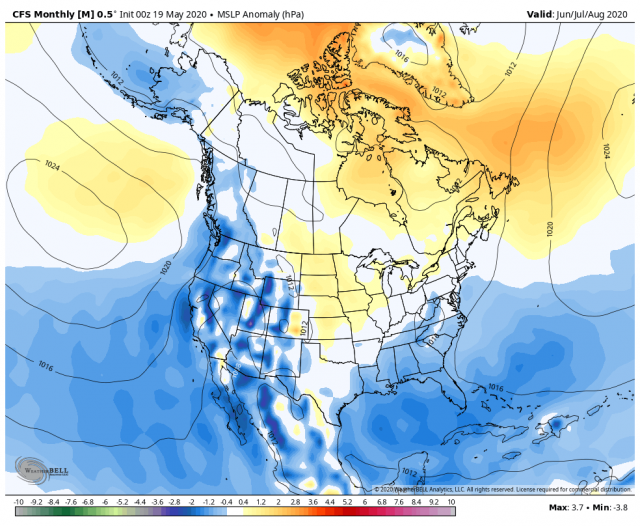 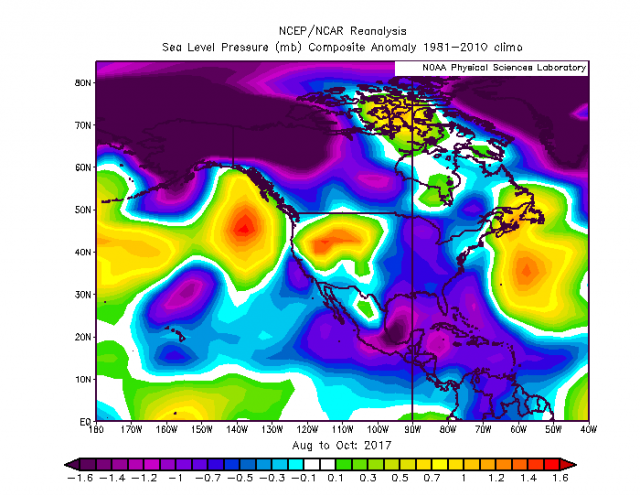 So to sum up,  I am grateful for articles like this, it is not that they have no value, and the research is great, I love looking at what other person has because it forces me to dig in and look. But articles like  also offer the chance for counter observations needed for honest debate,  I have no monopoly on the weather or tomorrow, but  can look at what the past holds and offer ideas that need to be seen.