Weather made (sort of) understandable: The primary elements: Water, land, and air

THE STRANGE PHYSICAL ASPECTS OF WATER

As we did in Parts One and Two of this series on weather, we shall start with what may be a shocking exclamation. Weather is nothing more and nothing less than nature trying to equilibrate the balance of all energy transmitted to the Earth by the Sun. It is a never-ending multi-level show of physics trying to overcome imbalances and irregularities too numerous to quantify accurately. Yet, we try hour after hour and day after day all across the Earth.

Water is the only substance that is capable of reversing density direction as a function of temperature. What does this mean? Like all other substances, water shrinks and gets denser as it gets colder. But unlike most materials, when water reaches about 4.0 C, the direction changes. As it gets colder and colder, it starts to expand, and the volume increases. That’s why we see ice on top of the waters and not at the bottom, and it’s why we see the tips of the icebergs float at the top of the seas. Those icebergs are about 10 percent less dense than the water they float on, and why 90 percent is below the water level. “So, what?” you might ask.? The “so what” is enormous! The most dominant factor is that if the ice formed and fell to the bottom of the oceans, there would be no fish in the world and no amphibians to crawl onto land and form other creatures.

• Conversely, if the warm water did not rise and stay at the top 100 meters or so, it may not have been possible for phytoplankton to grow and prosper. Trees, plants, and grasses only produce about 30 percent of the planet’s Oxygen, whereas the planktons and other marine vegetation produce 70 percent of the Earth’s Oxygen.

• Also, warmer water holds less dissolved gasses than colder water, and the colder it gets, the more it absorbs. We see this in our everyday experience. When we open a cold bottle of soda, carbon dioxide bubbles out. When we let the soda warm up while open, the Carbon dioxide comes out naturally, leaving it flat.

A fish like a trout or arctic char that needs more Oxygen than a carp is more likely to live in the colder waters and the carp in the warmer waters. This temperature difference rewards the more adventurous fish who braved the move to the colder waters with more Oxygen and more plankton, and more food sources.

This change in water temperatures allows the Earth to modulate the amounts of gasses in the air vs. in the water. The oceans will release more CO2 into the air to support the growing biomass that comes with warmer periods. Conversely, when it gets colder, the oceans reabsorb the CO2 because plant life has slowed down, and it saves the excess CO2 for when it cyclically warms back up.

Land includes our lawn and farmland and mountains, you and the seals in the north and penguins in the south pole and the grasslands in Argentina and mountains of Peru and Canada’s trees. Land heats very differently than water and air. The ground reflects very little of the Sun’s rays to outer space. That’s one reason why land heats up faster than water. Most of the heating of land and oceans is by visible light and IR and some extreme UV (EUV). On the beach, infrared is why you feel warm, and your skin burns, and UV is why you get sun blisters. Land absorbs heat very quickly but does not store heat as long as the oceans do, losing it just as fast. On land, the energy keeps getting absorbed until night comes. Then the warmer ground starts losing the heat back to the cooler air, mostly by radiation and a little by convection. This radiation keeps going up through the atmosphere during the night. When these rays reach the sky and clouds, some are absorbed (greenhouse effect), and some of the radiation goes directly into outer space.

Next, we find that not all land is created equal. Some materials, like asphalt and rocks and bricks and cement and buildings and streets, absorb more heat and faster and retain it longer than grasslands and wetlands and trees. This ability to retain heat contributes to weather and climate changes in the form we call” the “urbanization effect.” This urbanization effect can add as much as 2 or 3 or even 4 degrees Celsius in major urban areas compared to farmlands just a few miles away. Las Vegas is probably the best example. So, if you are a weatherman or a climatologist, this means that you must be very careful where you put your earth-based thermometers to make sure you don’t create wrong temperature profiles or trends.

The air is a very fluid mixture of many different gasses and many other aerosols, dust, and water vapor. Primary gasses include 78 percent nitrogen, 21 percent oxygen, and 0.04 percent carbon dioxide (CO2). This does not include the water vapors and aerosols that help make up clouds. The water content in the clouds can be minimal and wispy at the higher regions or form much more prominent and more massive clouds in the lower areas. Cloud properties are challenging to measure, quantify, and model.

As seen in Figure – 1, five layers are going up in the atmosphere from sea level to more than 600 kilometers.

These layers are very fluid and will change in different ways depending on what’s pushing or pulling them around, like the Sun’s heat, solar winds, and pressure differences. The exosphere is the highest layer at over 600 km. The air is thin and made mostly of hydrogen and helium, and it gradually fades into the vacuum of outer space. The troposphere is the layer directly above the Earth, where most of the clouds are and where most of the weather actions occur. Figure 2. plays a crucial role in the Earth’s water cycle and is an absolute necessity in the Earth’s ability to sustain all life; plants, animals, birds and fish, trees and whales, polar bears, etc. In the simplest of 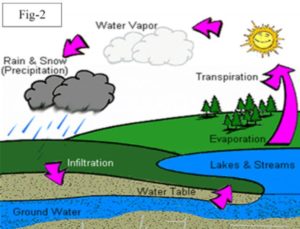 terms, the Sun heats the waters and forms water vapors that rise into the air. At some altitudes and temperature and barometric pressure, some of these tiny water vapor elements will meet up with an aerosol particle. The aerosol may be a dust particle from a volcano or farmland or industrial pollutant or a car or jet or whatever, and they become the seed around which the water vapor starts to condense and stick. An example of this can be seen in the sky as long cloud streaks behind a high-flying jet. Those white streaks are not smoke, and they are not pollution. They are clouds forming around the release of the aerosol by the jet engines and the water vapor sticking on them.

As more and more water vapor sticks to these seeds, they grow bigger and bigger, and more and more of these seeds accumulate water vapor until a cloud is formed. This natural process is called “nucleation.” The clouds keep getting bigger and bigger as more and more of these droplets are created. The cloud also becomes more substantial and more massive as each of these condensed water vapor droplets keeps getting bigger and bigger. At some point, when enough of them are big enough, it starts to rain or snow. As the rain droplets fall down the sky towards Earth, they will hit the ground as rain if it’s warm enough. If it’s a little bit cooler, it may come down like hail, or if it’s icy, it will be snow. This water is then spread across the land and seas. The plant life absorbs some, and some end up in rivers and lakes and seas and oceans, and the cycle starts again. seeding aerosols contributing to increased cloud formation. The dust and pollution gasses will form a barrier that shields the Sun’s rays and will cool the Earth. When there’s a massive eruption, these clouds can cover vast areas and last for months and may destroy a year’s worth of agriculture in the affected areas.

One such example occurred in 1816, known as the “Year Without a Summer,” due to the eruption of Mount Tambura in Indonesia. This super-eruption had mass ejections of billions of tons of dust, gasses, and aerosols into the atmosphere. This eruption significantly reduced the amount of the Sun’s energy from reaching the Earth, causing the average global temperature to decrease by 0.7–1.3 ° F. And huge failures of agriculture. See Figure 4. Regarding both weather and climate, where you live matters, and it matters a lot! If you live in the tropical areas, close to the equator, it’s where the Sun’s rays more directly reach the planet. As a result, it’s hot and generally much more humid. That’s far different from the colder temperate zones, and as you move away from the equator, north or south, the further you go, the colder it gets, and really – cold as you go closer to the north and south poles.

Figure 5. The greenhouse effect is an excellent benefit for the Earth. It’s the blanket that helps keep us in the Goldilocks zone by preventing more heat from escaping at night than it gets from the Sun during the daylight hours. Ninety-five percent of this greenhouse effect is due to the water vapor content in the air. The other five percent is contributed by the so-called “greenhouse gasses, where CO2 is the second-largest contributor, methane is the third, and other gasses fill in the balance.

By now, of course, dear reader, you realize that we have at best “sort of” made weather a little more understandable. But what we are sure of is that you have a better understanding of the complexity of weather and an appreciation of all-weather experts’ work and why predictions a week out are difficult. Perhaps also you will realize how silly predicting the Earth’s temperature decades from now.

Portions of this article are excerpted from the 2020 book A HITCHHIKER’S JOURNEY THROUGH CLIMATE CHANGE by Terigi Ciccone and Dr. Jay Lehr. The book is the best source for parents and grandparents to explain climate change reality to their children.  It’s especially recommended for young teens and Gen-Z as they will bear the consequences of climate change folly.

Available from Amazon at https://www.amazon.com/Hitchhikers-Journey-Through-Climate-Change-ebook/dp/B086R49RS6 In kindle, black and white paperback and large format full-color figures. Or send an email to [email protected]